The fate of the mountain caribou species now rests entirely within Canada and biologists are worried. 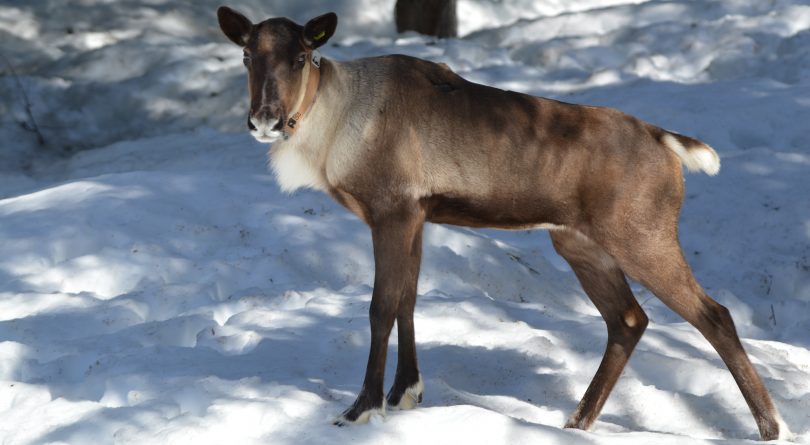 A mountain caribou believed to be one of the Gray Ghosts, a herd now facing extinction. (Len Edwards/Splatsin First Nation)

High in the mountain wilderness outside Revelstoke, B.C., lives Canada’s most unusual permanent resident: America’s last surviving mountain caribou. The cow was born into the South Selkirk herd, known presciently as the Gray Ghosts, which once roamed between southeastern British Columbia and the northern reaches of Idaho, Montana and Washington. By early 2019, the herd numbers had dropped so precipitously that biologists in both countries agreed that the best chance of survival for the remaining handful would be to capture them, move them to a protected pen in Revelstoke and integrate them with a northern Canadian herd with greater numbers. Three animals were moved early this year, ﬁtted with satellite GPS transmitting collars and released to join their northern Canadian cousins. Since then, biologists who track the animals believe two have perished, leaving the lone cow as standard bearer for the herd.

The departure of the Gray Ghosts means that caribou in the United States are now considered extirpated. But that didn’t stop the U.S. Fish and Wildlife Service last month from declaring all southern mountain caribou—including 15 remaining herds in Canada—an endangered species. The ruling requires habitat in the United States to be set aside for animals that no longer exist there. “It’s a bizarre timeline,” says Bart George, a wildlife biologist with the Kalispel Tribe of Indians who worked with the Selkirk herd until the bitter end. The ruling had been in the works for years, but by the time it passed it was too late. “It’s encouraging that caribou are getting some attention,” he says. “But it’s unfortunately not going to change a whole lot for us in the short term.”

The unusual cross-border endangered species ruling recognized that southern mountain caribou are a single population whose territory originally spanned both countries. Legally, the ruling holds no sway over Canada, says Sean Nixon, a lawyer with Ecojustice. But it may provide moral suasion for Canada to protect habitat here, he says. Andrea Santarsiere, a lawyer with the U.S. Center for Biological Diversity, which took the U.S. government to court to gain the ruling, hopes Canada and the United States will collaborate on a recovery plan and eventually reintroduce the animals to their former U.S. territories. If the species is to survive, habitat must be protected in both countries, she says. “You can say that the U.S. didn’t do a good enough job protecting their herd, but that herd also lived half of the time in British Columbia and those lands were not protected.”

Caribou numbers are plummeting in most parts of B.C. as well, and efforts to protect habitat for northern and southern herds are being met with serious resistance from logging and mining companies and snowmobile and ATV enthusiasts. Mountain caribou have evolved to thrive at high elevations in deep snow, far from potential predators. They survive harsh winters by eating arboreal lichens, which drape from the branches of old-growth trees. When old growth is logged, the food of the caribou vanishes, and the open areas create an ideal habitat for moose and deer—and booms in predator populations, says Leo DeGroot, a B.C. government wildlife biologist who worked with the Gray Ghosts in Revelstoke. The roads, snowmobile paths and seismic lines that cut into caribou territory double as predator highways.

The caribou are most vulnerable in summer when other ungulates move into their territory, drawing wolves and cougars in their wake. Because their numbers are low, each kill really matters, DeGroot says.

Conservationists in Canada and the United States agree that saving the mountain caribou will require the political will to ban industrial and recreational uses in key habitat areas. Caribou need “no-go zones” to survive, Nixon says. The U.S. Endangered Species Act is a law with teeth and—even though American conservationists did not get as much habitat set aside as they sought for the mountain caribou—the 12,145 hectares that were granted are well-protected. In Canada, there’s no law like that, Nixon adds.

While arguments over habitat protection in British Columbia continue, Canadian ﬁsh and wildlife ofﬁcials are green-lighting wolf culls to protect existing herds. Ofﬁcials are also considering a captive breeding program that might someday produce enough offspring to allow some to return to the United States, DeGroot says. However, no decision has been reached.

The fate of the species now rests entirely within Canada, say biologists, and DeGroot, for one, sounds less than optimistic about their recovery prospects. “I don’t want to be negative, as the Americans are very hopeful,” he says. “But it’s deﬁnitely a challenge.”

Adds Nixon, ruefully: “Based on what the provincial and federal governments in Canada are currently doing, there’s not much long-term hope for caribou.”

This article appears in print in the December 2019 issue of Maclean’s magazine with the headline, “The last Yankee caribou.” Subscribe to the monthly print magazine here.