Welcome to the great whites north

What are great white sharks doing in Canadian waters? A team of researchers aims to find out. 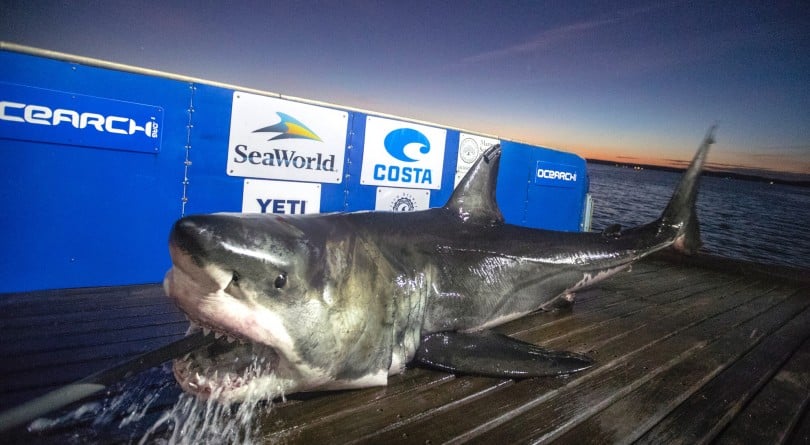 The great white shark, "Luna," getting tagged by the Ocearch team (Robert Snow/Ocearch)

From head to tail fin, Maeva Giraudo noticed that the shark’s wet body was smooth and firm like leather. She could feel the animal’s size and strength. Rubbed the other way, however, the fish felt surprisingly rough, like sandpaper. It was Thanksgiving weekend, and she was meeting Luna off the shore of Lunenburg, N.S., the town that inspired the great white’s name.

Giraudo, a research scientist with Environment and Climate Change Canada, has always admired sharks. She considers them the lions of the sea. For years, she has followed the work of Ocearch, a non-profit organization known for tagging and tracking the movements of these apex predators and giving them Twitter profiles, some of which have thousands of followers. When she learned the group’s team of scientists and fishermen was planning an expedition to Nova Scotia, she knew she had to be there.

For a few days in October, Giraudo took an unpaid holiday to jump aboard the MV Ocearch, a former crabbing vessel now used to catch and release sharks. Luna was reeled in by a small fishing boat known as the Contender, which uses a baited, non-harmful circle hook to catch sharks and guide them toward the Ocearch vessel, where a platform submerged under the sea hoists them out of the North Atlantic Ocean. A wet towel was immediately thrown over Luna’s eyes, while a hose pumped salt water into her mouth and gills. Then a crew of scientists and researchers went to work.

Luna was impressive. She measured nearly five metres long and 950 kg, one of the largest Ocearch has ever found. “I can’t believe how beautiful they are,” Giraudo says. Canadian waters along the country’s east coast may not be known for an abundance of sharks, but it appears to be a favourite destination for some like Luna. Ocearch followed the tracks of Hilton, a great white shark caught in 2017 near Hilton Head Island, S.C., who had been spending time in Nova Scotia. The sharks each have a tag on their dorsal fin that sends a location each time it pokes above the surface.

“We speculated that something was happening in Nova Scotia, perhaps mating,” says Bob Hueter, Ocearch’s chief science adviser. “It would be a critical piece of the puzzle.” The world knows little, after all, about great white sharks. Canada deems them “at risk,” yet there’s no estimate of population size in the country’s waters. “They spend most of their time hidden from us,” Hueter says. But the work being done here will help to begin ﬁlling in the blanks. And in the coming months, scientists expect to get a much clearer picture about what great whites are doing in Canadians waters.

Ocearch arrived in Nova Scotia hopeful they would find at least one shark. Over three weeks, the group caught and tagged seven. “It was beyond our wildest expectations,” says Chris Fischer, the founder and expedition leader of Ocearch. Fischer was the star of reality television shows like Shark Men and Shark Wranglers before shifting his attention to ocean conservation. This reality—along with Ocearch’s social media presence and a website that shows where their sharks are in real time—has drawn criticism from some in the scientific community.

RELATED: Why animals should be given the same legal rights as humans

Hueter, a shark researcher of more than 40 years, says the time for “waiting for that [research] paper to appear on a bookshelf in a dusty library is dead and gone.” He notes that scientists who work with Ocearch must agree to publish their results within two years. “We feel the clock ticking,” he says, adding that their goal remains the same as that of traditional researchers: undo the damage done to the oceans and help rebuild shark populations.

After a shark is caught, a handful of scientists step onto the platform to take blood, muscle and genetic samples—tests that reveal the animal’s reproductive hormones, stress levels, contaminants and diet. They measure length and girth, and attach acoustic and satellite tags. They perform ultrasound tests on females. Then, after no more than 15 minutes, the shark is set free. “It’s like watching a pit crew during a car race,” says Hueter.

The samples from the Nova Scotia expedition were taken for 15 research projects for 19 different institutions. Hueter ranks the trip as one of the most gratifying of his career, noting that Ocearch plans to return next year.

Giraudo thought she was just there to observe, but quickly found herself taking samples. Out of the great whites Ocearch tagged, Luna is the only one still in Nova Scotia; the others have headed for warmer waters. Luna was poking around the Bay of Fundy at the time of writing. Giraudo checks up on her regularly and guesses she’s enjoying the seals. “Luna’s a big fish,” she says. “Maybe she just likes it over there.” Will Luna be back next year? The scientists, and the great white’s 2,500 followers, will be watching.