'It came right through the shop': How to endure a B.C. mudslide 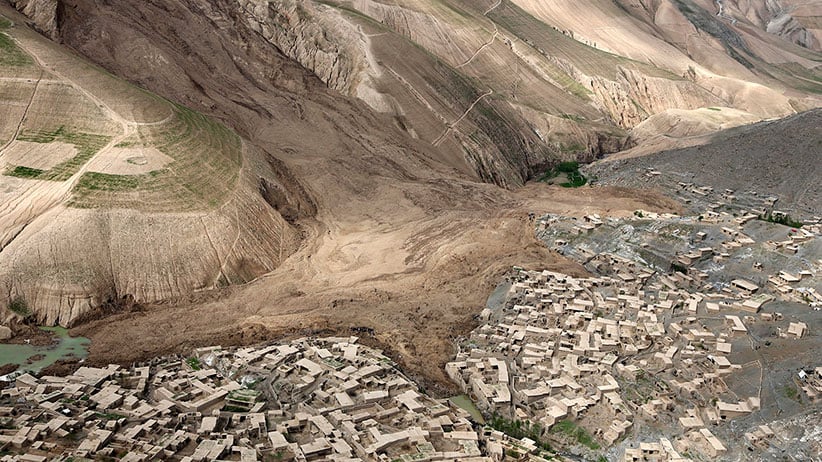 An aerial view shows the site of Friday’s landslide that buried Abi Barik village in Badakhshan province, northeastern Afghanistan, Monday, May 5, 2014. Hundreds of people were killed in a horrific landslide and authorities are trying to help the 700 families displaced by the torrent of mud that swept through their village. The families left their homes due to the threat of more landslides, Minister for Rural Rehabilitation Wais Ahmad Barmak said. (Rahmat Gul/AP/CP)

Rick O’Genski is a scrap metal dealer and inventor in Trail, B.C.

“It was a Saturday morning in June 2012. It was drizzling, and there was on-and-off rain all night. A friend of mine was here; he camps out once in a while in his motor home, and we have a bonfire and kick back and relax and have a few beers. He was getting ready to go, and all of a sudden the rain started coming down pretty hard. It was just black—you couldn’t see 10 feet in front of you. It was just a blur. I’ve never seen it like that in my life.

My property’s a couple miles outside town. Above my place is a road used for maintenance of the power lines and cutting trees. The rain usually takes the path of the power-line road; when we get a heavy rain, it pours down the road and bypasses my property. But this time there was a washout, which dammed that road with a rockslide. It diverted the water right into my backyard.

We stood and watched the rain, and then I heard something out back. I ran and opened the door, and water started coming in. An eight-foot-wide creek that wasn’t there before was now in my backyard. I couldn’t get the door shut.

It came right through the shop, and it pretty much filled the shop with muck. The water was totally brown. It was ankle-deep at that point, but then it got bigger and bigger. It was probably a foot deep at the highest level. Then lightning hit and took out the power and the phones. It was pretty scary.

Today, you wouldn’t be able to tell. It kind of coated my property in three or four inches of silt—dusty, ugly stuff. My friend was here with his pressure washer the next day and we washed it, but there’s still the risk of mould, so I’m trying to keep my eye on things. It flooded out my water system for a bit, but I’ve got that back. Had it been a really nice house, there would have probably been $20,000 worth of damage—that’s the good part. I can still see the vegetation where it’s flattened, where the water came down.”

—as told to Kate Lunau