‘It hurts tremendously. Imagine being sandblasted.’ 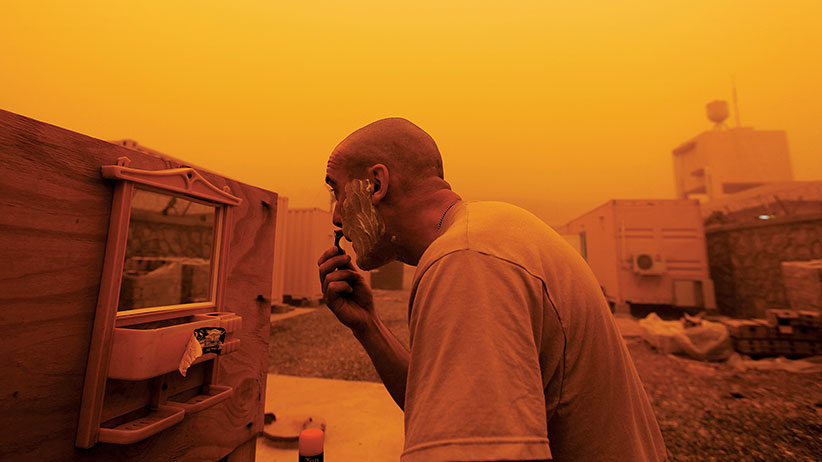 U.S. Army Cpt. Patrick Heim from Bonn, Germany with 2nd Battalion, 508th Parachute Infantry Regiment shaves during a sand storm in his base in Arghandab valley, near Kandahar, in southern Afghanistan, May 5, 2010. U.S. forces are massing on the outskirts of Kandahar for the biggest military offensive of the nearly nine-year-old war, in the hope of turning the tide against a strengthening Taliban insurgency. REUTERS/Yannis Behrakis

George Kourounis is a Toronto-based storm chaser, adventurer and filmmaker, who arrived in Timbuktu in 2009 just as a giant sandstorm swept over the horizon.

“Timbuktu, most people don’t even realize it’s a real place. All the structures are made of mud, and it sits right on the edge of the desert. And just as we pulled into town, this wall of sand started approaching from the north. You couldn’t miss it. It looked like a spaceship, or an army coming over the horizon.

The wind really started picking up and you could hear the sand hitting windows and blowing the branches around. There were camels grunting and running for shelter. They all huddled together and put their backs to the wind.

The closer the storm got, the darker and more ominous it became, until we were finally enveloped. The sun took on the most bizarre colour, kind of reddish, and everything around us took on this orange hue. It didn’t seem real. Visibility dropped down to near zero, which is what makes sandstorms so treacherous, especially if you are out on the road. If there was a car stopped in front of you, you wouldn’t know until you were right on top of it.

READ: Canada’s not ready for a future of massive storms

We pulled into a grungy hotel on the north side of town. I took shelter on the lee side of a building so I could observe this thing overtaking the entire town. I was squinting, but the sand was still getting in my eyes—and since I wear contacts, it was 10 times worse. It’s everywhere, in your hair and clothes—you’re picking sand out of every nook and cranny for about a day afterwards. It doesn’t matter what you do, it gets everywhere. And it hurts tremendously. Imagine being sandblasted. It’s like someone took an industrial sandblaster and held it up against your skin.

It lasted a couple of hours, but the worst of it is the beginning, right at the leading edge. What happens is that you get these thunderstorms way out in the desert and you get these downdrafts that come out at very high speeds—sometimes more than 100 km/h. And it shoots up these massive plumes of dirt and dust, well, well ahead of the rain. So it can be completely dry where you are. It’s a dry thunderstorm, basically.

Eventually it just fades away. It’s not the kind of thing that ends suddenly.

The next morning it was beautiful. A bright, sunshiny day. People were clearing the dirt and dust off everything—the camels and the cars. For the locals, it’s just business as usual.”

—as told to Jonathon Gatehouse