'This is like a living thing': How it feels to escape a wildfire

‘It’s absolutely beautiful and absolutely terrifying at the same time’ 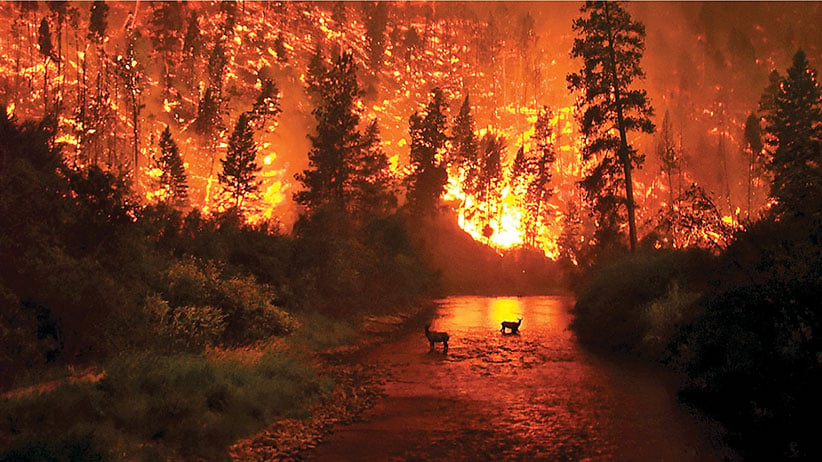 John McColgan, a BLM firefighter, took photos on August 6th, 2000 while fighting fires in the Bitterroot Valley of Montana. McColgan says he “just happened to be in the right place at the right time” with his Kodak DC280 digital camera. McColgan could not be found for days after the one of those pictures spread like wildfire on the Internet.

Author Gail Anderson-Dargatz has been on evacuation alert for three forest fires in the B.C. interior—as a child in 1974, then helping her parents evacuate from the 1998 Salmon Arm fire, and again as a parent in 2009.

“It was the funniest thing. I remember the birds. It was in the night, when you never even hear birds. Flocks of them were screeching through the night, escaping the fire. It was the eeriest thing.

I remember standing outside at 2 o’clock in the morning and looking up at the hills, watching that fire creep step-by-step up the mountain and thinking: ‘Oh my God, this is like a living thing.’ It’s like an entity. It was absolutely beautiful to watch and absolutely terrifying at the same time. It was so close that I could see the reflection of that fire in the pools of water at my feet. It hit every sense. Our lungs were filled with smoke and we were coughing constantly. There were utterly awe-inspiring visions of these huge clouds of smoke. I remember looking up at the sun and it was blood orange. Our emotions were just on hyper alert. All of us were in crisis mode and doing really stupid things. I think it’s that panic that takes over your mind. You stop really thinking and you just react and you just throw whatever is at hand and maybe whatever is familiar into the back of the car. It becomes those items: you can replace a fry pan, but it’s that fry pan that you’ve had for a decade that you take.

READ: See Fort McMurray in photos then and now

Somehow after the evacuation, I ended up downtown. There was absolutely no one in town. It had the feeling of a war zone. Those huge Martin Mars planes, so huge they just seemed to hover in the air. They were going down and collecting water in the lake. All the money was gone out of the bank machines. They were all empty. Every single one of them. The only place that was busy was the Tim Hortons and it was busy because it was just packed full of firemen, all in their gear. I thought, ‘There is a Canadian image if I ever saw one.’

Going through a fire really is a life-changing event. It did make me learn to live much more lightly than I had before. I sound a little like a Hallmark card, but packing what’s important into one car, you figure out what’s important real fast. And it’s really not very much at all.”

—as told to Tamsin McMahon