Drawn by the promise of adventure, he became a paratrooper who took part in the invasion of Italy 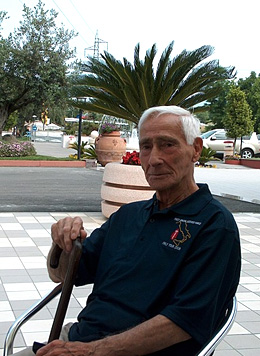 Eugene Arthur Forward was born on Nov. 23, 1920, in Montreal, the ninth of 10 children to factory labourer Hugh Forward and his homemaker wife, Helen. The family lived a modest existence in south Montreal until Eugene was nine years old. That year, his father died and the family fell on hard times. In the midst of the Great Depression, Eugene quit school in the sixth grade, and began delivering groceries for two dollars a week, at age 11. Later, he worked as a carpenter’s assistant and finally, as an apprentice tool-and-die maker with the Marconi Co.

When Canada entered the Second World War, Eugene, like thousands of young Canadian men, was drawn by the promise of adventure and a bigger paycheque. He signed up with the Victoria Rifles of Canada in August 1940. In 1942, his life would change forever when he volunteered to join an elite, joint Canada-U.S. force of paratroopers. In Helena, Mont., the unit became known as the First Special Service Force, and trained in parachuting, mountain warfare and sabotage.

In 1943, the FSSF was sent to Italy, where the Allied invasion had bogged down in the mountains south of Rome. The Nazis were dug into fortified positions atop the mountains and were shredding Allied forces trying to advance up the valley below. The FSSF’s job was to climb the mountains and defeat the Germans dug in on top. The first such mission came on the night of Dec. 3, 1943, on the towering ridge of Monte La Defensa. The troops climbed the sheer cliffs silently, in darkness and a cold drizzle. At daybreak, they attacked and won the summit, but 82 men were killed, and hundreds were wounded. In the weeks ahead, the FSSF helped drive German infantry from one hill after another through the winter of 1943-44.

In January, Eugene was one of five men sent ahead to “locate the enemy” on Monte Majo. “When somebody started shooting at you, you knew you’d located the enemy,” Eugene explained to friends earlier this year. Near the top, Eugene suddenly found himself in a storm of machine gun fire. Three rounds slammed into his helmet, puncturing the steel. Metal shrapnel cut his forehead badly, but none of the bullets penetrated. Over the coming months, Eugene would survive being shot twice more—once in the back and once in the throat. But dozens of his close friends were not so lucky.

He was discharged from the army in May 1945, but life after the war was difficult. Back on the shop floor at Marconi, Eugene found the monotony and the pounding din of the machines impossible to take. He quit his job, and sank deeper into despair and drink. It was Margaret Hogg who pulled him out of it. “I had known her since school days and always liked her very, very much,” Eugene once recalled. They married in 1946. Eugene was working as a construction worker and there wasn’t much money. The two lived in a tiny cottage that hadn’t been winterized. Eugene carried scrap wood home each night for heat. At one point, he became so desperate he hatched a plan to rob banks. Margaret put a stop to the idea, telling him she wouldn’t sharea home with a thief. Eugene never mentioned it again.

Within a year of the wedding they welcomed their first child, Bruce. Their daughter Maureen was born the following year. She was severely mentally handicapped, but they were determined to make her a full part of the family. Bruce still remembers the joy in his parents’ eyes when Maureen took a few steps at the age of five. Eugene was a loving but tough father. He had finally built a home and a career, becoming a skilled builder and handyman, but he was haunted. He could never discuss the war. “For years I couldn’t even look at a war movie without crying like a baby,” he told friends.

In 1979, Eugene and Margaret, both heavy smokers, agreed to quit together. A month after smoking her last, Margaret was diagnosed with lung cancer and died within the year. Maureen had passed away a few years earlier, and Eugene found himself alone and depressed. He drank more, but only found real solace when he reached out to old friends from the FSSF, and began travelling to reunions and memorials. Slowly, Eugene found the ability to talk about those years, and the friends he lost.

In May, a group of 35 children and grandchildren of FSSF vets returned to the hills south of Rome to pay their respects to those who didn’t return, and Eugene was the lone veteran to make the trip. He returned to the foot of Defensa, and Majo and Sammucro—the places where he’d nearly been killed and lost so many friends—and told stories of the war. He confessed that he wasn’t feeling well, but he was glad he’d gone, to see what peace had done for the hell he left behind. Soon after returning home, he was diagnosed with liver cancer and kidney failure. “I’m not afraid to die,” he told the doctors. On Nov. 8, 2008, Eugene Forward passed away in hospital, two weeks shy of his 88th birthday.