Born deaf, he lived a simple life; but the bicycles he fixed up allowed him to roam the community. 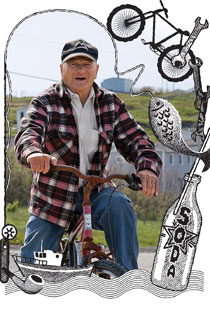 Ezekiel Martin was born in Grates Cove, Nfld., on Oct. 21, 1933, the son of Henry, a Methodist preacher, and Bertha, a homemaker. He was born deaf. Ezekiel, who came to be known as Zekel or Zeke by everyone he knew, moved with his family to Lower Island Cove, about 30 minutes to the south. He returned to Grates Cove, a tiny community of 100, in the mid ’70s. All told, he spent his whole life a couple of hours northwest of St. John’s. His niece, Christine, described Ezekiel as a kind, gentle man with a childlike appreciation of life. “He wasn’t really like a grown-up,” she says. Ezekiel’s nephew, Tony, says he saw his uncle upset just a single time, when someone stole his bike.

Bicycles were, from a very young age, a constant source of joy for Ezekiel. “They were freedom to him,” says a neighbour, Cal Martin, no relation, who knew Ezekiel most of his life. That joy extended from cruising around town to fixing—and modifying—every bike he owned. Cal recalls one instance when his friend blew a tire outside of town. With no pump in sight, the resourceful Newfoundlander decided to tear the tubes out of his tires and fill the empty space with straw. He made it home. Tony always thought that was a tall tale, but Cal insists it’s a true story.

Ezekiel lived a remarkably simple life. He completed the eighth grade and lent a hand to his brother, Tom, with whom he later lived for almost 40 years, in a fishing business. He was an able fisherman, whether in the ocean or while “trouting” on inland ponds. In time he settled into a routine that saw him get on his bike each day and visit a different house around town. He read lips to get by. But that was no impediment, Christine says. Everyone’s door was open, and they’d serve him a cup of tea and biscuits. When he wasn’t visiting friends, Ezekiel would be down at the corner store buying candy and soda—he loved the fizzy stuff, and always had a bottle of soda and a bottle of water on his bike. Christine says even as he grew old, he always treasured Christmas, when the family would give him “lots of candy and lots of socks,” and have him open his gifts on Christmas Eve with everyone watching (Ezekiel loved the spotlight and loved to be on camera, says his niece).

A few years ago, Ezekiel came home complaining of chest pain that extended into his arms. Immediately, he was taken to hospital in St. John’s, where he underwent open-heart surgery. It was his first visit to a hospital, and by all accounts a terrifying experience. Before the procedure, Tony says, Ezekiel “cried and cried,” and thought “the end was near” when a minister dressed in black robes visited the room. Of course it wasn’t, and the surgery was successful. But Ezekiel remained confused, unsure what had happened or why. “He couldn’t understand why he was all cut up,” says Christine. He spent weeks cooped up indoors while his body healed, feeling down because he couldn’t be outside and roaming around on two wheels. After a couple of months, however, he was back to his daily routine, visiting neighbours, drinking tea and eating biscuits.

Tony says his uncle, even in his advanced years, constantly made trips to the dump to gather spare parts for his red cruiser bike. He was always modifying it, figuring out what worked, discarding what didn’t. “There’s a bucket of parts here now right in front of me,” says his nephew, describing a jumble of brakes and cables at his feet. Ezekiel’s handiness extended beyond bikes. He was also a smoker—even rolled his own cigarettes—and used to fashion homemade pipes out of birch from nearby forests. “He could’ve sold hundreds of them,” says Tony. “You wouldn’t believe it was handmade.”

As time wore on, Ezekiel found himself, as Cal put it, “part of the landscape in Grates Cove.” Everyone kept an eye out for his bike around town. “Around here, there were two things you were told to watch for on the road,” says Cal. “Watch for moose, and watch for Ezekiel on his bike.” Drivers would cross to the opposite shoulder to avoid him. On Sept. 24, Ezekiel was out for an afternoon ride on Route 70, just outside of town, enjoying a bike given to him by a friend—not his own, trusty bike that he’d modified so carefully with those spare parts. Some time after 3:30 p.m., in what police called “an unfortunate accident,” a mail delivery truck struck and killed him. He was 78.