Social-media network changes status update to in the wake of a petition that racked up more than 16,000 signatures 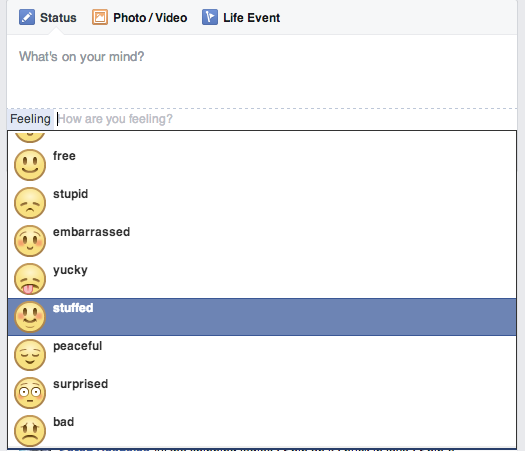 “Feeling fat”? You aren’t, really—and that’s the problem a group called Endangered Bodies has noted about Facebook’s emoji. Under options such as “feeling excited” or “feeling stressed,” with cutesy smiley faces reflecting those emotions, there is, perhaps inexplicably, “feeling fat”—a dangerous sentiment for those with body issues and eating disorders.

Leave aside the fact that Facebook’s emojis have proven to be as useless and trend-following as its ignoble hashtag; this is precisely how normalization happens, especially for a new generation of young people who aren’t so much digitally inclined as they are digital in their very bones. But whereas the creation of racially diverse emoji for Apple products misses the mark—and, in their specificity, manage to exclude just as much as they attempt to include—a “feeling fat” option is a targeted insult that reflects the worst of who we are and the language we use daily, both online and verbal.

Fat, of course, is not a feeling. “Fat is a natural part of our bodies, no matter their weight, and all bodies deserve to be respected and cared for,” wrote Catherine Weingarten, whose petition has accumulated more than 16,000 signatures in just a few days. But that doesn’t change the fact that “feeling fat” has been co-opted into our common tongue—the clearest proof being, perhaps, was the word Facebook quietly changed it to after the criticism: “stuffed.” Stuffed is a feeling; you have eaten too much. Fat is no more meaningful an emotion than “feeling Asian” would be. But Facebook was merely caught reflecting our greater society.

Look no further for proof of the pervasiveness of “I feel fat” than a Twitter search of the phrase before this fracas blew up, on March 6. “Eating cinnamon rolls right now and I feel fat,” tweets one; “My pen exploded and got ink everywhere at work and I feel fat/I can’t stop eating. Could today get worse,” asked another; “OMG. I feel so fat. Ate all of my delicious dinner. Food coma,” wrote another tweeter.

Thing is, these aren’t admissions or promises to eat less next time. These are what constitute a modern cry for attention. “I feel fat,” we announce, because, deep down, we know we are not really; “I feel fat,” we say, because those with genuine self-image problems or eating disorders wouldn’t be so flip. Indeed, one of the aforementioned comments was attached to a photo of someone in workout clothes with an extremely lean, exercise-toned body—but that no longer matters these days. And yet we say it anyway.

So kudos to Facebook for changing the emoji option to an actual thing—the understandable feeling of having eaten too much food. But Facebook’s crime wasn’t necessarily having the emoji available. Its crime was so accurately reflecting society’s understanding of fat. One hopes the guilt stays longer than simply clicking “like” and moving on.