Fear and loathing at Cosby trial gets worse by the hour

Bill Cosby's deadlocked jurors are surely getting on each others' nerves. But the tension outside the jury room might just be worse. 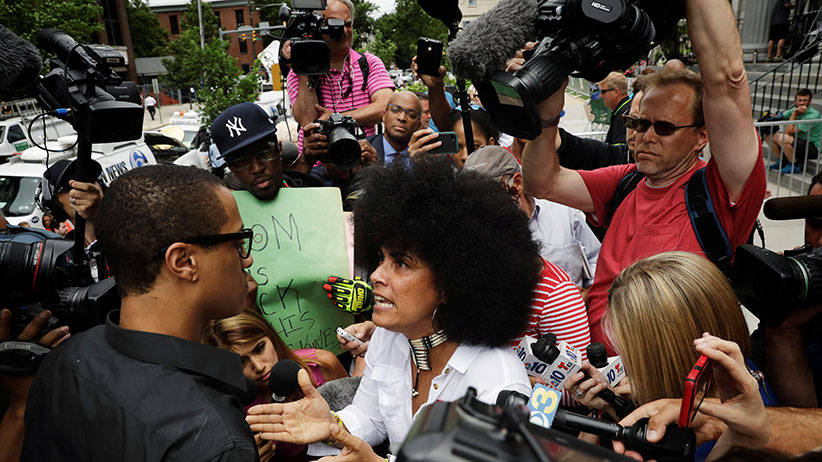 On Friday morning, media coverage of the Cosby trial clashed with judicial process, causing Judge Steven O’Neill to vent frustration in court. Before jurors returned for the answer to their latest questions (“We would like to hear the sealed testimony of Bill Cosby that was opened?”; and “What is ‘reasonable doubt,’ the definition?”), the judge questioned Cosby under oath.

The judge’s concern stemmed from remarks made by Cosby publicist Andrew Wyatt during a tension-filled day following the jury’s Thursday morning announcement they were deadlocked—and the judge sending them back to deliberate. Wyatt has been front and centre throughout the trial. Cosby holds onto his arm walking into the court. He sits at the defence table. A genial man, Wyatt has provided many headlines—such as the prospect of Cosby testifying—that in hindsight did not pan out.

Immediately after the deadlock announcement, Wyatt told media that his client was “pleased” and “vindicated,” as if the trial were over. At 8:15 p.m. last night, with jurors still deliberating, he called for a mistrial. “We’re into the 40th hour, and we can only imagine the emotional and physical toll this is taking on the jurors,” he told the media throng. “We can only hope the judge—if they don’t have a verdict right now—will release them, and say this is a deadlock.”

In court on Friday morning, Judge O’Neill addressed Cosby: “You have a source person out in the media explaining what [mistrial] means.” He noted Cosby’s lead defence lawyer, Brian McMonagle, repeatedly has called for a mistrial. The judge asked Cosby if the decision to publicly demand a mistrial “is yours and yours alone”, and if he knew it has “important consequences.” In a booming voice, Cosby answered, “Yes.”

Judge O’Neill continued: “I need to know if you consent based on manifest necessity that if a mistrial is named, you cannot revert to raise double jeopardy,” meaning that Cosby would have to sit through a second trial if the district attorney called for one.

The jury has deliberated for a long time, Judge O’Neill said: “I will let them deliberate as long as they want to deliberate,” before bringing the jury in. The sections of the Cosby 2005-2006 deposition they requested involved Cosby’s testimony that he gave Quaaludes to young women he wanted to have sex with in the ’70s. The jury heard the entertainer say he told the women what they were taking, but he never took the prescription drug—then illegal to dispense unless by a doctor—himself. They made him “feel sleepy and he liked to feel awake.” He described the effect as “someone who is high” and that one woman he gave them to “walked as if she was drunk.” He had the prescription filled seven times, he said; he testified that “one could keep them a number of years” but that he had none in his possession in 2002. The jurors were sent back to deliberate.

Friction between activity outside court and inside it on Friday continued the tension that erupted a day earlier in the wake of the announcement of a deadlocked jury. The polarities of opinion evidently occurring within the jury room were manifest outside the courthouse in ugly confrontations between Cosby’s supporters and his critics. Police barricades had to be erected.

As a woman holding a “Perseverance for all Survivors” sign marched down a street aside the court trailed by two men in face masks and banging drums, Cosby accuser Lili Bernard got into an emotional confrontation with Cosby supporters chanting “Free Bill!” and holding “Free Bill Cosby” signs. “God Bless You,” she told them. To another man she said, in a voice hoarse with emotion: “I experienced it firsthand when he drugged me, he raped me, he threatened me to silence,” adding, “I came home to my boyfriend at the time—who has been my husband, my one and only since 1990—I came home drugged and sexually assaulted by Bill Cosby to him.” The stand-off reduced Bernard to tears, and she was led away by another Cosby accuser.

Garvie B, who’d driven in from Philly, stood in front of the court holding two signs: “Free Mr. Cosby” (Cosby is not in jail) and “Let Mr. Cosby go so he can go home and watch Uptown Saturday Night,” a reference to a 1974 Cosby movie. He said he’d confronted Bernard: “I asked her, why didn’t she get a rape kit done when it happened?” Waiting decades to report was suspect, he said. Cosby had his sympathy: “The man is almost 80 years old—he only sees with one eye—and now you have this trial.” The trial was a money drain, he said. “It could be used to fix the Philly school system. It could be used for so much righteousness.” He heard the allegations via the Hannibal Buress viral video in 2014. “I thought it was a joke. But comedy turned to calamity.” Jury deadlock means most of the jurors find Cosby not guilty, he said. “From everything I’ve heard of the trial he’s innocent,” he said.

There were other glimpses of attempts at bridge-building. Jewel Allison, who alleges Cosby spiked her wine and assaulted her at his Philadelphia home in the late-80s, engaged with 27-year-old Zakia Tuck, who held up a sign reading “Mr. Cosby is Innocent! Facts!” TV reporters descended and shoved mics in their faces. Allison in the past has suggested Cosby may be “America’s greatest serial rapist that ever got away with this for the longest period of time.”

The trial has been an empowering experience, she told Maclean’s, making her stronger than she was before. It served as an equalizer, she said, speaking of Cosby: “Do you see a rich man? Do you see Fat Albert? Do you see Dr. Huxtable? You see a man, that’s all.” The verdict is “in God’s hands,” she added.

Tuck came from Philadelphia “in support of Cosby and in support of the truth.” Allison asked if she had been in court. “No,” Tuck answered. “You need to hear the testimony,” Allison said. Tuck, who like Allison is African-American, was focused on wider symbolism. “It’s more than a man on trial,” she said. “It’s so many “isms”—ageism, sexism racism … It’s a mirror being held up so we can look at ourselves.”

She too questioned why women came forward against Cosby only decades later. “Why now, why not years ago when this was supposed to be happening?” she asked. “He’s old now, she said, quickly adding “not that that means whether he should be held accountable.” As she saw it, there was only one truth. “Only those involved know.” When it’s pointed out the sexual assault trial, by definition, features two versions of truth, she just shook her head.

By nightfall, the scene featured prominent duelling spokespeople. Gloria Allred, the high-profile L.A.-based lawyer who is representing more than 30 of Cosby’s accusers, threw an impromptu press conference behind the same podium Wyatt had used. Allred, who is representing more than 30 women who accuse Cosby of sexual assault, tried to school Wyatt, saying that he needed to honour judicial due process. The jury should be able to take as much time as they need, she said. It was a rare moment when events outside the court squared with the judge’s rulings within.