The search for the opioid is as dangerous to the police dog as it is to its human handler. It’s high-risk duty. 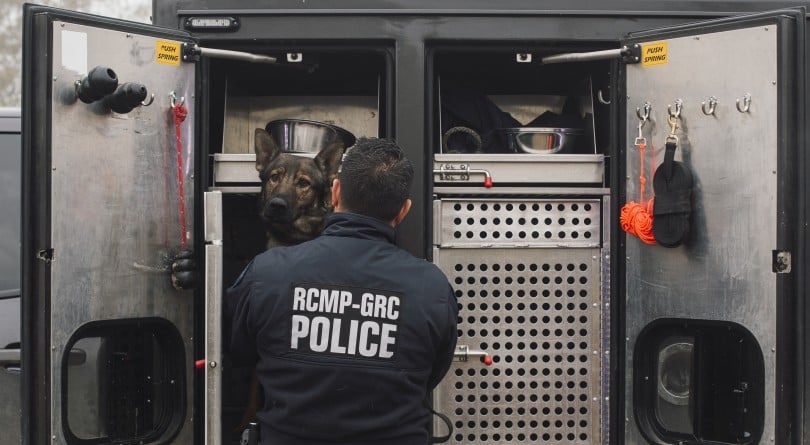 Cst. Dave Ling puts his dog Janga back in his kennel at the RCMP Police Dog Service Training Centre in Innisfail, Alberta. (Photograph by Amber Bracken)

Kelly already knows she’s found something. She’s in a garage near Innisfail, Alta., on the grounds of the RCMP’s police dog training headquarters. It’s an early fall morning, and the thick fog outside gives the place the feel of a clandestine facility. Kelly sniffs and searches along a white wall dotted with black holes, each connected to a tube and a container containing an odour. It’s a small training space that looks like a misshapen hockey rink. She’s guided on a short leash by her handler, who encourages her in the high-pitched voice many people use when speaking to their pets.

Kelly is a dark German shepherd, about a year old, and two weeks into her training. Her inexperience shows in her excited demeanour, but she’s performing a job only a dog could. She inspects a few holes meant to trick her nose before pausing near the next one. Then, suddenly, she sits to signal she’s discovered what she’s looking for. Fentanyl. “Look at the focus in her eyes,” an officer says, leaning over the wall. A dog toy shoots out of the tube seconds later, ushering cheers of “Atta girl!” and “That’s a good girl!” Belly rubs and hugs come with the celebration.

Kelly and her fellow canine officers are learning how to detect fentanyl, a deadly narcotic that has taken thousands of lives and is considered the driver of the country’s opioid crisis. In 2017, more than 1,400 people died of drug overdoses in B.C.; about 80 per cent of those deaths involved fentanyl. Ontario had more than 1,100 opioid-related deaths. Across the country, nearly 4,000 Canadians died from opioids in 2017, a quarter more than the year before. Earlier this year, Theresa Tam, Canada’s chief public health officer, said the country needs to find ways to “reverse the trend of this crisis.”

Cutting off the flow of trafficked opioids and removing them from the streets of cities and small towns is one part of the war on these drugs. And police dogs are increasingly on the front lines. In 2017, the RCMP began training all its narcotic dogs—there are about 120 across the country—to sniff out fentanyl, a program that has police forces around the world showing up in Innisfail. “They’re the best tool. There probably isn’t a better tool apart from the man [in uniform],” says Gary Creed, the RCMP’s senior trainer. “Dogs are able to find trace amounts, they’re able to find large amounts, they can search vehicles in minutes. They’re invaluable.” 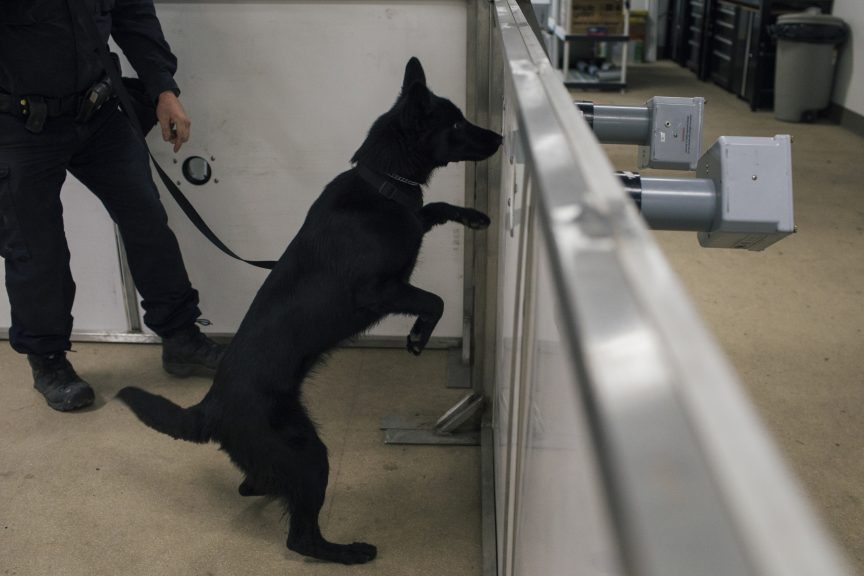 But their value is linked to the risks they face, as the search for fentanyl is as dangerous to the animal as it is to its human handler—more so when the dog is closer to the substance. Four granules, or about two milligrams, of pure product is enough to kill a person, and it’s about 100 times more powerful than morphine. Two years ago, three Florida police dogs overdosed after a drug raid in Broward County because the powdered substance was scattered throughout the suspect’s house. With their tongues lolling out, the animals began staring off in the distance and stopped drinking water before worried officers rushed them to an animal hospital (they were successfully treated).

Creed says that dogs seem a little bit better than humans at withstanding its effects. “But more people were dying,” he says, adding that the detection program “started out of a need.” The idea came to him a little more than two years ago, when he was recovering from surgery, passing the time thinking of better ways to cut off illegal opioids. Unlike many narcotics, fentanyl didn’t have a so-called “pseudo odour,” that is, a commercially manufactured scent that is safe for K-9 training. Creed had been getting calls from officers and former dog handlers working in the private sector, asking whether the pups his facility breeds had fentanyl in their odour palettes as they do other drugs.

But the fentanyl that the RCMP removes from the street is often powder, the potency of which makes it too dangerous for both officers and dogs in training situations. So Creed sought out the Mounties’ drug lab, which manipulated the powdered opioid into a liquid solution that is safer. In 2016, they began trials to make sure the dogs weren’t confused, sniffing out, say, the water or makeup dabbing pads used to carry the liquefied fentanyl’s scent. They eventually ran a real test using the drug’s loose form—paramedics and veterinarians watched closely—and each police dog was able to find it without inhaling enough to cause it harm. Out in the field, officers who patrol with canine companions carry an antidote, a naloxone nasal spray, to treat the effects of opioids in deadly scenarios. “We have not had a dog exposed to fentanyl yet,” Creed says. “Why? Just lucky. That’s just being blunt about it.”

Creed admits that he grew up afraid of dogs. He was attacked by a Doberman when he was four, and only after he joined the Mounties did his phobia fall away. During training, he found being chased around while wearing a protective “bite sleeve” fun. Working with dogs proved to be the place on the force where he fit in.

Police dogs typically live at home with their handlers and their families, in some cases retiring with them. Officers “spend more time with their dogs than they do with their families,” notes Creed. But the RCMP’s training methods and deployment of canines has its critics. Douglas King, a lawyer formerly with B.C.’s Pivot Legal Society who has studied the uses of police dogs, disputes the idea that the animals are equal partners in the relationship. “They’re being trained to be used as a tool,” he says, “and that tool is being used to minimize the risk of police officers.” The Alberta Society for the Prevention of Cruelty to Animals is less concerned, saying in a statement that the dogs “have an important role to play in law enforcement and in keeping our society safe.”

RELATED: These are the provinces where the opioid crisis is growing fastest

Creed insists that the dogs are treated well “all the time,” and that the Mounties are simply “exploiting their natural instincts of hunting.” Cpl. Clayton Catellier, Kelly’s new handler, says he won’t deploy his canine partner at a scene if a substance he suspects is fentanyl is plainly visible. “There’s a lot invested in these dogs,” he says, “and it’s our job to make sure they’re safe.” Adds Creed: “Yes, they face a lot of danger in their jobs—that’s why we have them. Our philosophy is that we won’t unnecessarily expose our dogs. We won’t send a dog to its death just because. Would we? Yes. If it meant saving somebody’s life.”

So far, the new training regime has proven successful in the field, where dogs have found thousands of fentanyl pills headed for Canada’s towns and cities. The first major seizures took place mere weeks after the first dogs graduated. Two were made by Catellier and his recently retired partner, Doodz (named after Creed’s daughter, who goes by the nickname Doodz)—the first was a bust of 12,000 fentanyl tablets along the Trans-Canada Highway between Chilliwack and Hope, B.C.; the batch was destined for Alberta.

Then, along the same stretch of highway in April 2017, Catellier and Doodz made a much bigger seizure after pulling over a man driving a brown, old-style van for speeding. Without specifying the clues he saw, Catellier says he formed a “reasonable suspicion” there were drugs in the vehicle, which led him to “run a dog around” the outside of the van. Doodz sniffed around cautiously, her behaviour adjusting slightly, giving off discreet signs that let Catellier know she may have found something. Once Doodz was certain, she gave her final alert: a simple sit.

Catellier didn’t know what kind of drug was in there, but in his view, it gave him grounds to search the van. Yet after a thorough first inspection, he found nothing. Still, he refused to believe that his partner somehow got it wrong. “I was confident in my dog,” he says. Catellier took the vehicle to a garage in Chilliwack. He had all the tires removed. He found bonding glue in the back of the van, a sign that someone may have pulled apart some panels or carpet. He began stripping the interior, manoeuvring his arm down the walls. “I stuck my hand as far as I could down the wheel well and started pulling out bag after bag—large Ziplocs full of fentanyl pills,” he says. The total count: more than 27,000.

The next move for Creed is to determine how many fentanyl analogues—that is, drugs with a similar chemical makeup—police dogs can trace. Though hundreds of analogues exist, he estimates that there are currently about 14 circulating in Canada. Already, police know that their canine companions can detect carfentanil, an even stronger opioid often used to tranquilize big game like elk and elephants.

Doodz was nearly seven years old before she was forced into early retirement by cannabis legalization—detecting pot had been her bread and butter. She was one of more than a dozen to be put out of a job: police couldn’t have them “alerting” on people carrying a legal substance, after all. “I mean, I understand,” Catellier says ruefully, though he figured Doodz had a couple more years left. Meanwhile, at the training centre near Innisfail, Kelly is noticeably more attentive since being paired with her new partner; it’s a time, says Catellier, when “you can see that special bond forming.” In this regard, she’s picking up where Doodz left off. But she’s doing so in partially charted territory, setting her sights on drugs more lethal to humans and dogs, purveyed by people more cynical about its dangers.