Polars bears are descending on Newfoundland and scaring parents

Parents are schooling kids in the risks posed by ursine visitors. Good idea, because the bears may soon be arriving in greater numbers. 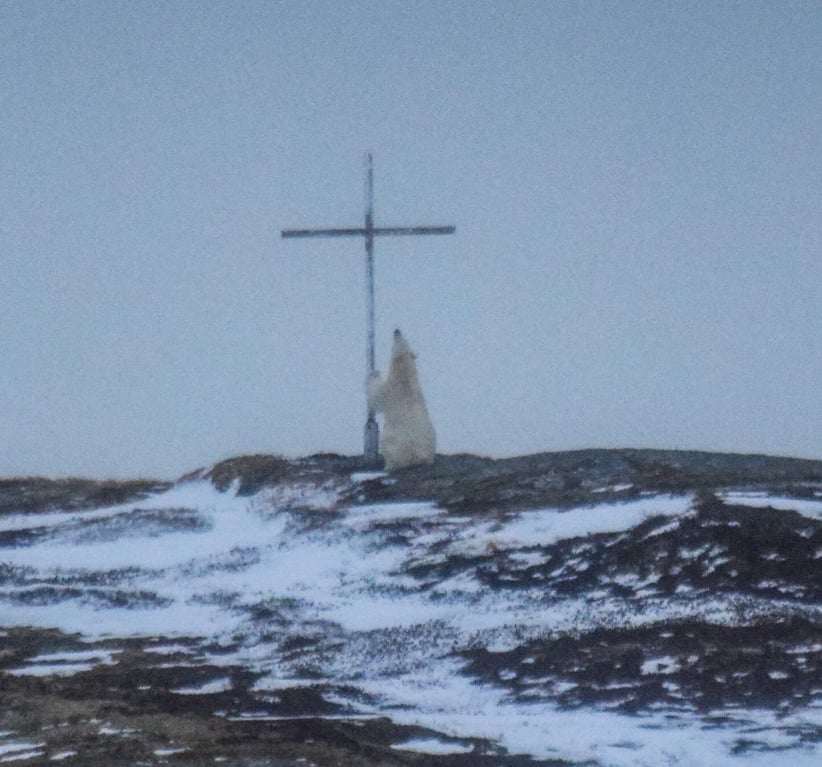 Laura Keefe wouldn’t choose to be a helicopter parent. In the Labrador village of Black Tickle, she wishes she could let her children go tobogganing, snowshoeing or walk home from school at lunch. She’d like to allow her 15-year-old daughter to wander to a friend’s house up the road, and when her youngest kids, 6 and 11, play in the backyard, Keefe would rather not stand guard on the porch. “But with polar bears around,” she says, “we just don’t feel safe.”

Each spring, polar bears search for food in towns in southern Labrador and cross ice floes to the island of Newfoundland, venturing as far south as Wesleyville, 125kms north of St. John’s. Residents are documenting the sightings with cameras, lighting up social media with photos of a bear ripping a seat off a snowmobile, another inspecting a cross near a church, and another swinging in a net beneath a helicopter as it was airlifted off an island. Although parents in rural Newfoundland and Labrador like to let their children roam free, not fearing the typical crimes that happen in cities, for a period each spring, they must raise them in the face of a stranger danger.

“[The bears] will come to your window with their paws up against your window, watching you cook,” says Keefe, describing an incident last year. “That’s traumatizing.” Polar bears haven’t hurt children in Labrador—the most recent attack in the province was in 2013, when a bear pulled a seasoned hiker from his tent in the Torngat Mountains. But Black Tickle, located on Labrador’s southeast coast, has recorded more than 20 sightings this year, and other parents are being even more protective. Crystal Dyson has a 13-year-old son, Nolan, who has autism. Nolan has done a polar bear safety course, and when the town needs to scare away a bear using noisy vehicles, Dyson personally gets on her snowmobile. “I chase them down with Canadian Rangers to drive them out of the community,” she says.

Even if polar bears aren’t injuring kids, they are a bad influence. They can draw young people on Ski-Doos to follow them out onto the ice. Tim Rumbolt, owner of Cloud 9 Boat Charters and Tours in St. Mary’s, Nfld., explains, “parents are fighting to death to keep their kids from going out on the ice for an adventure.”

Social scientists find that rural parents don’t tend to monitor their children like urban parents do. However, Catherine Ratelle, a professor at Laval University who holds the Canadian Research Chair on parenting, notes that rural parents can become hyper protective due to “punctual events.” And such events can include the arrival of Arctic predators.

“I tell kids to go home,” says Jeffrey Keefe, leader of the Canadian Rangers in Black Tickle. “A lot of them don’t be allowed out.” When kids see him with a rifle, they often follow him on their snowmobiles to watch the action. He recently switched to carrying a small flare: “I can keep it in my pocket so that people don’t know I’m going after a polar bear.”

Since bear sightings in the early winter have been linked to climate change, some parents are more concerned for their future grandchildren. “If this is going to continue, one of the things we’ll have to teach children is to pay attention to news bulletins and things like that, and to avoid conflict with a polar bear,” says Ernest Simms, mayor of St. Anthony’s, Nfld., where a bear was hit by a snow plow last week, while another was spotted near an RV park. Polar bears have always roamed southern Labrador in the spring, but climate change may bring them out earlier in the winter. “I will teach my grandchildren how to move away from [them],” says Simms.

Moving away from a bear isn’t always possible—not for people on small islands. The community of St. Brendan’s, on Cottell Island, not far from Wesleyville, had to call provincial wildlife services to airlift a polar bear back to the mainland. Valerie Broomfield, the mayor, says if they hadn’t removed the bear, “a lot of people would be afraid to go to bed.”

Children aren’t the only ones scared to sleep around the creatures. Keefe, the mother in Black Tickle, admits, “I have nightmares.”