Cosby's remarks about consent were preoccupying the panel, and so were discrepancies in the prosecution's evidence. As the parties waited anxiously, there was no sign of a verdict. 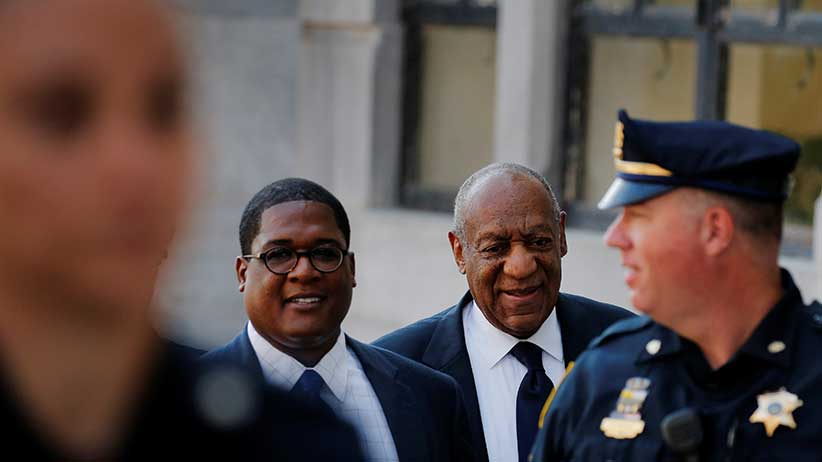 After 16 hours and 30 minutes of deliberations in Commonwealth v. William H. Cosby Jr., the sequestered jury was sent back to its hotel on Tuesday night. But before they’d left, the jurors had asked the court four questions, each of which the assembled reporters and spectators read like tea leaves in an attempt to determine which way the panel was leaning.

Question 1. 7:30 p.m. Monday. Two hours into deliberations, the jury asked for content regarding a comment by Cosby in his sworn depositions made in 2005 and 2006. This was a damning exchange in which Cosby testified he told Andrea Constand the three blue pills he gave her were “friends to help you relax.” That reference would be the centrepiece of District Attorney Kevin Steele’s closing arguments only hours earlier. He’d projected the entire quote onto a large screen: “Your friends, I have three friends for you to make you relax,” it read. “Who says that?” Steele had asked the jury incredulously.

Question 2. 9 a.m Tuesday. The jury asked to hear 13 pages from the Crosby deposition. Judge Steven O’Neill read out passages seen to be damaging to the defence. They included Cosby testifying he wanted have a “romantic” relationship with Constand from the moment he saw her and strategized how to build her trust. In another section, he described his jerry-rigged definition of “consent.” He talked about the “question zone,” the place where he, Cosby, determined whether a woman was consenting—“she didn’t verbally say it, but given a time to say ‘Yes’ or ‘No’ in the question zone.” He talked about how he navigated “consent” with Constand in their first sexual encounter, one Constand denies happened: “I go into the area between permission and rejection and I’m not stopped,” Cosby said. “I’m moving fingers gently. She did not stop me.” He said he touched the skin of her midriff and then moved his hand inside her pants down to an area he called “the orifice.” He took her silence as a ‘Yes,’ ” he said: “I don’t hear her say anything. And I don’t feel her say anything. And so I continue and I go into the area that is somewhere between permission and rejection. I am not stopped.” (Constand denies sexual activity; she testified she rebuffed Cosby when he touched her pants by leaning forward). The jury also heard Cosby say he assumed Constand consented to any sexual activity that night when he touched Constand’s face when she arrived at his house.

In the testimony, Cosby said the encounter was “awkward and uncomfortable” for Constand. Yet he also said she made “a sound I think is orgasm.” Later he describes a strange configuration where he is pleading with her to go to sleep: “I sit between her torso and her thighs. I sit there and ask her to please take a nap, please take a nap.” Later on, Cosby contradicts himself, describing the same encounter: “We go in on a sofa and there’s necking and petting. No stress. Maybe a psychologist would call it stress but there’s no stress. Maybe her orgasm helped a little.” Under questioning from Constand’s lawyer taking the deposition, Cosby said: “No, I didn’t say, ‘Go to sleep.’ Why are you putting words in my mouth?”

Question 3. 11:27 a.m. Tuesday. This question pertained to Count 2, which alleges the sexual assault occurred after Cosby gave Constand an intoxicant without her knowledge that substantially impaired her and stopped her from resisting. The jury wanted the judge to define “without her knowledge.” The judge said he wouldn’t. He told the jurors they had the written charge in their possession. “It is what you have in front of you.”

Question 4. 3:51 p.m. Tuesday. This was a request to hear testimony from detective David Mason of Ontario’s Durham regional police, who took Constand’s initial police report in January 2004. There were inconsistencies between this report and Constand’s later police reports, which the defence used to assail her credibility. On Tuesday, the jury heard the officer say he told Constand he wanted “an initial account” and a “narrative of events.” In the report, Constand alleged the assault occurred in early January after she was out to dinner with Cosby and others. Mason’s testimony indicated Constand reported being given three small blue pills that Cosby told her were herbal pills; Cosby later testified those pills were Benadryl. Some details would be consistent with later police reports—the date, the pills, details of the assault. But there were inconsistencies used by the defence to undermine Constand’s credibility—details of the evening; Constand telling police she’d never been alone with Cosby before. D.A. Steele told the jury they could convict based on Constand’s testimony alone if they found it credible. This reread suggests doubt among jurors on that point.

Inside the courtroom: A smiling Andrea Constand arrived in the courtroom at 9 a.m. for the second question. She hugged assistant D.A. Kristen Fedden and the detectives on the case. She sat next to her mother Gianna, her arm around her shoulder.

Outside the courtroom: Lead defence lawyer Brian McMonagle greeted a woman he knew enthusiastically, telling her that seeing her made him feel happy—joking, “It’s the only thing that makes me happy in this entire nightmare.”