Funeral workers are finally opening up about the job's emotional toll

Digniﬁed stoicism was the manner of operating in the industry, leaving many struggling personally. A group of Ottawa workers is tackling the issue. 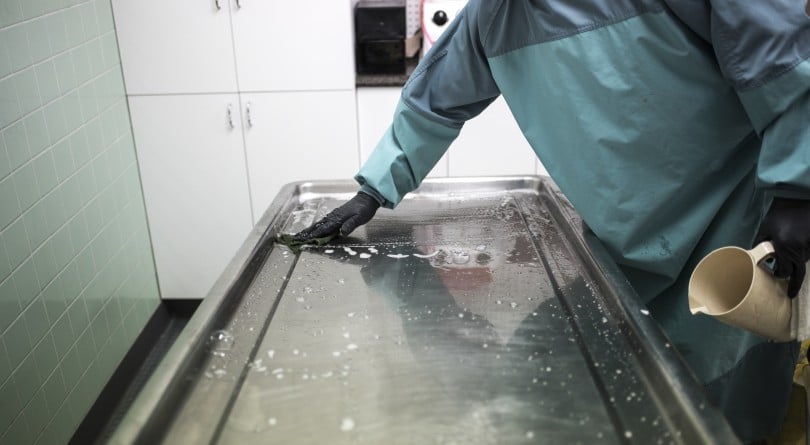 An embalming room in a funeral home in Ontario. (Isaac Paul)

In his extraordinary book The Undertaking: Life Studies From the Dismal Trade, Thomas Lynch—a poet and undertaker from a long familial line of them—writes that “A good funeral gets the dead where they need to go and the living where they need to be.”

Now, a group of Ottawa funeral service workers is tackling an issue that seems starkly obvious: There is an enormous emotional burden on the people who get the dead and the living where they need to be, and who act as repositories for the loss and raw humanity that tend to tear us open and turn us inside out when we are mourning.

In January 2016, Michael Dixon had picked a date and made a plan to end his life. He had even done a practice run. “I woke up, had breakfast, kissed my wife goodbye, drove my son to school and off I went. It was there in the parking lot that I realized I needed help,” he says. Dixon works with Ottawa Mortuary Services, which provides services to funeral homes in the city. That means Dixon helps with funerals as needed, but he also picks up bodies at their place of death, whether that’s at home or in the hospital, at a crime scene or a trafﬁc accident. “A lot of people in the general public are really surprised at that . . . They always thought it was the police or the paramedics or that sort of thing,” he says. “But it’s us.”

READ: Is it time to kill the funeral procession?

The job forced on him a realization of how cruel human beings can be, he says. That, coupled with his own experience of childhood trauma—the details of which he keeps private—led him to that parking lot, where he stopped himself and called his doctor, and was subsequently diagnosed with severe depression and PTSD. “I realized, ‘Oh great, now I can get help,’ ” he says. But it wasn’t so easy: “It took me forever to ﬁnd somebody to help me, because I wasn’t a ﬁrst responder.”

He eventually found a therapist who specializes in PTSD, and she has conceptualized treatment for him as peeling away onion layers of suffering that had built up over years. With her help, Dixon realized he’d spent years self-medicating with alcohol, and he decided to be very open with co-workers about his struggles. When he did, he found the same thing happening again and again: someone would pull him aside to talk in a quiet room or ask if they could call him later to discuss the emotional toll of their own work with the dead and mourning.

Dixon and a handful of colleagues decided to start a peer support group in Ottawa, but when they looked for a prototype, they couldn’t ﬁnd anything else in existence.

A big part of the problem was a male-dominated industry where digniﬁed stoicism was the manner of operating, Dixon says. “Sometimes, for no reason at all, you’ll be in tears over something you hear in a funeral, which is very beautiful and very moving,” Dixon says. “And you would hide that—you would be in a bathroom or in an ofﬁce with the door closed, and you would be bawling your eyes out.” He credits a mass influx of women into funeral work with changing that. In 1995, 81 per cent of funeral directors and embalmers were male, according to Statistics Canada, but as of 2016, that was down to 59 per cent and seems destined to shift further—funeral director program enrolment is now majority female. 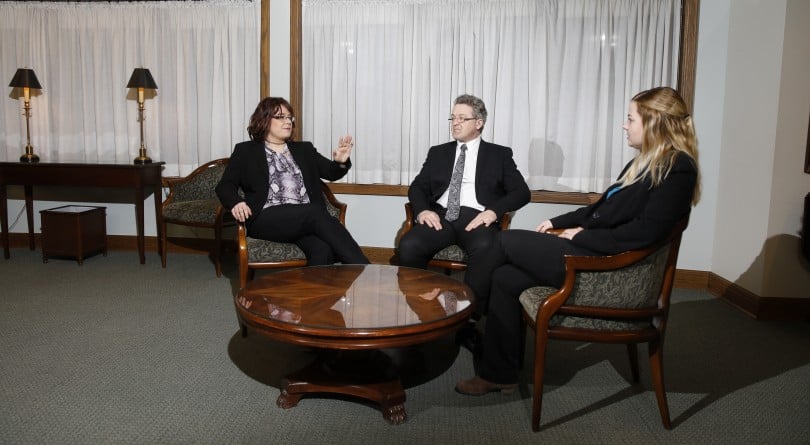 The standard-issue “How was your day?” question that everyone gets from their spouse or family after work is a fraught one for funeral service workers; there are privacy constraints, and it often feels like too much to go into with loved ones who aren’t in the business. “We don’t want them to live the trauma that we live as well, because as soon as we start talking about it, they’re receiving all the energy and the messages we’ve already taken in,” says Melanie Giroux, one of the co-founders of the group along with Dixon. “We don’t want to pass that on.”

Giroux is an embalmer at Hulse, Playfair & McGarry. She enrolled in a funeral services program (in Canada, funeral directors are provincially licensed) after ﬁve years as a hair and makeup artist because she wanted a way to use those skills with deeper empathy and meaning. That became very personal in September, when her father took his own life. They had been out of contact for a few months before he died, and for Giroux, it was obvious and necessary that she be the one to prepare his body, both so that she could say the things she had not gotten to say and so that it would be her gentle touch that left him looking like he was in a peaceful sleep. “If I didn’t do that, I would have felt like I didn’t do enough,” she says.

The experience has deepened her work, and like Dixon, she too has been diagnosed with PTSD. “It’s made me a little bit more sensitive to different circumstances I never could relate to because I’d never felt those feelings before,” she says. “It changes my touch, it changes the way I do things, it changes my tone.”

They held the ﬁrst meeting of their peer support group in August, and since then the group has grown to about 80 members and meets regularly. They have partnered with a counselling service to which they can refer people who need more help than a sympathetic ear, and as of the end of 2018, eight people involved had sought more formal help. “Where would those eight people be without that?” Dixon says. “I hate to think about where they’d be.” Funeral workers in others cities across Canada have reached out to start satellite groups.

Now, three years after his own crisis, Dixon ﬁnds himself in a much better place emotionally—so much so that at the age of 54, he is about to return to school to become a licensed funeral director. He views this not as a job but as a calling. An experienced funeral director once told him, “The minute you don’t feel anything is when you get out.” That still rings true to Dixon, but now he has a way to sift through the things he feels as he shepherds other people through the toughest days of their lives.