An adrenalin junkie who travelled the world in search of adventure, he had returned to university to finish his final year 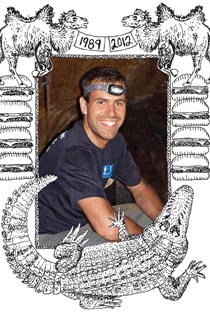 Gareth Aled Coombes was born in Winnipeg on May 18, 1989, to Vanessa Coombes, an administrative assistant with the provincial government and a single mom. The night he was born, Jan Wiebe, one of Vanessa’s best friends, remembers sneaking into the hospital after visiting hours to meet the baby. She and Vanessa spent the whole night grinning, giving Gareth kisses and counting his toes.

When Gareth was two, he and his mother moved to Victoria, so Vanessa could care for her elderly mother, whom Gareth called “Nainey.” Vanessa loved taking Gareth to nearby beaches, where they searched for curly moon shells or, after nightfall, watched the stars. When Gareth started kindergarten, Vanessa would take his classmates to beaches too, forging friendships with the other moms as Gareth and his pals climbed up on rocks and splashed in the water.

Gareth, a mischievous boy with a “big, toothy grin,” made friends easily, says Jan. From a young age, he was passionate about space. He knew the names of dozens of stars and dreamed of becoming an astronaut. As a boy, he’d have his mother measure him often to make sure he didn’t exceed NASA’s maximum allowable height for astronaut candidates: six foot four. When he hit six foot five, he was forced to work out a new plan: he would become a successful businessman and travel to space as a tourist.

When Gareth was 14, his grandma passed away. Six months later, Vanessa was diagnosed with lung cancer. Throughout his mom’s seven-month battle, Gareth was numb. He spent long hours in his room, alone with his books and video games. He would never leave home, not even for a few minutes, without giving Vanessa a hug. If he wasn’t sure his mother had her hug, he would turn around, and run back to the house to hug her again. Everyone who knew him agreed: Gareth gave the best hugs. Tall and strong, he could wrap just about anyone up in his arms and squeeze their troubles away.

After Vanessa’s death, Gareth moved into the home of one of his mom’s closest friends, Mary-Anne Kenwood; he and her daughter Mary had been friends since kindergarten. Mary-Anne, Jan and three other friends of Vanessa’s—Cynthia Hynes, Susan Campbell and Celia Stocker—teamed up to become Gareth’s “five moms.” “We all brought something different into Gareth’s life,” says Mary-Anne. Together, they gave him all the love, advice and hamburgers he needed to get through high school.

As a teen, Gareth became fascinated by billionaires like Richard Branson and Warren Buffett, and would read books about finance in his spare time. After high school, he studied engineering at Victoria’s Camosun College before being accepted to the Richard Ivey School of Business, the University of Western Ontario’s prestigious business program. When he wasn’t studying, Gareth was forever in search of adventure, and travelled all over the world. Whether he was summiting volcanoes in the Ethiopian desert, swimming with sharks in Borneo, sliding down Mount St. Helens on his bum, or trying to wrestle crocodiles in Costa Rica, he was always looking for new thrills, says his friend Alex Jepson. He’d travelled with Gareth through Tanzania and Zambia, where he once had to bribe police officers after Gareth got arrested for sitting on top of a moving train where he had been watching the sunset. In the summer of 2012, Gareth had gone to Africa to teach business at the National University of Rwanda in Butare, a program organized by Richard Ivey. While there, he also worked as a tour guide and travelled extensively throughout Africa. In Ethiopia, he and a friend decided that they had to see Erta Ale, the world’s hottest volcano. Gareth went to every bar in Addis Ababa to hunt for other travellers willing to make the 14-hour trek by camel. He reached the top of the volcano just before sunrise, though even some of their guides had become sick from the 50-degree heat. “Life is not meant to be linear,” Gareth wrote after returning to Canada. “I thrive off of chaos.”

In September, Gareth returned to London, Ont., for his final year at Richard Ivey. On Sept. 15, returning home from a night out, he and a friend took a common shortcut over a CPR bridge. While crossing its wooden rail slats, Gareth tripped and fell into the Thames Valley. He died at the scene of the fall. He was 23.