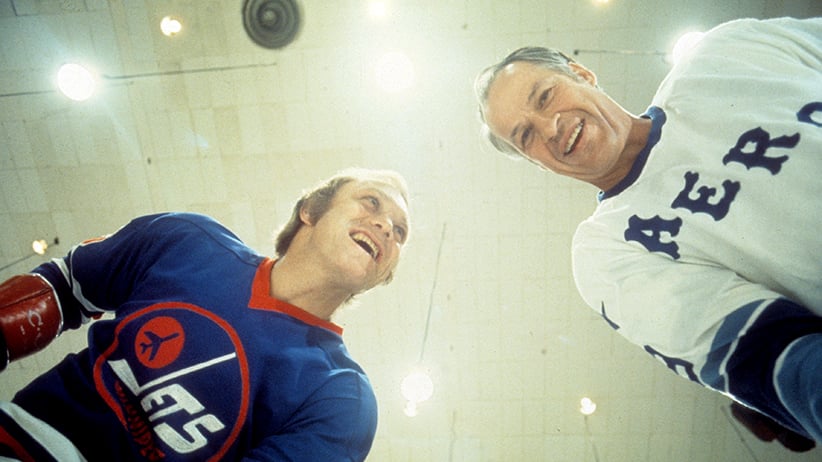 Bobby Hull #9 of the Winnipeg Jets and Gordie Howe #9 of the Houston Aeros faceoff over the camera during a photo shoot between the two legends before their game circa 1976 at the Summit in Houston, Texas. (Photo by Melchior DiGiacomo/Getty Images)

We remember Gordie Howe for his 2,421 games. For the 975 goals and 1,383 assists in the regular season, playing in an untouchable five decades of pro hockey. We remember him for his vicious elbows and polite humility. For his four Stanley Cups. For his physical longevity, for conquering the limits we aren’t able to conquer. We remember “Mr. Hockey” for the thrills we were alive to see, and for those sepia-toned tales passed down through the decades. We remember him for being the greatest player the game has known and, when that was done, for staying with us, never retreating from our adoration, for remaining Mr. Hockey until it was finally time to go.

He loved that role. Even as his health diminished through his 80s and the effects of dementia set in, Howe was happiest in the presence of his fans.

After Colleen, his wife of almost 56 years, died in 2009, he fell into a deep depression. It wasn’t until he got back onto the busy circuit of autograph signings and special appearances that those closest to Howe saw the joy in his eyes return. He genuinely appreciated our company. He enjoyed telling us stories and making our eyes grow wide with wonder—ruffling our hair and throwing a mock elbows to our jaws. Often, the autograph sessions would go more than two hours past schedule because Gordie refused to leave until everyone had a chance to chat with him.

When the Howe brothers tried to cut back on their dad’s public appearances, they noticed he would start to fade again. It was the fans who kept him going. As much as we adored what Howe gave the game, Howe loved what the game gave to him: us.

Howe believed professional athletes owed something to the fans who made their dreams possible. An autograph, a picture or a handshake was the least he could do, and he considered these as much a part of his job as scoring goals. In the summer months, Howe and Colleen would take their four kids—three sons and a daughter—across Canada on signing tours, stopping at every Eaton’s department store from coast to coast. Sure, it was an extra source of cash for the star, whose salary averaged between $25,000 and $30,000 through the prime of his career. But it was more than that for Howe. Every night, he returned to his hotel room and signed more than a thousand greeting cards and photos to give to fans the next day.

He wanted to make sure he had time to speak with each person—to tell a joke, throw an elbow and pose for a picture. The Howe family would drive from town to town, sometimes covering two or three a day. “Dad always had a certain mystique,” says Howe’s son Mark, who is now a Hall of Famer himself. “I’ve only met a few people in life who have that. It’s not something they work on, it’s natural. That’s what makes Dad so special.” Howe would visit children in the cancer ward at local hospitals.“They’d take you into a room and say, ‘This child will be lucky to live another seven days,’ ” says Mark, “and, by the end of Dad’s visit, the kid would be crying from laughing so hard.”

Howe’s humble beginnings made him grateful for the game. He was born on March 31, 1928, in Floral, Sask. He was one of nine children in a poor family that soon moved to Saskatoon, trying to survive the Great Depression. Howe stuffed newspapers and magazines into his socks to use as shin pads. His mother saved up money for months to buy him his first proper pair of skates. Local kids played the game outdoors with a tennis ball, which would be warmed in a neighbour’s oven when it froze. Howe was signed by the Detroit Red Wings when he was just 16 years old and began playing with the team in 1946, when he was 18. He was an unusual mix of size and skill—a right-winger who intimidated opponents with his ability to score and hit in equal measure. In Detroit, he was part of the famous “Production Line” with Sid Abel and Ted Lindsay and led the Red Wings to those four Cups. His career—and his life—were almost cut short in 1952, when he had a violent collision with Maple Leafs captain Ted Kennedy during a playoff game. Howe, then 21, lay unconscious on the ice, blood gushing from his head. Doctors thought the hemorrhage might kill him. The next season, he won the NHL scoring title. Despite his aggressive, elbows-first approach to the game, Mr. Hockey was still playing nearly 50 years after he started.

In 1980, Howe returned to Detroit to play in his 23rd All-Star game as a member of the NHL’s Hartford Whalers. He was 51 and preparing to retire at the end of the season. Howe was introduced last for the Prince of Wales Conference. “And from the Hartford Whalers . . .” the announcer said, and the fans were on their feet before he could finish. Mr. Hockey skated onto the ice in his white all-star jersey, the only player with grey hair. “Representing all of hockey with great distinction for five decades—No. 9.”

The fans erupted, as they had so many times before. They roared as Howe meekly waved, looked to the ice and skated to the bench, not knowing how to stop their praise.

And the cheers kept coming, as though they’d never stop.

“Just listen to these Detroit fans,” the announcer said. “They’re still on their feet. This ovation may never end.” And the fans kept going, clapping wildly for a legend who remembered how to be a man, how to be one of us—with us—to the very end.

Dan Robson is a senior writer at Sportsnet magazine. 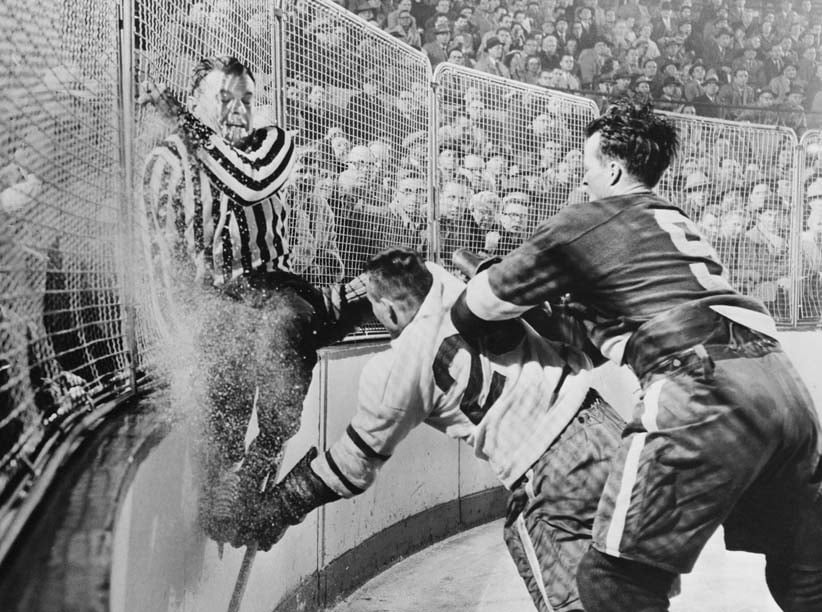