How Canadian charities offer pre-emptive gifts to potential donors, and then follow up with a healthy dose of guilt 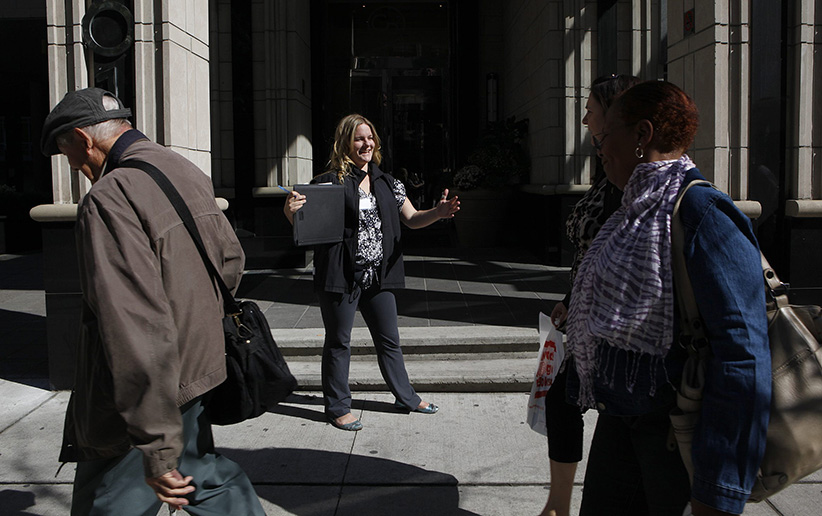 Canvaser Emily Smits, in the black vest, solicits donations on the street in Toronto. (Deborah Baic/Globe and Mail/CP)

“Gift enclosed” reads the package, but it encloses only guilt. It’s a calendar featuring a rescued rabbit, a dishevelled polar bear and a request for $35 for People for the Ethical Treatment of Animals (PETA). The following week comes a letter reminding targets that they haven’t yet paid for the calendars. Of course they haven’t; they never ordered them.

Charities in Canada have become feistier as of late. Hoping to compensate for a declining number of Canadian donors, charities like PETA are flooding mailboxes, confronting pedestrians and encouraging pre-authorized payments that are difficult to end. However, the desperation has started a vicious cycle, in which Canadians become even less likely to donate when they get annoyed with aggressive altruists.

“There seems to be no boundaries in the charity market,” says Bruce Philp, a marketing consultant and columnist for Canadian Business. He says that charities have “bad behaviour” because they feel their ends justify their means, or because they think they only need one donation rather than a frequent customer—similar to political candidates. “The most horrible marketing in the world is being done by politicians and charities,” says Philp.

To beat each other to the mailbox, charities start sending out holiday catalogues in November. When Plan International Canada began sending catalogues in 2003, it sent its package ahead of World Vision. Organizations like Oxfam include fine print in their catalogues, noting that the items are actually “symbolic gifts,” which means that the donation will not buy the specific chicken or bicycle as requested but rather go to the organization generally. “That really pisses me off,” says Greg Thomson, a researcher with the watchdog Charity Intelligence Canada. “If you’re trying to be explicit with this menu of things you can buy for $40 or $60 … if you buy a goat, there’s a goat that goes.”

Charities also deter some people who worry the donation will go toward glitzy advertising campaigns. A winter lottery for SickKids includes prizes of $1 million cash and a Jaguar. In the 2016 winter lottery, only eight per cent of the price of tickets went toward the cause, while 92 per cent paid for prizes and the operation of the lottery itself. A Lotto 6/49 ticket is arguably more socially beneficial, as 13 per cent goes to taxes, while charity lottery tickets are tax-deductible. SickKids also just launched its boldest campaign ever, depicting children as superheroes, and it spends around 30 per cent of its annual donation revenue on ads like this. While some potential donors don’t want to support such flashy ads, the charity needs to advertise to stay on people’s radar. As Thomson says, “It’s a bit of a Catch 22.”

The reality is, Canadian donors are in decline. Between 2004 and 2013, the number of Canadians giving to charities dropped from 85 per cent of those aged 15 years and older to 82 per cent, according to Statistics Canada.* Although the remaining donors are giving larger donations, many of the donors are above age 55, so charities need to reach a broader group to be sustainable. “We’re seeing more bold campaigns right now,” says Caroline Riseboro, President of Plan International Canada. “The nature of humans is not that they’re calling up charities and saying, ‘Will you please take my money today?’ So we do need to ask.”

Asking can be awkward. While unsolicited gifts like calendars have been popular since the months following the Second World War, when the War Amps sent out keychains, a more recent phenomenon is asking for donations at cash registers. Cashiers sometimes ask customers for donations loudly enough to make them ashamed for declining to donate, a practice known as “chugging” in the U.K. Meanwhile, UNICEF runs a campaign asking people to leave donations in their wills, called “legacy gifts.” While the organization previously confined the campaign to the month of May, it expanded to September and October this year, asking people of all ages to think about their deaths.

Charities do have a code of ethics. Imagine Canada, a body with 1,250 member organizations, sets out fundraising standards. Riseboro of Plan International explains, “Any professional knows philanthropy is not something that should be coerced.” Meg French, chief programs officer of UNICEF Canada, says of the legacy gifts campaign: “If someone’s not comfortable, we end the call right away.”

Ethics aside, critics question the efficacy of some campaigns. Food banks place donation bins in grocery stores during the holidays, even though collecting cash would be exponentially more valuable. “I know it feels good to drop a can of soup in a bin,” says Thomson, “but the logistics of getting it to a warehouse, all mixed up with tuna and macaroni … with [the food banks’]  connections, a $5 donation could buy $20 worth of soup.” Further, at holiday fundraising galas, half the price of the ticket often goes toward the cost of the event. “Think of it as entertainment,” Thomson says.

However, charities wonder why Canadians aren’t more tolerant. As Riseboro notes, people don’t seem to mind receiving free gifts or offers from retailers. “We wouldn’t say, ‘You gave me your flyer in the mail; you’re over-marketing,’ ” says Riseboro. “For some reason, because it’s about philanthropy, we seem to be less forgiving.” Indeed, people may criticize PETA for sending them calendars and overtly asking for donations, yet gladly accept free samples from companies that seek their money but just don’t state their intentions. What gives?