Graham Skilliter is the ref with the right stripes

The NHL had only one official’s job open this year. Graham Skilliter got it. 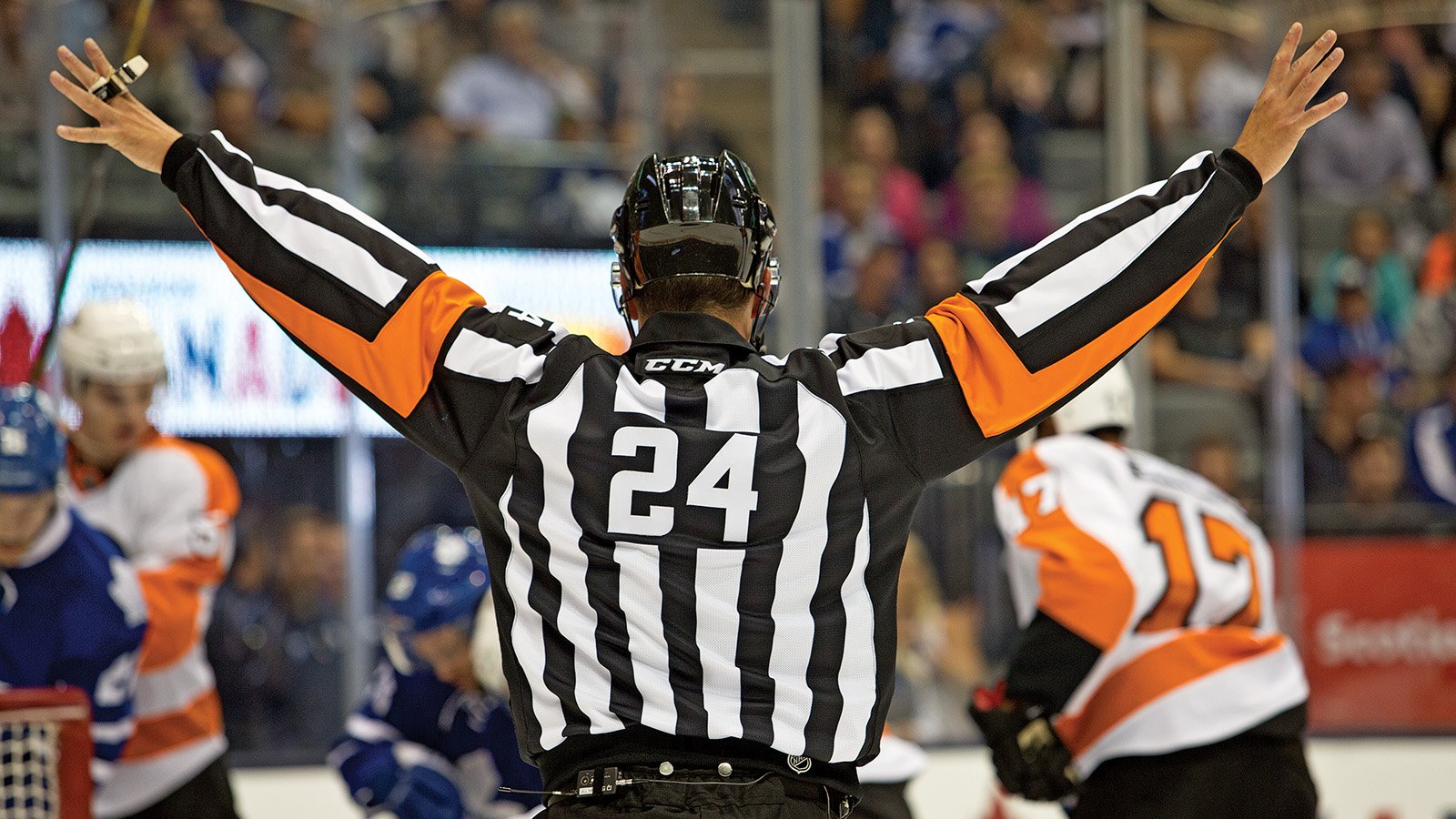 The call-up to “the Show” came via email, on a Friday morning this past July, when Graham Skilliter was halfway through the 14-hour drive from his home in Saskatoon to his wedding weekend in Kelowna, B.C. He found it in his inbox during a pit stop for coffee outside Calgary: a summons to the NHL offices in Toronto to meet with Stephen Walkom, the league’s director of officiating. The 29-year-old typed back a polite note asking for a postponement and then went outside to call his soon-to-be bride, Chelsea. “The message didn’t say what the meeting was about, but I knew,” says Skilliter. “And I felt quite overwhelmed with emotion.”

The league employs 33 referees and 33 linesmen. For this season, there was one job open. Skilliter first put on the stripes as an 11-year-old, policing his peers in minor hockey games in his hometown of Kindersley, Sask. By 16, he was calling the lines in the Saskatchewan Junior Hockey League (SJHL), working alongside his father, Bruce, a longtime ref. After high school, he moved to Saskatoon and made the jump to the Western Hockey League (WHL). The dream of someday calling games in the NHL began to take hold. “Honestly, I started doing it because my dad did,” he says, “and then it just turned into a passion.”

A six-year apprenticeship in the WHL—two as a linesman, and four more as a ref—was followed by a single season in the East Coast Hockey League, the lowest rung of the pro farm system. In 2011, NHL officiating scouts signed Skilliter to a minor league contract—freeing him, for the first time, of the need for a day job—and assigned him to the American Hockey League. He got his initial experience with NHL players working the Spengler Cup in Switzerland during the 2012 lockout, and has been pressed into spot duty in the big league 28 times since. But the elongated audition had mostly gone on in the feeder rinks in places like Oklahoma City, Milwaukee, Des Moines and Hamilton. Travelling light with his skates, referee’s gear and a small suitcase, he’s spent more than 200 nights on the road during each of the last three seasons. This year, he finally made it back home on June 19, following the end of the AHL Calder Cup finals.

Skilliter has always loved hockey, although he realized early on that he didn’t have much of a future as a player. He watches it obsessively, even in his off-hours, downloading games to his iPad, tuning in at the hotel or his living room in Saskatoon. But he’s not viewing the games the same way everyone else is. “I’m watching the play and the officials, too,” he says. “I’ll jump out of my chair a little bit and yell, ‘Hook!’ across the room. It’s not work, but I am studying my craft.”

When Skilliter got to Toronto, a few weeks after the wedding, Walkom spoke about the sacrifices involved in being an NHL referee—the travel, the pressure, the scrutiny. He asked Skilliter to go away and talk it over with Chelsea before making his decision. That wasn’t necessary. The newlyweds were already fully on board and considering a move to a city like Chicago or Vancouver so that Graham could be closer to a major airport and get some “home” games each season.

As the 2014-15 NHL season begins, Skilliter’s dream becomes reality. Out of a pool of 80,000 hockey officials in North America, he has found his way to the one available job at the pinnacle of the profession. Now, all that’s left to do is prove that he belongs there.

The cream of the crop are sweating it out in a hotel ballroom near Toronto’s airport. Ranging in age from the 29-year-old rookie to 56-year-old Paul Devorski—entering his 23rd and final season as an NHL ref—their body types run from men’s-mag chiselled to moderately healthy dad. Yet they all have to be fit enough to meet the same exacting standards: One minute each of push-ups and crunches to the beat of a metronome. Then two minutes in various plank positions. Two cracks at the standing broad jump. (“Skilly,” as his new colleagues have dubbed him, wins with 97 cm, a small payoff for all the dead-lifts, squats and sprinting he does five days a week during the off-season.) Twenty yards of back-and-forth shuttle runs in under five seconds. And finally, a lung-busting stint on the stationary bikes, maintaining 90 rpm, while the resistance increases by 50 watts each minute. Later in the afternoon, they will hit the ice for more drills and conditioning. The next morning’s team-building activity is a crossfit competition. At last year’s mini-camp, recruits had to undertake a Tough Mudder race. The year before, it was a military basic training session.

Walkom, who refereed more than 1,000 games in his NHL career, including four Stanley Cup finals, is a firm believer in fitness.

“Your job as an official is to stay out of the way, and if you’re not an athlete, you can’t do that,” he says. Now in his second stint as director of officiating (he first took the job in 2005, then returned to the ice in the fall of 2009, for four more seasons) he has tried to cast a wider net for new talent, inviting former junior and college players to tryout sessions, and creating a scouting system that identifies and tracks prospects. “We’ve got a depth chart, just like every hockey club does,” he says. But athleticism and skating ability are only part of what the NHL is looking for. Quick decision-making, sound judgment, good communication skills and an unflappable demeanour are even more important. “At the NHL level, every call matters, every call is reviewed, every call can be seen in high definition,” says Walkom. The league’s “Situation Room,” just down the hall from his Toronto office, tracks every game in real time, from multiple camera angles. On-ice errors or missed calls don’t go unnoticed. Videos of the most egregious mistakes have usually been shared among senior NHL executives long before the third period ends.

Bruce Skilliter, Graham’s dad, wasn’t initially sure that his boy was cut out for reffing. “He was fairly timid and laid-back. I thought if somebody yelled at him, he’d be done,” the retired Sask Power worker says from his home in La Ronge, Sask. Then there was the time, when Graham was in his early teens and Bruce was his officiating supervisor, that he actually advised his son to quit. “I felt he wasn’t giving it his all,” he says. But those qualms disappeared long ago. Still calling games in the SJHL, now Bruce is the one who’s learning, asking about the interpretation of new rules, or the ever-evolving standards. The only nit he can pick is Graham’s tendency to speak a little too quickly when he clicks on his mic to announce a penalty call. “He’s gone a lot further than I ever went,” Bruce says, “and he has a much better temperament for it than I do.”

Skilliter isn’t sure where that composure comes from. He’s never been the excitable type—a quality which became even more pronounced during his time in the WHL, when he held down jobs as a fireman and then as an ambulance attendant. “I’m used to things happening quickly, being out of control, and dealing with them in the best fashion you can,” he says.

The jump from the AHL was tough at first—Skilliter says the NHL game is so fast that it feels as if it is somehow two levels above the minors. But all those tryouts over the last few seasons have given him a certain level of comfort. He knows he can keep up with the play and deal with the crowds and the inevitable criticism. “You have to be confident. There are a lot of people tell you you’re wrong when you know that you’re right.”

It’s a Tuesday night at the Air Canada Centre in Toronto, and Skilliter and his fellow officials are being served a reminder of where they fit in the world of players and fans. Although it’s still the pre-season, a crowd that’s paid good money to watch a rough approximation of the Leafs take on the similarly garrisoned Flyers is well-attuned to slights and oversights. A James van Riemsdyk bullet that hits the back bar of the net and bounces out is called a no-goal, and the boos rain down. (There are no replay reviews during exhibition games.) It’s Skilliter’s reffing partner standing right behind the net, the veteran Wes McCauley, who takes the brunt of the abuse. But the rookie hears it, too, when he calls Dion Phaneuf for cross-checking. The Leafs’ captain jaws with him all the way to the box.

Post-game, in the tiny officials’ dressing room next to where the Zamboni parks, Skilliter hesitates a bit when asked how the conversation went. “He was saying that he hadn’t hit him that hard. I told him, ‘You got in four [shots] for one [penalty], so you’re all right.’ ” His colleagues, busy scarfing down a late dinner of pepperoni pizza and soft drinks, laugh appreciatively.

It takes time for officials to build a relationship with the players and coaches, and earn their respect and trust. “You need to prove yourself every night,” Skilliter says. This game, only the second of the year, was just another step. It wasn’t exactly perfect. Still adjusting to the NHL’s two-ref system—the AHL mostly goes with one—he got caught out of position on some occasions. Once, he got hit with the puck. And he fell—a goof that means he has to buy the after-work beers. But overall, Skilliter is pleased. When the puck drops on this NHL season, he will be there at centre ice. “It’s pretty cool working, knowing that you’re not going back to Peoria, [Ill.] in a week,” he says. “You’re sticking now.” Right at the top.

FILED UNDER: Graham Skilliter Hockey Inside the NHL NHL refereeing