A once-bustling Greyhound rest stop sits empty. It's a relic of a bygone era.

The Log Cabin Restaurant, an empty way station where you could stretch your legs and feed the caged bears, symbolizes the end of the bus line age in Canada 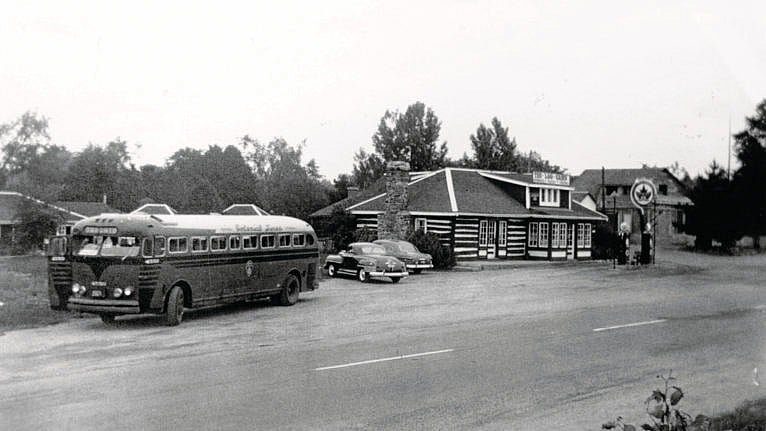 In the restaurant’s heyday, Supertest gas flowed from the pumps, hamburgers cost a quarter and homemade ice cream—made from 50 per cent milk, 50 per cent separated cream—was five cents a cone. Giving the resident caged bear bottles of Coke to guzzle? Now that was just priceless.

The Price brothers’ log cabin in Actinolite, Ont., was such a natural stopping point between Toronto and Ottawa that “Halfway House” was written on its placemats. It was during those heady days after the Second World War, when a place like this symbolized all the potential of the postwar economy, that the buses started coming.

From the first day Colonial Coach Lines pulled over in 1947, through the Voyageur years and into the Greyhound era of the late ’90s, this much-loved joint—or much-hated, in more recent times, if you were cranky from the cramped bus seats and dissatisfied with plastic-wrapped baked goods—was a reliable place to stretch your legs and buy a candy bar.

But three years ago, Greyhound ceased using the Log Cabin Restaurant as a rest stop. Almost two years ago, as business subsequently dwindled, its owner-operators of almost 30 years retired. Then, citing pandemic losses, Greyhound announced in May it was shutting down its services in Canada altogether. And this once-bustling rest stop sits empty. The longer it does, the more it looks like a relic of a bygone era.

In 1932, when a new stretch of Highway 7 was paved between Kaladar and Actinolite, Merritt Price, a retired United Church minister, saw an opportunity. Price bought up an old Lutheran church and used its logs to start building what would become a landmark along the route. His sons, Bruce and Bud, opened a restaurant in the new log cabin—and welcomed its first bear—in 1933.

“The original log cabin was very attractive,” says Evan Morton, curator of the nearby Tweed Heritage Centre. “Their dining room was highly acclaimed.” It wasn’t just a restaurant, but a kind of motel, too. The Prices would welcome weary travellers to stay overnight in several smaller, rudimentary cabins on the property.

The bears, Morton is at pains to emphasize, were rescued cubs that would have otherwise been killed in the wild. In the Price brothers’ care, in cages adjacent to the restaurant, they lived longer-than-average lives. The first, Teddy, lived to be 31. Two others, Buster and Bandy, were captured in 1950; they died in 1974 and 1978, respectively. “They enjoyed Coke and Pepsi and chocolate bars and ice cream,” Morton says. “But Bud Price always made sure they had a balanced diet.” 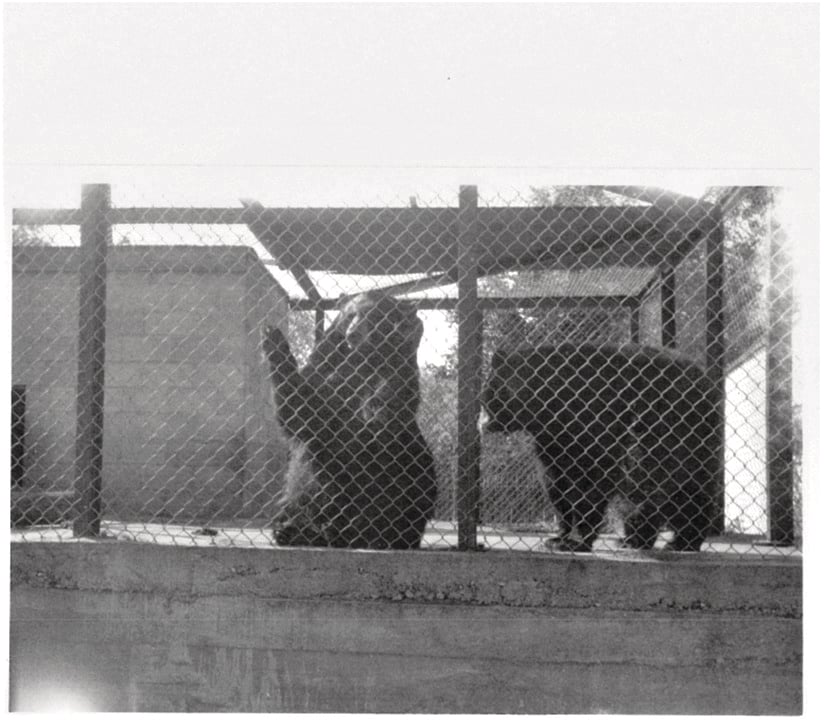 Buster and Bandy (Courtesy of the Tweed and Area Heritage Centre)

In 1950, a few years after the buses started coming, the brothers had the restaurant torn down and built a sturdier structure in its place. But in name, it remained the Log Cabin.

After more than 50 years in the Price family, the property changed hands in the mid-’80s. Sung Hwan Lee and his wife, Monica, bought it not long after, in 1992. 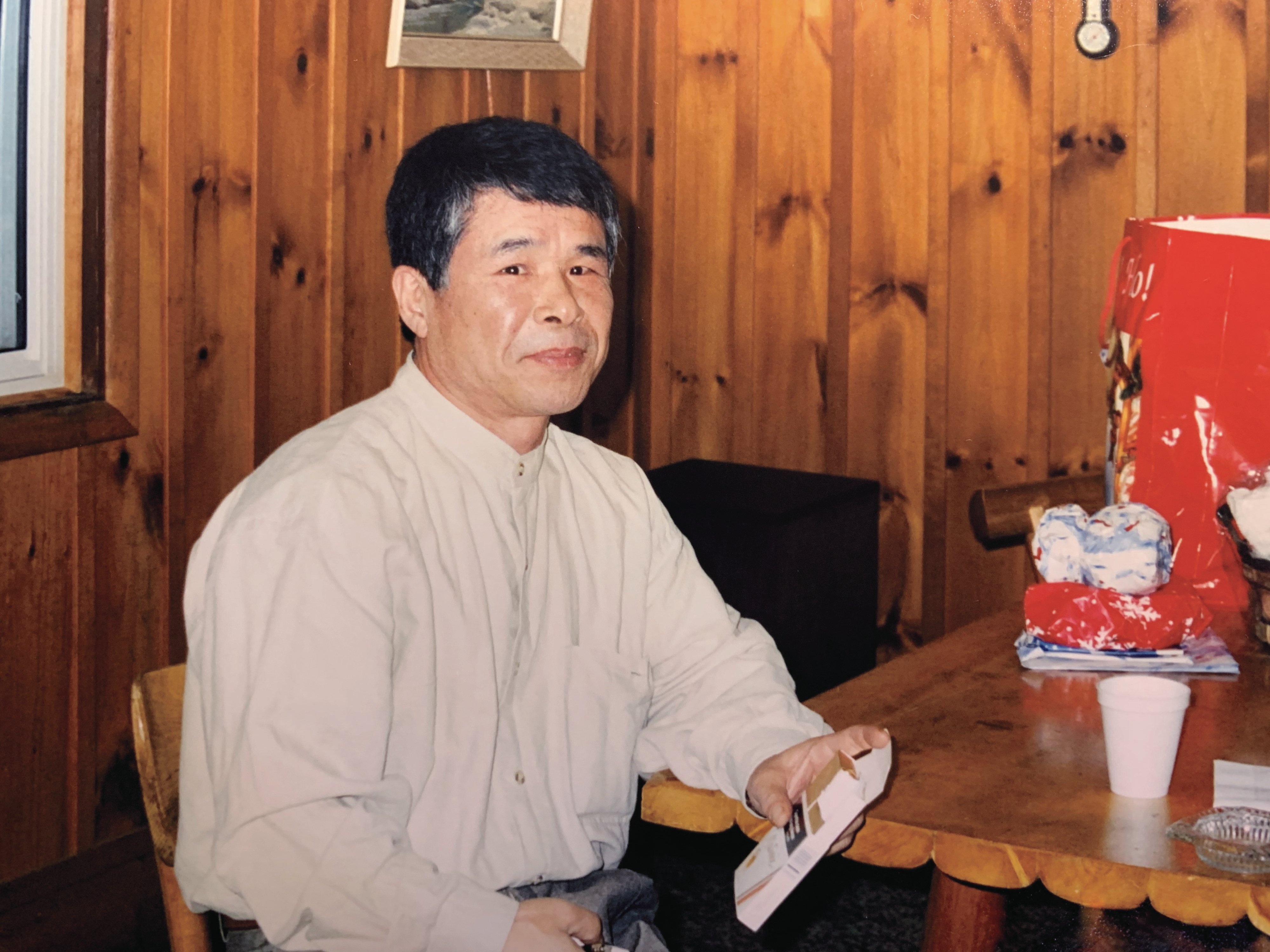 The Lees, who had immigrated to Canada from South Korea, enjoyed connecting with all different kinds of customers, some of whom would regale them with stories about the bears that drank Coke. For a long time, members of the Price family still lived across the street. They’d get together with the Lees for dinner sometimes, Lee says, and show them old menus—the ones where hamburgers were listed for 25 cents.

The Lees lived in an apartment on the second floor of the restaurant. They’d rise early enough to open it before the first bus arrived for a stopover around 9 a.m.; in the evening, sometimes they’d stay up as late as 2 a.m. to offer a hot beverage to travellers held up by the occasional snowstorm.

At its peak, the restaurant served some 100,000 customers a year, Lee estimates. Many were college or university students on shoestring budgets, who’d schlep back and forth on the Greyhound to visit their families. “We offered lots of free meals to students,” Lee says. Sometimes they would come back and repay the kindness. Once, Lee says, a girl came up to him and paid her bill 10 years after the fact.

In the ’90s, Actinolite still saw lots of traffic from charter buses, along with the Voyageurs-cum-Greyhounds, Lee says. But year by year, he says, fewer and fewer charter buses would pull in. In 2018, Greyhound switched to “express” trips along the 401 and 416 because of “a decline in ridership along the local route,” according to Greyhound Lines, Inc., which still operates in the United States. Not long after, Lee says, “it was time to retire.”

The Lees, now in their early 70s, live in Toronto. They’re trying to sell the Log Cabin property, but as of this writing it had been on the market for a while, listed for $1 million. Lee thinks prospective buyers aren’t seeing the potential of the great location, at the nexus of Highway 7 and Highway 37, which leads down to the 401. 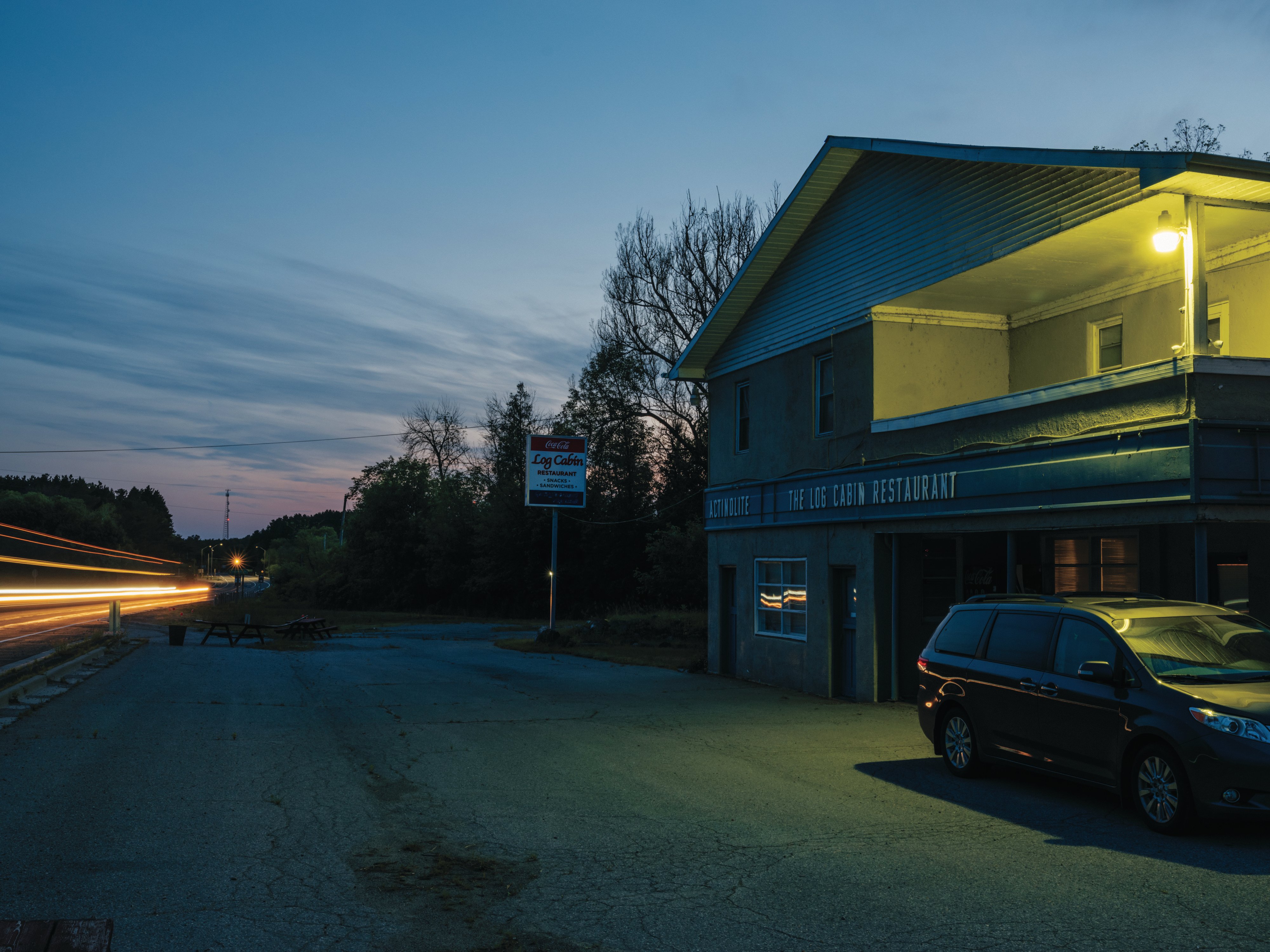 The Lees, now in their 70s, decided it was time to retire in 2018 after Greyhound buses began bypassing Actinolite and the Log Cabin Restaurant (Photograph by Johnny C.Y. Lam)

There is plenty of vehicle traffic: the shortest route from Ottawa to Toronto still takes you past Actinolite. But if Merritt Price expected an economic boom all those years ago, it never quite took.

“If you travel along there, you’ll see a lot of closed motels and restaurants. Between Perth and Actinolite, there were many people who tried different ventures and they just didn’t seem to succeed,” Morton says. “I often think of Highway 7 as a highway of broken dreams.”

The Lees still visit Actinolite sometimes and stay in the Log Cabin Restaurant’s upstairs apartment. They consider it a cottage—it’s nice to go there, Lee says, and “enjoy the quiet.” Driving along this part of the highway today, that quiet is hard to miss.