An underrepresented voice in drug policy go to the UN: mothers with an all-too-personal understanding of the cost of drug abuse 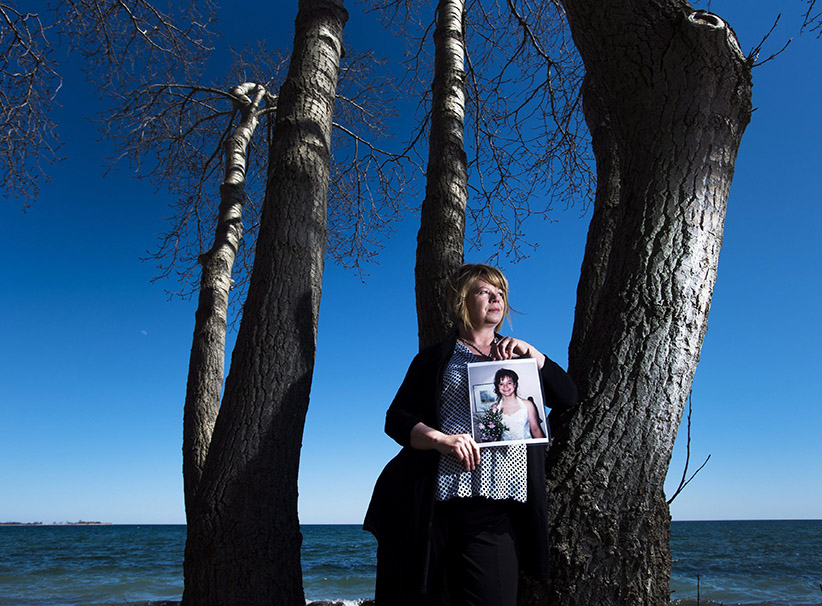 Donna May holds a photograph of her late daughter Jac. Jac died in 2012 after overdosing on pain medication prescribed to help her cope with a flesh-eating disease she’d contracted on the streets. (Nathan Denette/CP)

A coalition of grieving Canadian mothers whose children died of a drug overdose have travelled to the United Nations in New York City this week to promote their message that showing “tough love” to addicts is a misguided intervention—with potentially lethal consequences.

Moms United and Mandated to Saving the Lives of Drug Users (MumsDU) is attending the UN Special Session of the General Assembly on the World Drug Problem, from April 19 to 21. They are advocating for more harm-reduction policies and greater education and awareness about drug addiction and its impact on users, and their loved ones.

“The family voice and the addict’s voice are missing from the picture,” says Donna May, one of the founding members of MumsDU, who is leading the group’s efforts this week, which include a rally and presentation. “Addiction is not treatable in the ways we have been using to date, and it’s time for change.”

The call to action can’t come soon enough given how the narcotics crisis in Canada has intensified lately: The prescription painkiller fentanyl has fast become a leading cause of opioid deaths in Ontario, Alberta and British Columbia. Last week, B.C. declared a public health emergency after the province counted 76 illicit drug overdose deaths in January—the most in one month since 2007. At this pace, up to 800 people could die of an overdose by year’s end, compared to 474 last year.

Related: Inside the fentanyl crisis

This emerging epidemic will inform discussions initiated by federal Health Minister Jane Philpott during her address to international delegates at the UN on Wednesday. Philpott emphasized that future drug policies should evolve from a public health mandate rather than a fixation on law enforcement. Prohibition and criminalization were central to the previous federal government’s approach to drug policy. To this end, Philpott announced plans to introduce marijuana legislation in the spring of 2017. She also applauded Insite, a supervised injection program.

It’s a significant shift in focus that advocates such as May welcome—and May could, in fact, have helped it along. A few weeks ago, she was invited on behalf of MumsDU to a roundtable discussion in Ottawa with Philpott and other non-governmental organizations focusing on drug use and public health strategies for substance abusers. During her speech on Wednesday, Philpott mentioned the roundtable, saying “the most powerful voice of all belonged to a mother.”

Among the initiatives that May and others are pushing for is a Good Samaritan law across Canada, which would protect individuals who alert first responders of an overdose from being criminalized for their own drug use. “Many of us have children who died needlessly because people [were] afraid to call 911,” says May. Her group is also advocating for uniformity and consistency in the reporting of overdose statistics across the country, and a rethink of the over-prescription of opioids by doctors to patients. May is also calling for more supervised consumption sites across Canada. “The mission of MumsDU is to keep our drug users safe so they are alive to make better choices.”

May knows the significance of this particular issue firsthand. Her opioid-addicted daughter contracted flesh-eating disease in early 2012 while injecting drugs on the streets of Vancouver, and passed away eight months later: She overdosed on painkillers prescribed to her for the infection.

On Thursday, May will deliver a three-minute address to the UN about her personal loss and the lessons learned. The day will be especially poignant because it will mark exactly 44 months since her daughter’s death. In this way, delivering her message will mark a new anniversary. “I’m proud of myself and my daughter and the experiences she had, even the bad ones,” says May, because they demonstrate “what needs to be changed.”