How Gwyneth Paltrow’s ‘Goop’ is duping us 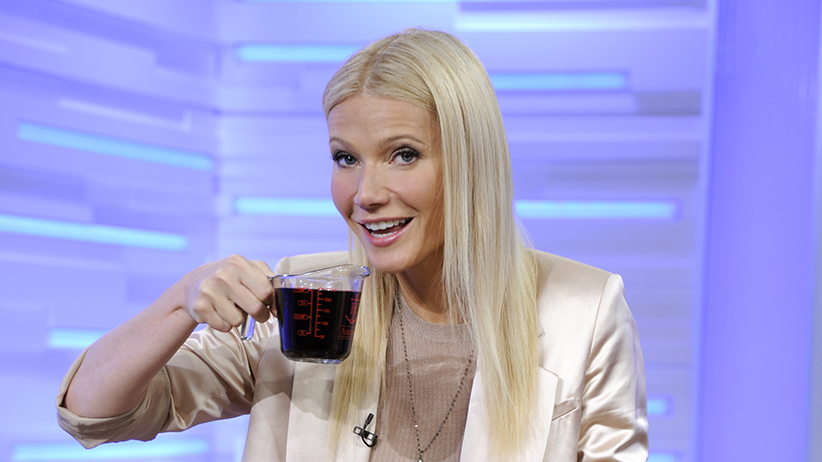 When Timothy Caulfield attended a star-studded film premiere in Los Angeles last year, he did not expect to be overwhelmed with giddiness at the sight of actors James Franco and Emma Watson. “I’m too cool for this,” he recalls telling himself as he stood among dozens of screaming fans. But, the moment the stars hit the red carpet, Caulfield began to ooh and aah with everyone else. “I got totally into it,” says Caulfield, a University of Alberta professor and Canada Research Chair in health law and policy. It didn’t matter what Franco and Watson were known for, but that they were known, period. “Perhaps we are hard-wired to get excited by individuals with broad cultural status,” he says. Fame, no matter its origin, is electric. It moves us to stand on our toes to see people we know absolutely nothing about, whose talents are sometimes non-existent (Kim Kardashian) or unknown (Kate Middleton). But perhaps, more insidiously, it moves us to buy things we don’t need, and adopt lifestyles that are detrimental to both our bank accounts and our physical health. This is what makes Caulfield uncomfortable. His forthcoming book, Is Gwyneth Paltrow Wrong About Everything? (short answer: yes) is an exhaustively researched, hilarious take on how celebrity culture influences everyday life, from ill-fated attempts to make it big on reality TV to celebrity-endorsed diets and beauty regimens.

Caulfield doesn’t just write about celebrity trends for the book; he tries them out for himself. He stands in line for that movie premiere, attempts (unsuccessfully) to audition for American Idol, and goes on a “cleanse” personally endorsed by Paltrow on her website, Goop, that is tantamount to starvation. The verdict? He loses nine pounds in three weeks and regains the weight almost immediately after he resumes eating like a normal human being.

He does all this to prove that common folk will do almost anything at the suggestion of celebrities, whose spurious claims have built multi-million-dollar businesses. Nowhere is this more obvious than in the health sector, where juice cleanses and gluten-free diets have transformed popular opinion about nutrition in North America, despite a dearth of research on their effectiveness and safety. The cognitive dissonance required to believe that celebrity trends work (the Victoria Beckham bird-poop facial comes to mind) may be evidence that, although we live in a scientifically advanced society, we are grossly lacking in scientific knowledge. Consider the popular term “toxin,” used by health and beauty gurus everywhere (Paltrow included) to peddle their mostly useless wares. According to one popular U.K. blog, Honestly Healthy Food, the No. 1 “stress toxin” in our lives is coffee. No. 2 is “reading or listening to the news.” Caulfield says toxins “are the new evil spirit,” pointing to American writer Eula Bliss’s 2014 book On Immunity, which touches on celebrities’ influence on vaccination rates. According to Bliss, toxins are to the 21st century what filth was to the Victorian age. “Where the word ‘filth’ once suggested, with its moralist air, the evils of the flesh,” writes Bliss, “the word ‘toxic’ now condemns the chemical evils of our industrial world.” No one is better at this type of fear-mongering than celebrity doctors. The problem with people like Dr. Oz is that erroneous information is mixed in with the truth, according to Julia Belluz, a science reporter at Vox Media in Washington. Dr. Oz may promote dietary supplements most people don’t need, but he is also a firm believer in a good night’s sleep. “If half of what he’s saying is sound advice, but a quarter is insanity, how do you tell the difference?”

It may be easier, where Paltrow is concerned, because she is not a doctor. But the unique danger of Paltrow’s brand of faux science is that those who live by it have a desire, presumably, to be like Paltrow herself—to obtain that fresh glow of the eternally youthful, care-free celebrity; an existence that is likely more myth than reality. “Even if an individual makes it big,” writes Caulfield, “the attainment of the goal is unlikely to provide the promised long-term wealth, or, more important, the desired happiness and well-being. There is no pot at the end of the rainbow.”