Survey provided paints a grim picture, as women believe more than a quarter of men are the type to harass females 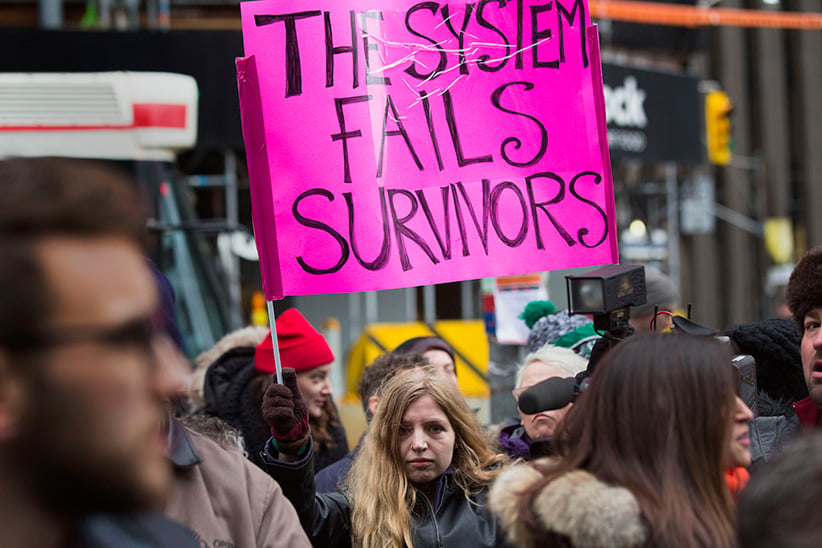 Demonstrators in Toronto responding to the verdict in the Jian Ghomeshi trial; acquitted of criminal charges, Ghomeshi was also accused of workplace sexual harassment at the CBC (Chris So/Toronto Star/Getty Images)

In the wake of sexual harassment allegations in Hollywood and the scandal surrounding powerful producer Harvey Weinstein, a new poll suggests that more than half of Canadian women experience “unwanted sexual pressure.” About two million are victims of sexual pressure on a regular basis, the survey from Abacus Data indicates, while six million more experience sexual pressure at least occasionally. Some 85 per cent of men surveyed, by comparison, said it’s never happened to them.

For working-aged women, the numbers are particularly bleak. Among those surveyed between 30 and 44, nearly six out of 10 said they’ve experienced unwanted sexual pressure; two of 10 said it happened often or very often. Forty-six per cent aged 60 and over said they’d experienced instances of sexual pressure at some point in their lives—slightly higher than women aged 45 to 59 (44 per cent).

Among men between 30 and 59, about 20 per cent say they’ve experienced sexual pressure. With men aged 18 to 29, the number shrinks to six per cent, but for older men, it rises to one out of 10. Overall, 35 per cent of Canadians experience sexual pressure either regularly or at some point in their lives, the poll suggests.

Abacus used the term “unwanted sexual pressure” in the poll to elicit responses about overtly sexual action forced on women that is more specific than harassment, said CEO David Coletto. Other questions referenced the broad spectrum of behaviours regarded as sexual harassment, Coletto noted, explaining: “Sexual pressure is a more direct type of sexual harassment. It’s being pressured into doing something you may be really uncomfortable doing, whereas sexual harassment is a broader type of behaviour that could include the language people use around you or the way they talk about women or colleagues.”

The poll indicates that over 50 per cent of both men and women believe sexual harassment occurs in their workplace, with the number for women marginally higher. This similarity, Coletto said, is due partly to recent news in Hollywood, where a number of women have accused Weinstein of sexual assault and rape. “These events do raise awareness,” he said, noting that high-profile sectors like the entertainment world are not exceptions. “They get us thinking about our own workplaces, our own lives and whether we see this happening—so it does help us recognize it.” Notably, 15 per cent of men aged 18 to 29 reported that sexual harassment is “quite common” in their workplace—a greater proportion than women in the same age group—which Coletto said points to generational and societal differences among men.

One major discrepancy is the response to harassment in the workplace. More men than women (37 and 23 per cent, respectively) believe that sexual harassment is usually reported or punished. Among 18- to 29-year-olds, fully 73 per cent of women believe perpetrators face no consequences compared to 51 per cent of men, which may suggest that many women doubt their complaints will be taken seriously, says Angela Dionisi, a professor of management at Carleton University, who studies sexual harassment and aggression in the workplace. “Victims typically do not report harassment and there’s different reasons for that,” Dionisi says. “Victims are often afraid of backlash, they’re afraid of secondary victimization and being labelled a whistleblower and so on.”

The poll indicates that women believe 26 out of 100 men are the kind who would harass a woman. In a similar example, women believe that out of 100 women, nearly 50 of them will be harassed at some point in their lives. The combined results, including the responses from men, are not far off (40 out of 100). “My inkling would be that there are even more experiencing the other types of harassment, so it’s probably even a bigger problem than this study gets at,” Dionisi says.

According to Dionisi, “gender harassment” is more common than sexualized forms of harassment and carries the purpose of imposing power over another person: “It would be verbal or non-verbal behaviour that conveys hostile or degrading attitudes, typically about women,” she says, citing ‘sweetie’ or ‘honey’ as phrases commonly used on women. The results of the poll, Dionisi adds, reveal the degree to which women feel they are supported at work. “It’s striking and it really speaks to the importance of making sure that women are feeling supported—that there are formal and informal channels that women can draw on to get advice and support.”