He was a born fisherman and a relentless Mr. Fix-it; on board the shrimp trawler, he took care of everything 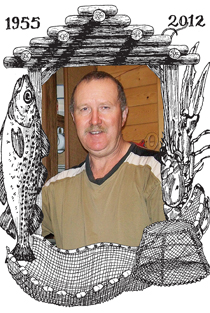 Harris Gange was born on Jan. 15, 1955, in Anchor Point, a fishing village of fewer than 400 people on the windswept northwest coast of Newfoundland’s Great Northern Peninsula. Harris was the youngest of eight children of Gladys, a homemaker, and her husband, Samuel, a fisherman. Growing up in a fishing family, the Gange children were taught early on to work the twines and knits of the family’s cod traps, but Harris was the kind of kid who also liked to fiddle with motors and other equipment. As young as 10, he took apart a transistor radio “just to see how it worked,” says his brother Wallace.

At Canon Richards High School, in nearby Flowers Cove, Harris used to sit quietly in the back row of the classroom with his buddies from Anchor Point, Jacob and Ernest. Har, as he came to be called, was such a shy boy that he was too ashamed to put his hand up in class. By the time he finished high school in the early ’70s, Harris was a full-time fisherman living off the Gulf of St. Lawrence’s abundant cod fisheries.

It was around this time that Harris started dating a girl named Jessie from a nearby community. After three years of dating, Jessie got pregnant. She was just 17. “They were all supportive. They vouched for us,” says Jessie of her family, with whom she kept living even after their daughter Nina was born.

For the next nine years, Harris spent most of his time in the ocean fishing while living between his parents’ place and Jessie’s family’s home. It was only in the summer of 1984, after Harris finished building a house for them with his own hands, that the two finally got married. By then, and for the rest of his life, Harris doubled as a fisherman and the solicitous friend who used his skills to help anyone fix anything, from snow blowers to furnaces, chainsaws to boat engines. “That’s what he enjoyed doing,” says Jessie. Known as a patient, quiet guy, Harris never promised more than he could deliver, “though he’d eventually fix anything that came his way. His trademark answer for people asking for help with their stuff was ‘I’ll take a look.’ ”

Four years after Harris and Jessie’s second child was born, a boy they named Tristan, came the 1992 moratorium on cod fishing. All of Harris’s brothers quit fishing after that, but he decided to join his wife’s brother, Ralford Toope, who had a shrimp quota and a boat. In the 20 years they fished for shrimp together, the two shared many good times, but some scary ones, too. “But it didn’t matter how big the trouble was. The gear, the motor—Har always knew what to do,” says Ralford. He recalls a serious storm five years ago, when they lost their boat’s stabilizer more than 60 km out in the Atlantic, and Harris hoisted it up with ropes to bring them safely to a dock in St. Anthony on the northern tip of Newfoundland.

Whenever he wasn’t fishing, Harris enjoyed spending time with his family and friends at the wood cabin he built from the ground up. He cut down all the trees himself, sawed the lumber, sanded and varnished, made floors, counters, everything. Even if he was the quiet, self-reliant troubleshooter, Harris wasn’t a man without a sense of humour. He always wore a grin on his face. Once at the dinner table, his future son-in-law asked for Nina’s hand in marriage. Harris and the man were good friends, but after the obligatory request, Harris gave the candidate a serious look and shot back, deadpan, “I don’t know.” There was also the time he made a video on his smartphone of his sister-in-law Audrey dancing and singing when she was tipsy at the cabin. He showed it to everyone but her, laughing every time.

Out at sea, Harris was the deck boss of the Krista Kaye, his brother-in-law’s red and black, 21-m shrimp dragger boat. On board, he practically “took care of everything,” says Ralford. “Motors, hydraulics, mechanics, you name it.” According to Wallace, “He was a geek in the fishing industry. There’s no doubt about that.”

On May 7, Harris, Ralford and two other fishermen boarded the Krista Kaye on her first fishing trip of the 2012 season. The weather was good, and the ocean was as flat as it gets. About eight kilometres off the coast, the four fishermen were going about their business. Harris was on deck, where he always was, when a massive container weighing close to 7,000 lb. fell on him, killing him instantly. He was 57.