107-year-old shares secret to longevity: 'Be nice to everybody' 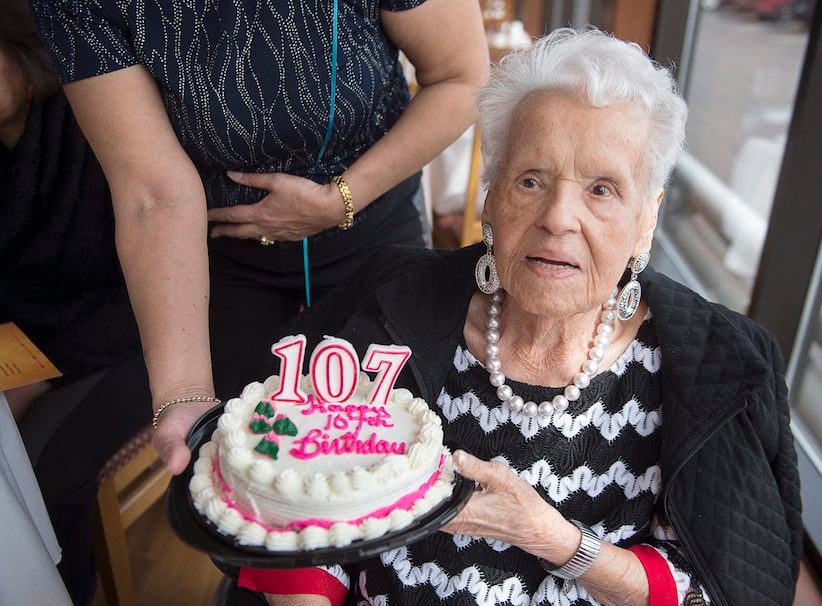 TRURO, N.S. — Jeanette Brown’s pink and white cake was much too small to accommodate the right number of candles for her milestone birthday.

Brown celebrated her 107th birthday on Thursday surrounded by family and friends at a restaurant in her hometown of Truro, N.S.

Neatly dressed in a black and white shirt with red cuffs, a pearl necklace and sparkly earrings, Brown said in a resounding voice that the key to a long and happy life is being good to others.

Brown, who beat cancer in her early 90s, was married at age 16 and had three children before she was 20 years old. She outlived all of her children.

She worked at an ammunition factory in Montreal during the Second World War and received her high school diploma at age 63.

Brown talked to The Canadian Press about her long life during her birthday lunch with family and friends, some of whom travelled from Boston for the occasion.

What is the secret to living a long life?

Be nice to everybody because you want them to be nice to you. Give them a compliment when they need it. Tell them what you’re like and what they’re like. I think that’s the secret for anybody _ to like one another. And all over the world, not just where you’re living, all over the world. That’s the secret I think to everything. Be nice to everybody and expect them to be nice to you. And it works. It worked for me.

What world events have had an impact on you over the last century?

When the first black president was elected, I was very happy. I knew that one day, we would have something good, and that was good. There are things that are happening in the world, new things that are happening and the good things that are happening, it’s for the people. And not just for the rich people, but for the poor people, and especially for my people, who are black. It made me very happy. But there’s more that could be done, and we should look at it like that and help to do it. Not wait for the other fella to do it _ you do it too. I think that’s what makes a good life, helping others. I met a lot of nice people, and I met a lot of bad people. But that’s life.

Tell me a bit about your life.

I was married when I was 16. I had my first baby when I was 17 and I had two more — three children — and that was enough. That was a baby every year, and that’s not good (everyone laughs). Today they just have the babies and they go on about their business. They didn’t do that in my day. When you got pregnant in my day, the man married you and you had a happy life. I was 63 when I got my high school diploma because I couldn’t get it when I was younger, but I was determined that I was going to get it. I took it by correspondence and I had to pay for it, but I didn’t mind that. I wanted it, and I got it.

Any advice for others hoping to live 107 years?

Keep your bad news to yourself and the good news to everybody else. I think that makes a pretty happy life.