The vital link between your immune system and brain health

Michal Schwartz, who pioneered the field of neuroimmunology, makes links between immune-system health and Alzheimer’s 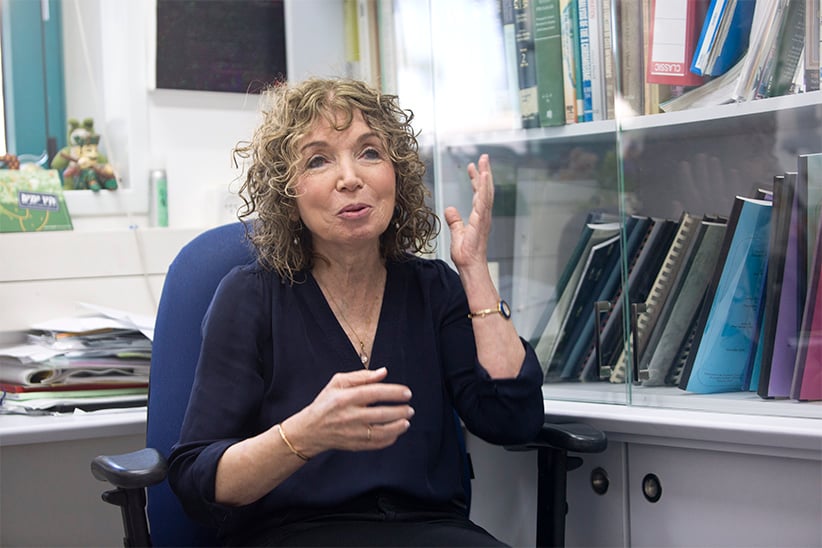 Portrait of Michal Schwartz in her office at the Weizmann Institute, in the city of Rehovot. (Photograph by Kobi Wolf )

Scientist Michal Schwartz, a professor of neuroimmunology at the Weizmann Institute of Science in Rehovot, Israel, is a medical maverick; her research pioneered the field of neuroimmunology, establishing the vital role played by the immune system in brain health and repair. Her 2016 book, Neuroimmunity: A New Science That Will Revolutionize How We Keep our Brains Healthy and Young (with Anat London), explains how a “healthy mind depends on a healthy immune system” and how her team’s research could help improve treatment for Alzheimer’s, dementia, spinal cord injuries, depression and glaucoma.

Q: In Neuroimmunity, you write that our immune systems determine who we are. What do you mean?

A: We think of who we are in terms of personality, past experience, genetics and environmental factors, all of which determine whether we are intelligent, if we are happy, if we are sad. But our immune system is the key factor that keeps the brain in shape, that helps the brain recover from trauma and returns it to homeostasis.

Q: For decades you single-handedly challenged dogma that the immune system is distinct from the central nervous system [the brain, spinal cord and neural retina]. The brain was believed to be “immune-privileged”—the only organ not aided by the immune system. What led you to travel a contrarian path?

A: It’s simple and complicated. My background is basic science—chemistry, physics, mathematics. Then I did my Ph.D. in immunology. My post-doctoral work was in neurosciences; I was working on nerve regeneration. We know every tissue of the body can repair itself with the assistance of the immune system. It didn’t make sense to me that the brain, the one tissue that is indispensable, non-redundant and so fragile, had lost the ability to benefit from immune-system repair.

Q: Until fairly recently, your work made you subject to criticism, even attack. Why was there such resistance?

A: It’s not unique to me. Scientists go by dogma, and this was completely outside of the dogma that the barrier system should protect the brain from the entry of the immune cell. The community was so convinced that no immune cells were allowed to enter the brain that whenever they sought information under any brain pathology—it was very clear to assume, “Okay, immune cells enter the brain, we should remove them.”

Q: So autoimmune cells in the brain were seen to indicate a problem, not a solution?

A: Right. But resistance to my work also stemmed from the fact that it ran between two established disciplines: immunologists ignored it because they don’t deal with the brain, and neuroscientists don’t understand immunology.

Q: That led you to create the new field of neuroimmunology.

A: Yes. It’s around 25 years old. In the beginning it was dominated by immunologists working on multiple sclerosis. No neuroscientists were in the field. I tried to push it in the other direction, and that’s happening.

Q: How do the brain and the immune system communicate with each other?

A: They don’t speak like other tissues in which blood cells are at the site of pathology. It’s more like remote control. The construct between brain and immune system is through the barrier system—the brain has evolved its own pathways.

Q: In 2015, researchers at the University of Virginia and the University of Helsinki independently made headlines with their discoveries that the brain had a previously undetected “lymphatic” system. How does this fit with your model?

A: It fits very well; the brain is not isolated from circulation. But research into the lymphatic system has been around for several years. We observed similar results but did not pursue it. Jonathan Kipnis [who led the University of Virginia team] was a Ph.D. student in our program. He did very elegant work.

Q: What were breakthrough moments in your research?

A: I’ve had several. In 1998, we found that if you add more macrophages [white blood cells in the immune system formed in response to infection, accumulating damage or dead cells] to an injured spinal cord, the animal walks. The community almost killed me for that. It’s easy to say now that there is a lymphatic system, but can you imagine saying for the first time macrophages are needed for repair?

Q: The next year you established the “theory of protective autoimmunity,” a revolutionary concept.

A: Yes. In 1999, we observed that autoimmune lymphocytes [white blood cells] can have a beneficial role in repair after a serious injury to the central nervous system. Another breakthrough I loved was in 2006: we found neurogenesis and cognition are dependent on T cells. You take young animals and you deprive them of T cells and they are idiots.

Q: Your research indicates the immune system needs to be boosted, not suppressed. Doesn’t that run contrary to the immunosuppressant therapies routinely prescribed for many autoimmune diseases?

A: I’ve told everyone for a while to be careful when prescribing any anti-inflammatory drug for any neurodegenerative disease. They understand, but don’t have an alternative.

Q: You recently co-authored a paper in Nature that found a cancer drug showed huge promise for Alzheimer’s.

A: Immunotherapy in cancer is more accepted and is going to be the prevailing treatment. I wrote a theoretical argument in 2008 comparing Alzheimer’s to cancer. I said we need immunity in the brain to fight the pathology. We found the choroid plexus is one of the interfaces where the immune system can talk to the brain, and that this is critical to help repair. [In 2013], a paper in published in Science showed this interface doesn’t work properly in aging. We went to check Alzheimer’s and found the communication between brain and immune system is completely shut off due to deficiency in cytokine, which is needed for activity of this interface. That led me to think that in Alzheimer’s, the brain escapes from immune help more than normal. Our research showed that if we reduced immune suppression, we activated the gateway to recovery from Alzheimer’s. The Nature paper shows that the best drug in the market for cancer, the immune checkpoint PD1, is extremely effective in Alzheimer’s. This is a breakthrough.

A: [Laughs] I wish I had done this. To sleep well, to rest, to eat well, to exercise, to meditate, to train your brain, to maintain social contacts and to try to avoid stressful conditions. This is preventative.

Q: Yet too much exercise is dangerous?

A: Yes, because you can enter into a stressful condition that elevates cortisol steroids—that suppresses the immune system.

Q: You also write of how “immune cells of wisdom” can mimic the effects of Prozac.

Q: Your book discusses how protective parents who shield children from everyday difficulties can impede development of their immune systems, leading to “mentally fragile” kids.

A: Exposing children to limited stress builds the immune system; it’s like exposing kids to bacteria so they become immune.

Q: Your research also indicates that the immune system is “gendered”—different in men and women.

A: Before menopause, progesterone and estrogen affect women’s immune systems; inductive immunity in females is more active, which is why the prevalence of autoimmune disease is higher in females between 20 and 40 than in males. Testosterone can be inhibitory to the immune system; estrogen is stimulative.

Q: Is there still resistance to your work in the medical mainstream?

A: Mostly not. Papers of mine that were once ignored are now being cited thousands of times. That said, neuroimmunology is still not a big field.

Q: Why did you write a book for a mass audience?

A: I was invited to give a lecture in Jerusalem with psychologists, clinicians and historians to speak about memory from different angles. I explained the correlation between cognitive memory and immunological memory. Someone in the audience asked me if there was anything intelligent lay people could read on the subject. I said, “No.” And that was the beginning.