A made-in-Canada Ebola vaccine has been shown to work. Now what? 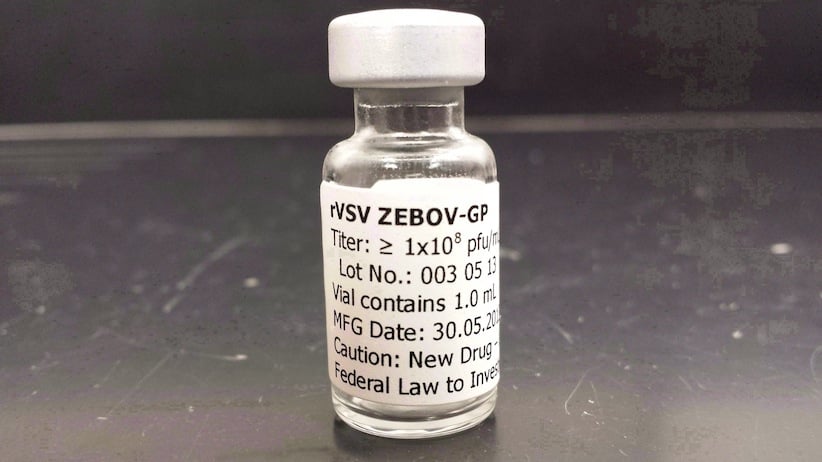 A vial of the Canadian-made Ebola vaccine rVSV-ZEBOV, is pictured in a recent photo. THE CANADIAN PRESS/HO, Walter Reed Army Institute of Research – Col. Shon Remich

TORONTO – A team of international researchers has reported an Ebola vaccine developed at Canada’s National Microbiology Laboratory in Winnipeg works.

In a study in Guinea, the vaccine protected 100 per cent of the people who got it from infection with the deadly virus.

The world has been waiting for years for an effective Ebola vaccine and this is a huge step in that direction. But there are still many unanswered questions. Here are a few:

1. How long will the vaccine’s protection last?

The trial shows this vaccine — currently called rVSV-ZEBOV — is likely going to be very useful as a tool to snuff out outbreaks. That is exactly what the scientists who invented it intended.

Only one dose of vaccine is needed and protection kicks in fast, within about six days. Those are two great characteristics when you are trying to stop spread of a deadly virus.

But no one yet knows how long that protection will last. Some of the people who were vaccinated will have to be followed for years to see whether and how soon their immunity starts to wear off.

2. What does this mean to the other Ebola vaccines in development?

Most vaccines target diseases that are common. They cost hundreds of millions of dollars to develop, but the expense is recouped through ongoing annual sales.

That won’t be the situation with an Ebola vaccine. Despite the massive West African outbreak, Ebola is a rare disease. At this point no country would consider vaccinating all its children against Ebola, for example. It wouldn’t make economic sense.

So while there are quite a few other experimental Ebola vaccines at various stages of development the reality is most of them won’t make it over the finish line.

3. Is there room for any other Ebola vaccines, then?

Sure. The working assumption is that some of the other candidates might provide longer lasting protection, though they will need to be given in several doses over a period of months.

That kind of delivery strategy doesn’t work well for outbreak control. But it could be really useful to protect health-care workers in places where Ebola crops up from time to time, like the Democratic Republic of Congo.

Africa doesn’t have enough health-care workers and Ebola outbreaks take a heavy toll on them. Providing long-term protection to the people on the Ebola front line would be a huge accomplishment.

4. Can this vaccine be used to stop all future Ebola outbreaks?

Probably not. There are five known strains of Ebola, three of which have caused large outbreaks in people. This vaccine protects against Ebola Zaire.

Also, a vaccine against Marburg virus — a related and equally deadly virus — is in the works using the same vaccine design.

5. Will this vaccine help to finally end the lingering West African outbreak?

That’s a definite possibility. The trial in Guinea will now offer vaccine to contacts of any new Ebola cases, which should help stop transmission there.

And if they haven’t already started, talks will soon be underway with the government of Sierra Leone to see if they want to use ring vaccination in that country. At the moment Guinea and Sierra Leone are the only two countries recording cases of Ebola.