The problem? Too little exercise and too much screen time 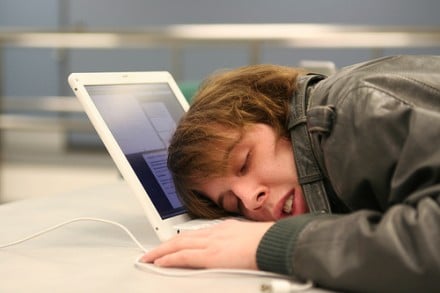 TORONTO — Almost a third of Canadian school-aged kids are sleep-deprived while most are spending too much time staring at screens, suggests an annual report on the state of children’s health.

For the first time, the ParticipAction Report Card on Physical Activity for Children and Youth looked at the amount and quality of children’s sleep, and found that many are not getting enough shut-eye.

The problem seems to be too little exercise and too much screen time — a double whammy that means kids “aren’t moving enough to be tired, and they may also be too tired to move,” according to the study.

Related from Today’s Parent: Kids are getting a D-minus in physical activity

“Because of screens in their bedroom, because of holding their cellphone under their pillow, because they didn’t move very much in that day and frankly are not fatigued, (kids) get a disrupted night’s sleep,” says Dr. Mark Tremblay, lead researcher for the ParticipAction Report Card.

“(They) wake up somewhat fatigued, withdraw from physical activity a little bit the next day, slouch around more and then of course are not physically tired the next night. They have another bad night’s sleep, and so on.”

For the fourth year in a row, the report card handed out a D- for overall physical activity, based on findings that only nine per cent of kids aged five to 17 get the recommended minimum of 60 minutes of “heart-pumping activity” a day.

The worst grade was an F for sedentary behaviour, with only 24 per cent of five- to 17-year-olds coming under the recommended daily maximum of two hours of recreational screen time. High school students spent an average of 8.2 hours in front of a screen, according to the report.

Kids did get a relatively high grade for sleep, earning a B, even though about one in three aren’t getting enough rest. Tremblay says he suspects the grade should be much lower, since sleep data was provided by parents instead of being determined by an objective monitoring device.

Tremblay, also director of an obesity research group at the Children’s Hospital of Eastern Ontario Research Institute in Ottawa, says the effects of chronic sleep loss can be devastating, since it is linked to higher rates of depression and suicidal thoughts. Too little sleep can also cause hyperactivity, obesity and difficulty in problem solving.

“I don’t know the circumstances in Woodstock but we deal with these at the hospital in Ottawa here…. It seems to me highly unlikely that they are unrelated to a disconnect with nature, the outdoors, society, movement, good sleep and an excessive connection with flashing screens, with how many ‘thumbs up’ in your Facebook page and these sorts of things.”

For the first time, this year’s report card analyses the whole day, and that provides a clearer picture of healthy activity, says ParticipAction president Elio Antunes.

A child who meets their minimum daily exercise goals can still be unhealthy if they also dive into a TV marathon or play video games into the wee hours of the morning, say the researchers.

The ParticipAction report card, which synthesizes data from multiple sources including peer-reviewed research, will shift to a bi-annual release, with the next report coming in 2018.