An alcoholic therapist's search for an evidence-based treatment

Alcoholism nearly killed therapist Michael Pond. Now, he's looking for answers on why substance-abuse treatment can be so hard to find. 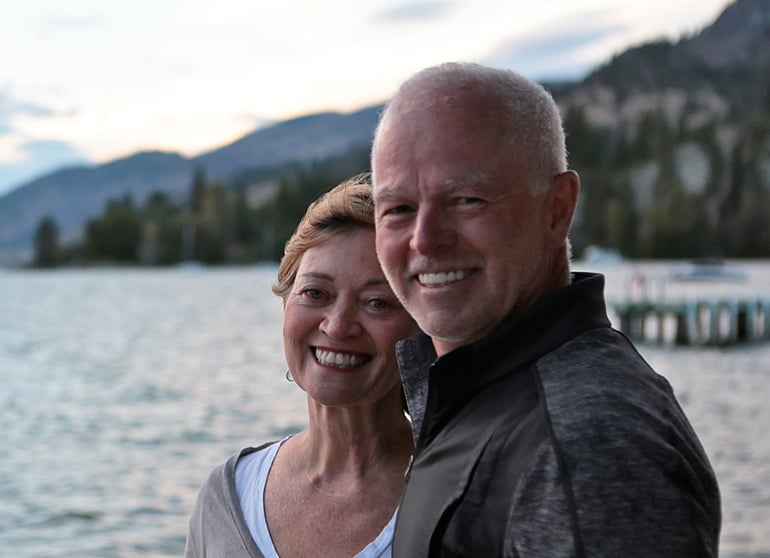 Michael Pond is a Vancouver psychotherapist who lost his practice and his family after alcoholism took a hold of his life and nearly killed him. Despite many unsuccessful attempts at sobriety, Pond eventually succeeded. Soon after, he met Maureen Palmer, a documentarian who became his partner. Together, they are telling Pond’s story of addiction through a new book and film to raise awareness about evidence-based treatment options that exist for substance abusers and their families—but which aren’t always easily accessed in Canada. Wasted: An Alcoholic Therapist’s Fight for Recovery in a Flawed Treatment System was released today; a companion film will air on Thursday on CBC’s The Nature of Things. They pair have also co-launched AddictionTheNextStep.com to spread their message.

Q: What motivated you to put your story out there?

Pond: I was a professional for many years, and I would refer people to treatment centres and recovery houses all the time. When I ended up in them, two of the worst, I realized that’s where most people wind up—young people, and people suffering from mental illness, eating garbage for food basically, and treatment was a ride to the next AA [Alcoholics Anonymous] meeting. When I got sober, I was saying, “Somebody’s got to do something about this.”

Q: You bounced from treatment facilities, the streets, psych wards and recovery houses. Is there a common theme about how you were treated, or how they failed to treat you?

Pond: I don’t like to focus on the negative because I want to practice what I preach. But the common thread was the shaming, and the lack of kindness and science. Even in facilities like hospitals, clinics, doctor’s offices, ER—they’re all professionals, they’re all educated, they’re all wonderful people, but probably they are worn out, exhausted. I know, I’ve worked in all of those facilities. And there’s still the stigma. My ex-wife talks in the film about how hard it was for her to take me to ER because she could see them murmuring.

Q: AA is synonymous with alcohol addiction treatment but Mike, you say it didn’t work for you. Why doesn’t AA work for everyone?

Pond: My personal experience with it was bad, but I met some amazing people in the program. They saved my life. When I was on my last big bender, it was the guys from AA who would come and check on me. I was in the hospital for 29 days. The only people who visited me were AA people. So I’m not here to bash AA. That’s not what this is about. This is about the treatment industry, where you pay up to $100,000 to go to a place and have equine therapy, and then have a 12-step meeting or two, and maybe get one counselling session a week with somebody who is not qualified. So AA started 80 years ago, 1935—there’s been a lot of changes in the world, and in science and medicine since then.

Palmer: Dr. Bill Miller is in the film and a world-renowned expert on AA. You know the notion of having to admit you’re powerless? Generally speaking, when AA was first invented it was a white male population. Dr. Miller says there’s a whole group of people in our society who already feel disenfranchised. Admitting your powerlessness is going to make you feel worse. The idea of spirituality—and to be fair to AA, it says a God of your own understanding—that’s a turn-off for a lot of people. As much as the original intent of AA was not shame or blame, if you go to some meetings, it is quite prevalent.

Q: So you set out on this search for evidence-based addiction treatment. What do you mean by that?

Palmer: If you look at any other illnesses where people get severely ill and die, they get evidence-based medicine—you get chemo or radiation because there’s lots of science that says it works. Both the Canadian Medical Association and the American Medical Association decree that this is a disease. There are enlightened groups, including here at St. Paul’s Hospital in Vancouver and the Centre for Addiction and Mental Health in Toronto, where they now say we have to give the same level of compassion and care, and that means evidence-based: “Is this scientifically proven to work?”

Q: I think a lot of people would be surprised to learn of an injectable drug that, Mike, you’ve received to treat alcoholism. It curbs cravings. I gather that the injectable drug Vivitrol isn’t approved for use in Canada?

Pond: Right. It is a chemical medication, a 30-day injectable with a delayed or long-term effect. It’s powerful.

Q: Can you describe your experience?

Pond: When I had the first relapse I got the first injection in Bellingham, Wash. It’s right across the border. That was Feb. 9, 2015. I relapsed after a motorcycle accident. When I got that injection, I knew within half an hour it was taking effect. I could feel the agitation go down, this calming effect, and cravings were completely gone. It was remarkable. That was the best thousand bucks we ever spent. So I’ve gone down five times or six.

Palmer: Mike went down for five months. What this drug is supposed to do it apparently did for Mike, which is build up a critical mass in your system so that he doesn’t require it anymore. It is part of a drug trial now at St. Paul’s Hospital.

Q: Do you continue to use it, Mike?

Pond: I don’t go for the injectable. But I can tell when I’m struggling. I know the precursors to a recurrence [and] I’ll take a Naltrexone pill. That’s Vivitrol in oral [form, which is approved for use in Canada].

Q: Does it seem to have the same effect on you?

Pond: It’s more unsettling because you’re getting that one pill and it’s going to last for 24 hours. I get a little bit [of] nausea but it does immediately take away any craving.

Q: What is the pill version that’s approved for use in Canada used for?

Palmer: Here’s the core of the problem in Canada. Dr. Evan Wood, who you see in the film, explains that probably less than 10 per cent, probably closer to one per cent, of Canadians battling substance abuse get Naltrexone or any other approved medication.

Q: So besides this drug, did you discover other things in the evidence-based category?

Pond: Motivational interviewing, community reinforcement and family training (CRAFT), I use it all the time now in my work. That’s for the loved ones. Behavioural couples therapy is very effective. This is a systemic problem. With CRAFT you start off excluding the substance user. You work just with the family, empower them, and give them different ways of coping.

Q: Mike, your father and grandfather struggled with alcoholism. What have you learned about how that has shaped you, psychologically and genetically?

Pond: It’s both. Looking back, I remember what my dad’s father was like: he was a risk taker. He was renowned for the crazy things he would do. My dad was the same, very impulsive. So there are these genetic traits that I definitely inherited and predisposed me to substance misuse.

Palmer: The experts said that 60 per cent of addiction is genetic-based.

Q: Mike, you have three sons, you’re rebuilding relationships now. Do you think about how family history might affect them?

Pond: I think about it, and we talk about it, but no so much. They went through so much trauma themselves and hardship. Before the drinking got bad our family was pretty wonderful. It didn’t get bad until my oldest was about 14 and my youngest was nine. So they lost somebody that they really loved. That made it that much worse for them. Now, you see the healing in them. In terms of worrying about them ending up the way I did, I don’t worry about it, that’s not the word; I have some concern. But I have optimism.

Q: What’s your message to people with addictions, to the families, doctors?

Pond: The main message is the system has to change. Our doctors have to be trained and educated about this problem. And there is hope. I don’t even use the word hopeless anymore. I don’t care who it is and how severe the problem. There’s always hope.

Palmer: Underscored in that message is that there’s an expanded toolkit to treat this problem. AA works for millions; it doesn’t work for everybody. There are a lot of other things that do and we need to get the word out.

Q: Mike, what do you hope for?

Pond: I hope that my sons will have a wonderful, happy, fulfilling, flourishing life. And also, that we can be a part of helping change this system that is flawed.