'I wanted other women at risk to know about the options,' actress says 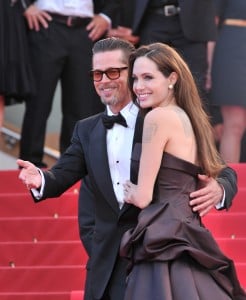 LONDON — Oscar-winning actress Angelina Jolie revealed Tuesday that she has undergone more preventive surgery, having her ovaries and fallopian tubes removed in hopes of reducing her risk of cancer.

Writing in the New York Times, the filmmaker and philanthropist said that a recent blood test showed a possible early sign of cancer. The news came as a blow to the star, as she has already had a double mastectomy.

“I went through what I imagine thousands of other women have felt,” she wrote. “I told myself to stay calm, to be strong, and that I had no reason to think I wouldn’t live to see my children grow up and to meet my grandchildren.”

Jolie, 39, revealed two years ago that she carries a defective breast cancer gene that puts her at high risk of developing breast and ovarian cancer. Her mother died of ovarian cancer, and her maternal grandmother also had ovarian cancer —strong evidence of an inherited, genetic risk that led the actress to have her healthy breasts removed to try to avoid the same fate.

Only a small percentage of women inherit the same faulty gene as Jolie, known as BRCA1 — the name stands for breast cancer susceptibility gene. These mutations are most commonly found in women of Eastern European Jewish descent, though other groups, including the Norwegian, Dutch and Icelandic, also have slightly higher rates of these mutations.

The average woman has a 12 per cent risk of developing breast cancer sometime during her life. Women who have inherited a faulty BRCA gene are about five times more likely to get breast cancer.

Jolie said that while having the gene mutation alone was not a reason to resort to surgery — other medical options were possible — her family history influenced her decision to have further surgery now. The surgery puts a woman in menopause and Jolie wrote she was researching alternative medicine and hormone replacement treatment.

Her courageous decision to announce her double mastectomy publicly was praised as a watershed moment in efforts to persuade women to get breast cancer screening — and to raise awareness of the need for early detection. The same sense of mission led her to write about her follow-up care.

“I wanted other women at risk to know about the options,” she wrote. “I promised to follow up with any information that could be useful, including about my next preventive surgery, the removal of my ovaries and fallopian tubes.”

Jolie’s article makes plain the anguish the results of the new blood tests brought. She said she immediately called her husband, the actor Brad Pitt, who flew home from France within hours.

“The beautiful thing about such moments in life is that there is so much clarity,” she wrote. “You know what you live for and what matters. It is polarizing, and it is peaceful.”