Are we in for another doctor exodus to the U.S.? 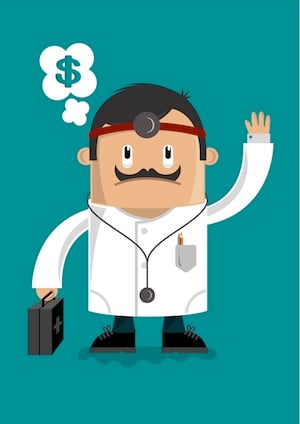 Anyone who has read the news from Canada in the last six months knows that there is a serious labour struggle going on between doctors and governments. In Ontario, the situation has been particularly fraught. Heated negotiations over physician fees—against the backdrop of a $13-billion deficit—have led some of the province’s MDs to warn that, if things don’t change, they’re going to leave for greener pastures.

Radiologists and cardiologists have made public threats, and even idealistic medical students are chiming in. As Stephanie Kenny, of the 2013 class at the University of Ottawa told Science-ish in an email, “The average medical school student today will graduate with $150,000 of debt and will spend 13 years in training after high school before becoming a fully licensed physician.” Though she would “love to practice in Ontario,” she added that “there is a perfect storm brewing that is making this a difficult and unpalatable place to work.”

Now, Ontario Health Minister Deb Matthews says she isn’t buying the chatter. But it’s not that far fetched: Canada has experienced doctor brain drains in the past. In the 1990s, when the government capped spending on physicians, there was a steady trickle of Canadian-trained physicians into the U.S. So Science-ish wondered, based on the data we have about the MD workforce, are we poised for a doctor exodus?

Dr. Arthur Sweetman, the Ontario research chair in health human resources at McMaster University, pointed out that where doctors do their residencies is one of the biggest determining factors for where they will practice. To break from that, a number of key conditions need to be in place. Number one is, “If you’re looking to move, it’s not because things are bad here. You’re looking to move to some place where things are better.”

In the 1990s, when Canada lost doctors to the States, compensation here wasn’t competitive with the U.S. That, though, simply isn’t the case now. In fact, doctor salaries in Ontario, even inflation-adjusted, are the highest they have been in 20 years. According to this recent report, “On a per-physician basis, the mean payments to physicians in Ontario, having remained fairly flat between 1992/93 and 2003/04, rose by around $100,000 between 2004/05 and 2009/10 (all unadjusted dollars).” Family doctors saw the greatest pay increase: more than $1.5 billion collectively between 1992/93 and 2009/10. On a per physician basis, that meant salaries rose from less than $200,000 in the early nineties to $300,000 by 2010. Meanwhile, with the U.S. economy stagnating and the future of health care in the country looking uncertain, their hiring climate is not what it used to be, even for health-care administrators.

Another part of the story is that, in the 1990s, there was a physician shortage, and governments in Canada cut medical school enrollment by 10 per cent. The demand for doctors was high. This is also not the case anymore. In fact, the Canadian MD supply is at an all time high. First-year medical school enrollment has almost doubled and data from the Canadian Institute for Health Information shows that the number of doctors practicing in Canada is greater than it ever has been, with 69,699 active physicians (compared to 37,252 in 1980). Of this, Steven Lewis, a Saskatoon-based health-care analyst, said, “Some few (doctors) might get juicy offers with guaranteed incomes, but we’re way beyond the physician supply crunch of the 1990s.”

Lewis also cites demographics as a major reason why we’re unlikely to see doctors leave en masse: “There’s a fairly large middle-aged bulge in the physician supply, and that group is highly unlikely to leave given their community roots and not wanting to have to start over with whole new patient rosters, relationships with facilities, and referral networks,” he wrote in an email. “Even those motivated to move for income reasons have to recognize the transaction costs.”

On the west coast, Dr. Morris Barer, director of UBC’s Centre for Health Services and Policy Research, who has been studying physician flows for decades, also thinks the talk of an exodus is just that—talk. “My sense is that doctors need to be really put off by circumstances before they will actually leave the country.” Even the brain drains of the past weren’t as dire as they were made out to be in the press, Dr. Barer adds, and if you look at the big picture, there have been more physicians coming into this country than leaving overall.

Of course, there are doctors who have fled their homelands for ideological reasons—such as the glut of Brits who immigrated to Canada after the National Health Service was established in 1948. “But major moves of this sort are more frequently associated with being handed great opportunities elsewhere, or being really unhappy about some mix of those circumstances (at home),” he added. There’s nowhere better for Canadian physicians to go right now.

Still, circumstances are always changing. The very fact that we are paying to train so many doctors here may lead to an oversupply (it’s already happening in some specialties), and this could eventually force physicians to go—especially into Barack Obama’s arms if the need for primary-care physicians kicks in with his health bill. Until then, Dr. Barer attributes doctors’ exit threats to the fact that “health policy in this country is often the product of prior public theatre.” In other words, when labour groups aren’t getting what they want behind closed doors, they appeal to the public. For all their vocal complaints, Dr. Barer quipped, “The problem is that doctors have rarely, in the past, managed to secure public sympathy.”