Fat in our favourite foods—including butter and steak—doesn’t just go straight to our hips, it goes first to our brain 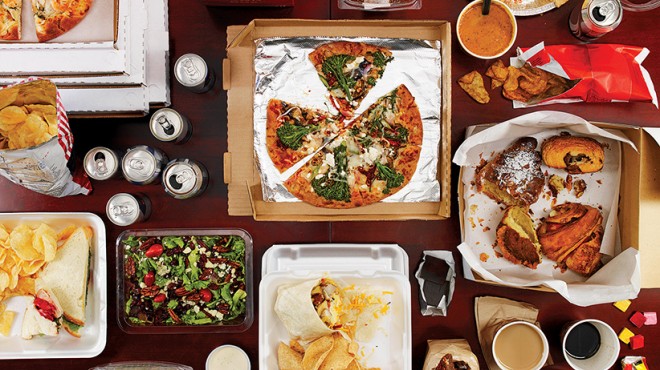 Deborah Clegg, a dietician and internal medicine professor at University of Texas Southwestern Medical Center in Dallas, made a stunning discovery: fat in our favourite foods—including butter and steak—doesn’t just go straight to our hips, it goes first to our brain. That’s problematic because the fat turns off the hormones that are in charge of regulating our food consumption and body weight. “The message,” says Clegg, “would be not to wait for your body to tell you you’re full when you have a meal loaded with fat. Make yourself stop eating. Because the likelihood of your body paying attention to those signals is not very good.”

Clegg’s 2009 study provides a neurological explanation for why we overeat. But it’s only one piece of the puzzle, she acknowledges. Overeating has been blamed on everything from our interactions with friends and family to our genes to an evolutionary glitch. “On every level you can find contributors,” says Caroline Davis, an obesity expert, York University kinesiology prof and researcher for the University Health Network in Toronto. “And I don’t think one is more important than the other.” There is even a push to have compulsive overeating recognized as a brain disorder like drug addiction.

If there is one clear consensus, it’s that overeating is complex—and not always our own fault. “Eating is a behaviour, but it is certainly not something that is 100 per cent under your voluntary control,” says Louis Pérusse, director of kinesiology and professor of social and preventative medicine at Laval University in Quebec City. “It’s more than just, ‘Don’t eat if you’re not hungry.’ ”

That’s obvious in Clegg’s study, published in the September issue of the Journal of Clinical Investigation, which helps explain why we can’t resist eating more and more of our favourite fatty foods. Unbeknownst to us, our brain can be hijacked by a saturated fat called palmitic acid, which is in foods from animals, such as beef or cheese. The fat blocks two hormones, insulin and leptin, whose job it is to control our appetite. Clegg and her fellow researchers figured this out by injecting palmitic acid into the brains, stomachs and arteries of rats. (They also injected oleic acid, a monounsaturated or “good fat” like olive oil, which didn’t suppress these hormones.)

In humans, the scenario might go like this, says Clegg: Friday night you overeat foods laced with palmitic acid such as strip loin, a loaded baked potato and cheesecake. Your next few meals include similarly high-fat choices. You step on the scale, and there’s no change, but palmitic acid has begun suppressing your insulin and leptin. “The fats are accumulating in your brain,” says Clegg, so your appetite grows. By Monday morning you’re especially hungry, so you eat more than you should. Same on Tuesday and Wednesday. “All of a sudden,” continues Clegg, “your weight starts creeping up.”

In rats, palmitic acid took over their brains within three days. And Clegg says it took a week for the effects to wear off. Right now, it’s unclear how long humans might need to recover, or reach “homeostatis.” Pérusse explains that humans overeat when one of two systems goes wonky. The first is the homeostatic system, which is the metabolic process that prompts us to eat when we need energy, and tells us to stop when we’ve refuelled. The other, called the “hedonic system,” relates to how we respond to external food cues—smell, sight or sounds. Pérusse calls this the “emotional brain,” and says it’s increasingly linked to overeating and obesity.

“At the core of our ability to control our eating lies the emotional centre of our brain,” adds David Kessler, former commissioner of the U.S. Food and Drug Administration and author of a new book, The End of Overeating. “Sugar, fat and salt, especially when eaten in combination, have the ability to stimulate, arouse—they capture your attention.” Every time we derive pleasure from eating, a positive memory is created, he told Maclean’s. “So if in the past you reached for that chocolate chip cookie when you were stressed, you’re going to automatically have a habit to reach for it” next time the going gets tough.

There may be another, historical explanation for why we overeat, says Davis: it’s programmed inside us. As “humans we evolved to eat beyond our caloric needs because we have always been uncertain of our food resources—they’ve been intermittent or seasonal,” she explains. Palmitic acid’s ability to suppress appetite-regulating hormones may have been helpful when our ancestors needed to consume as much of a hunted bear as possible before it spoiled, suggests Clegg. What’s more, we evolved to prefer sugar because it signalled to us that a plant, for example, wasn’t poisonous, says Davis. In other words, we may eat more than we need, especially sugar, because we haven’t yet shed these ancient survival mechanisms.

That our eating traits get passed down to us is the focus of Pérusse’s work looking at the genetic causes of overeating. He estimates that between 20 and 50 per cent of the way we eat is inherited. Pérusse and his colleagues identified a gene in the brain that is related to disinhibition, which occurs when a person experiences a loss of control when faced with food. It’s an exciting discovery because disinhibition is a good predictor of weight gain. Find the gene, and you’ll be able to detect who is most at risk of overeating. Pérusse is hopeful that in the future testing will be done to identify people who are most susceptible to overeating because of the gene.

If, at most, half of the way we eat comes from our family genes, the other big factor is environmental, says Pérusse. Overweight friends can serve as “permission givers” to overeat, according to research in the American Journal of Clinical Nutrition. Youths aged nine to 15 were left in a room with food, and told they could eat as much as they wanted. Friends ate more together than non-friends, regardless of their weights. Who ate the most? Overweight kids with other overweight kids, even if they didn’t know each other. This is in keeping with other research showing adults eat more among friends and family than strangers. The good news is that social interactions can also help people lose weight. A recent study in the Journal of Consumer Research concluded that Weight Watchers’ weekly group meetings are “spiritual and therapeutic.”

There is a growing appreciation for just how hard it is not to overeat, says Davis. She and a colleague published a review of the science on compulsive overeating in the May issue of the journal Appetite, and recommended it be considered an addiction disorder similar to substance dependence. She says there is “compelling” evidence in animals that sugar is addictive, and that “it works on our brain in a very similar way that the opiates do, like heroin or morphine.” Basically, our reward pathways are activated, and that gives us a boost, which is pleasurable.

The push to see compulsive overeating recognized as an addiction is gaining speed. In 2008 there were 15 academic papers on the topic compared to just six between 1950 and 1970, Davis noted in her study. It’s likely that skyrocketing obesity rates have partly fuelled the need to take overeating more seriously. “If it’s not a disorder, then it doesn’t have to be treated,” says Davis. “But I think most would agree that compulsive eating, because of its high correlation with obesity, is not a desirable state.”

Kessler says that individuals need to make private rules—for him, it’s no french fries. But he acknowledges that restricting ourselves too much can backfire. “The power of food comes not just from the taste but from the anticipation.” Temptation, it seems, is sweet.