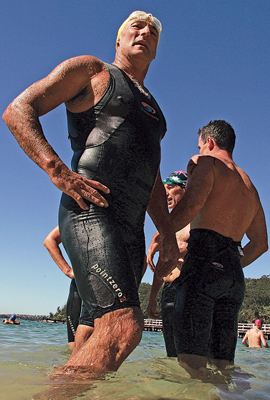 The day that Gordon Ritchie turned 57, he showed up at his orthopaedic surgeon’s office in Calgary for arthroscopic surgery on his right knee, which had been banged up after years of playing sports. It was an unusual way to celebrate his birthday, but for Ritchie, an investment banker and avid cyclist, golfer and skier, the surgery was the best way to usher in a new year of pushing his body to the limit. “It was,” he says, “a wonderful birthday present.” Within weeks, Ritchie began planning his next helicopter-skiing trip.

Ritchie represents a growing phenomenon among baby boomers, those individuals born between 1946 and 1964. For the first time, middle-aged people and those approaching retirement are more fit and physically active than ever—and they’re putting in massive amounts of money, time and effort to keep it that way for as long as possible. “I see quite a few soccer players, skiers, runners, tennis players, curlers, just about everything,” says Dr. Cy Frank, president of the Canadian Orthopaedic Association, referring to his high-performance boomer patients. He’s also treating more of them—including Ritchie, who rearranged his schedule to have surgery in a hurry. “Dr. Frank is going to keep me going,” says Ritchie. “His goal is to get two or three more years out of these knees before I have a replacement.”

Such enthusiastic fitness goals were unheard of a generation ago, when few people in their 50s and 60s would have worked out at such a high level, or expected so much out of their aging bodies. “We’ve dispelled this myth that as you get older you can’t participate in exercise-type activities,” says Liza Stathokostas, a researcher at the Canadian Centre for Activity and Aging in London, Ont. Now, “there’s no question that you can, and you should.”

This new reality has given way to a medical trend that orthopaedic surgeons and exercise specialists have dubbed “boomeritis.” The term, first coined by American Dr. Nicholas DiNubile in 1999, refers to injuries sustained among ambitious older adults who fervently participate in competitive sports, adventure travel and other physically demanding activities. The Mayo Clinic describes boomeritis as “the Achilles’ heel of a fit generation” in its March newsletter.

“As we get older, our body changes,” says Dr. Edward Laskowski, co-director of the Mayo Clinic Sports Medicine Center in Rochester, Minn., even though “our mind might not feel any different.” As the years pile on, everyone is more vulnerable to getting hurt because cartilage softens with age, says Dr. Frank. What’s more, “we lose about 10 per cent of lean muscle per decade after age 30,” adds Laskowski. As a result, doctors are seeing more overuse or repetitive stress injuries such as tendinitis, bursitis, tendon tears or fatigue fractures.

The good news is that boomeritis is preventable. Laskowski says one of the main ways to offset the body erosion that comes with age is strength training, which rebuilds atrophied muscles. A bonus is that having muscles also burns calories. Improving flexibility and range of motion is important to avoiding “tissue micro-trauma” that is the hallmark of overuse injury, continues Laskowski. Frank suggests replacing high-impact activities such as running and jumping with more joint-friendly sports such as biking and swimming. Ritchie, for one, had to give up squash and hockey 10 years ago, but he says, “I would still love to do those things.”

Medical experts agree that despite the risk of boomeritis, high levels of fitness should be everyone’s goal. “I wouldn’t want people to be deterred from exercising because they think they’re going to develop an injury or condition,” says Stathokostas. “You just have to take measures to exercise safely and properly.” Even for people who have suffered boomeritis, Frank says that’s no reason to stop moving. “I always encourage people to get back out there because I think it is better for them psychologically and physically.”

For Edna Levitt, 70, there is one rule to avoiding boomeritis: “Listen to your body.” Five years ago, the Toronto resident became a certified personal trainer catering to the over-50 population. “I don’t do anything that causes any pain. Most of the people who get boomeritis have overdone it. They aren’t aware of their bodies.”

Like it or not, Ritchie is aware of his body—in particular his knees, and what they are capable of bearing these days. “I wear knee braces now,” he says, and “I probably get a little more sleep before [a sports] event than I might have when I was 20 or 30 years younger.” Still, Ritchie doesn’t plan on slowing down—he wants to be skiing when he’s 70. “I can still keep up,” Ritchie muses. “I’d like to shoot my age at golf someday.”