The dream-like images were commissioned by a PR firm that represents Novartis Canada, makers of a controversial MS drug 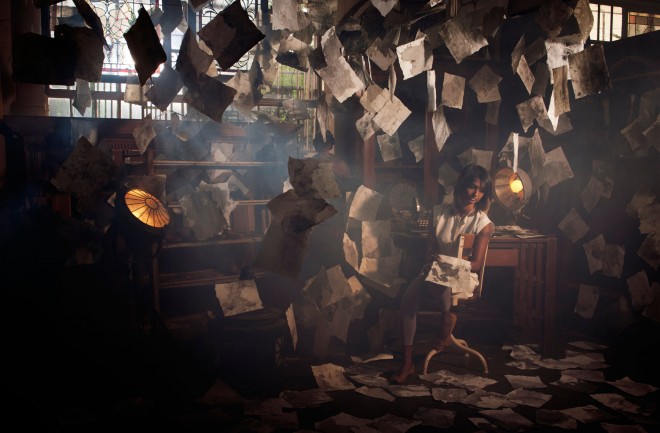 Caitlin Cronenberg is a young photographer who has made a name for herself chronicling fashion and celebrity—as well as the cinematic process of her filmmaker father, David Cronenberg. So a press release issued last week headlined “Caitlin Cronenberg Exposes the Reality of Young Women Living with MS” appeared to signal a bold—even brave–departure for her. Multiple sclerosis, or MS, is a chronic degenerative condition that can lead to paralysis, depression, and blindness. It’s a mysterious condition; progression varies radically; its cause is unknown. Nobody even knows how many Canadians have it: the much-repeated statistic of 50,000 to 75,000 people is out of date, an MS Society of Canada spokesperson told me months ago.

It doesn’t lend to easy imagery. So I wondered: Is Cronenberg now delving into the dark, uncomfortable territory annexed so well by her dad?

But the “reality” that Cronenberg’s one-night exhibit, DREAM/AWAKE, exposes is less about MS than about how a pharmaceutical giant can create buzz amid advertising restrictions—in this case, by linking a fashionable female photographer to a prescription drug targeted at young women. That’s whom multiple sclerosis strikes most—three times more frequently than men.

Cronenberg was hired for the gig a few months ago by Weber Shandwick, the PR firm that represents Novartis Canada, a sub of the US $46-billion Swiss pharmaceutical giant Novartis AG. “They told me they came up with the idea for the installation with me in mind,” Cronenberg told me in a telephone interview. She was flattered.  She also has family friends afflicted with MS, she says. A former neighbour she’s fond of is now wheelchair-bound.

Cronenberg was given “total artistic freedom” on the project, she says, although the client provided three women to be photographed, all of whom were diagnosed with MS in their 20s or 30s, when the condition often strikes. Rebecca Webster of Weber Shandwick explains the women were chosen after they were “nominated by their treating neurologists who felt strongly that this project was important to raise awareness about MS, especially among women.”

The three had had success taking Novartis’s Gilenya, a $31,000-a-year oral MS pill approved by Health Canada in March 2011 (until then, MS drugs had to be injected). Gilenya isn’t explicitly mentioned in the press release. But as it happens, one of the women, Himani Ediriweera participated in Gilenya’s clinical trials and was quoted enthusing about the drug in a 2011 press release. 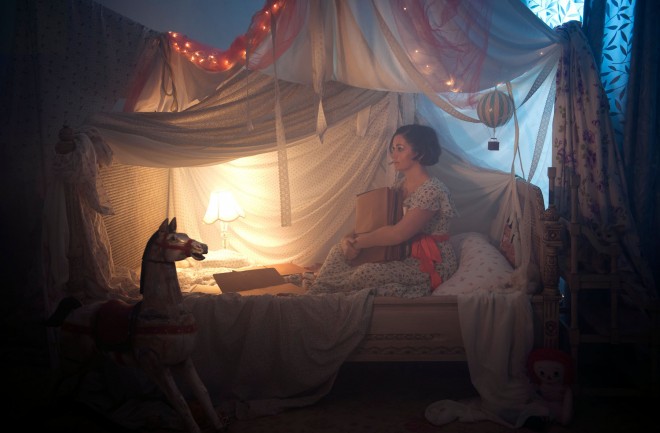 Cronenberg says she based 12 photographs on the women’s stories. The resulting staged tableaux exude a dreamy, unworldly vibe that make no reference to illness—one woman appears to be in a childhood bedroom; another stands next to a red BMW and a toy sailboat; a third is in a shadowy room festooned with pages of paper. The press release describes the photographs in dramatic, yet upbeat terms: “The images demonstrate the feelings of loss—of body, family, opportunity or work–and how each woman has reclaimed her life through treatment and become a figure of inspiration for young women fighting the disease.”

The exhibit of Cronenberg’s photographs was a one-night pop-up event on May 30, “World MS Day,” staged at a Toronto gallery that rents out to corporations wanting to imbue an event with arty patina (Loblaw Companies launched a new packaged food line there last year). Webster describes the affair as “invitation-only for media and influential people.”  Cronenberg donated the work to a silent auction with proceeds going to the MS Society of Canada. “Several thousands of dollars were raised,” says Webster, declining to be more specific.

The show was marketed as bringing “awareness” to MS—and received media attention as a result, including Cronenberg being interviewed on the CBC. The line between “awareness” and “promotion,” however, is fragile, given Health Canada’s strict regulations governing direct-to-consumer advertising of prescription drugs. Regulations allow drug companies to use a brand name but not talk about what a drug does. Direct to consumer information—those public awareness ads on TV discussing a specific condition—has to be balanced and can’t use brand names.

But social networking has created new grey areas. Cronenberg’s photographs themselves contain no branding, no mention of Gilenya or Novartis—though the exhibit and press release mentioned the company and there are now plentiful linkages between Cronenberg, the MS Society of Canada, Novartis and Gilenya exist online. (Health Canada is investigating the exhibit to see “if it was promotional in nature,” a spokeswoman told me.) Where the hopeful claim that “each woman has reclaimed her life though treatment” in art show PR fits into the rigid regulatory equation is new territory.

What also doesn’t have to be mentioned in the press release for the exhibit—because the photographs are technically part of an art exhibit and not a commercial—is “side effects.” And in Gilenya’s case, 84 people died during its worldwide clinical trials, though some of those deaths were not directly linked to the drug. Instances of adverse effects are so high that neurologists must monitor people closely for six hours after the first dose. In February, 2012, Health Canada put Gilenya under review, though the drug still can be prescribed. Concerns were raised after 11 new deaths (a number that has since risen to 15) were linked to it (none were in Canada but there were more than 50 averse-effect reports).

One woman with MS expresses conflicted feelings about the exhibit. “Positive images are a great thing,” says Chrystal Gomes, 46, who was diagnosed with MS when she was 28 and has never taken MS drugs. She “loved” Cronenberg’s pictures but dislikes the drug sponsorship—and the message: It makes me mad,” Gomes says.  It gives the impression that MS patients need drug treatment to reclaim their lives, which is so wrong.”

Cronenberg knows the exhibit isn’t photo-journalism:  “I would never say this is a general statement about MS,” she says. “To look at it, you wouldn’t even think this is about MS. I wanted it to be uplifting.” She knows the subjects influenced content: “I was so lucky because women I was working with had happy endings to their stories; if someone had appeared in a wheelchair, I would have made her story different to make sure it was properly presented.”

Of course, a company selling a MS drug won’t want to be associated with imagery referencing the harrowing truths of the condition. (For a more candid portrayal, see these self-portraits by Patricia Lay-Dorsey.)

The exhibit shows how social networking is reframing the way we see illness and disease—and how drugs may be stealthily marketed. It’s also another reminder of how women remain the primary target of Big Pharma marketing, as discussed in the important book Push to Prescribe. While MS is too complicated a condition to summon the pretty, sanitized “pinkwashing” that now surrounds breast-cancer, the move to frame it as a “women’s” disease portends similar campaigns.

The drug company-doctor network the exhibit reveals is also concerning. That neurologists are providing patients for a Pharma-sponsored “awareness” campaign that doesn’t add one whit of “awareness” should raise red flags—and a passel of questions. 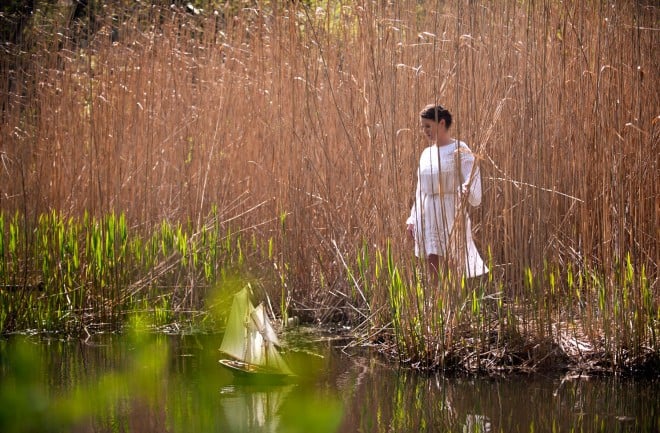