'Can I really get sick from the coronavirus twice?' (and 10 other pandemic questions)

Infectious disease specialist Dr. Ilan Schwartz on sending kids back to class, whether the NHL should play and the 'very bad idea' of catching COVID-19 on purpose 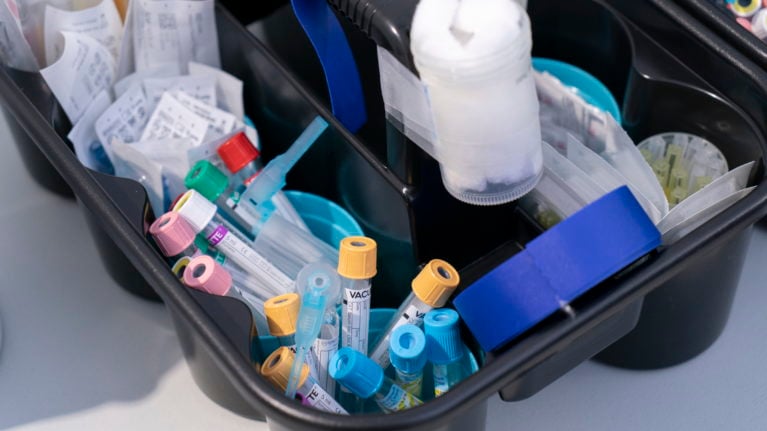 Medical supplies in a temporary addition to the Verdun Hospital in Montreal. (Paul Chiasson/CP)

We are still in the thick of the coronavirus pandemic, six months after the first case of infection was detected. As of this week, the number of cases worldwide has surpassed the three million mark. In Canada, that number has surpassed 50,000, with more than 2,800 deaths due to COVID-19.

As the case-count continues to rise, so does the anxiety about how long social-distancing measures will last. Businesses are itching to reopen, and Quebec has announced plans to bring primary-school children back to class in the next few weeks. Political leaders have been emboldened by the country’s slowing rate of spread. But is it still too soon to relax? What would it take for life to truly go back to normal?

Dr. Ilan Schwartz, an infectious disease specialist at the University of Alberta, helps us answer these questions. He also addresses how our understanding of the coronavirus has changed over time as we learn more about it, and whether it’s wise for sports leagues like the NHL to try resuming their seasons for broadcast only in the near future.

There are reports out of South Korea suggesting that people can get the virus more than once. Does this cast doubt on the idea that getting the virus and recovering from it results in immunity?

People can test positive, then test negative, then test positive again. That doesn’t necessarily mean it’s a reinfection. If it’s in a short time period, a much more likely explanation would be that we’re detecting old genetic material of the virus, and the quality of one of the tests might have been better than the other.

The reports I’ve seen haven’t suggested those individuals have any symptoms or any clinical worsening corresponding with them testing positive again. It just suggests that the tests we have aren’t very good at determining when somebody no longer has the infection.

The most compelling evidence so-far is of an experimental animal model [using primates], where researchers were unable to reinfect the animals when they had previously been infected. Now, what happens in an animal model isn’t always predictive of what actually happens in people. But so far we haven’t seen any clinical or epidemiological evidence that people are becoming reinfected.

Some have suggested that otherwise healthy people in low-risk demographics should get infected on purpose to build immunity. We’re also hearing a lot about “herd immunity.” The premier of Quebec, Francois Legault, recently suggested embracing “natural immunity,” by which he seemed to mean accepting younger people can get the virus without suffering significant consequences. What crosses your mind when you hear this talk?

It’s a very bad idea. We know that most people who are young and otherwise healthy will have a mild disease, but we can’t predict who is going to be the exception to that, and who is going to develop a more severe form of the disease. And certainly we’ve seen young people with catastrophic consequences from this infection.

The second part of that is those individuals can infect other people who may be more vulnerable, so it would be putting others at risk as well. I understand the urge, but it’s not a viable approach from a public health perspective.

RELATED: Why the abortion pill is more important than ever during the coronavirus

Everybody wants to overcome this pandemic as quickly as possible and get back to normal life, but that would be a distinctly unsafe way of achieving this. Another corollary of that is whether people who have become infected, intentionally or unintentionally, can be cleared to return to work and re-engage in normal activities without social distancing—the so-called “immunity passport.” That brings up a lot of concerns as well, because it would encourage people to become infected, and invariably some people are going to die.

How has our understanding changed of people who are said to be asymptomatic—infected but not showing any symptoms—over the course of this pandemic?

So, definitely the bulk of evidence has shifted on this topic. Initially, it was challenged—the idea of whether or not people who are asymptomatic or pre-symptomatic were capable of transmitting the virus. Now we know, unequivocally, that the answer is yes. And there are compelling studies that suggest this is the primary way that the pandemic has spread. It’s a major challenge from a containment perspective, because if we only focus on testing and isolating people that have symptoms, that’s just the tip of the iceberg.

This is largely the rationale behind universal physical distancing applied throughout society.

Should these asymptomatic people then be tested?

This has to do in part on whether there are plans to lift social-distancing restrictions. If that happens, you would need to have a process in place whereby you could screen people who are asymptomatic. If people are going to continue physically distanced, then it becomes less important, and there are logistical challenges as well because that would be an extreme strain on our testing capability.

You would also need to have a plan for how often to test people [as some could get exposed to the virus after testing negative].

RELATED: Ontario will re-open for business. But expect a marathon, not a sprint.

We’ve heard the term ‘viral load’ be used quite a bit. What does it mean ? And what determines the size of a person’s viral load?

Viral load just means the quantity of virus that person is carrying.

The amount of virus detected is determined by a number of factors; one of the most important has to do with the timing. Earlier in the course of the infection, and even before symptoms are evident or they are quite mild, is when the virus is most actively replicating and when we can detect the largest quantity of the virus. Theoretically, the more virus that a person has in their airway, the more they could transfer that virus through their respiratory droplets.

Viral load doesn’t strictly correlate with the severity of someone’s illness. In fact, we think that when people do become very sick later in their disease course, after eight to 12 days from their first symptoms, their worsening is primarily driven by an immune response that is triggered by the virus. It is not caused by damage inflicted directly by the virus.

Some anecdotes seem to suggest that health-care workers are more vulnerable to serious illness after being infected. Is that the case? If so, why?

I’ve also heard that anecdote, but I haven’t seen any data that convincingly shows that to be true. I think it’s mostly speculation at this point.

Are there hidden factors in people’s immune system that could cause otherwise healthy people to get ill with a virus like COVID-19, or be more vulnerable?

There’s a lot of different factors that influence whether somebody becomes ill after exposure. One of them would be their immune response. There are a number of different immune abnormalities that we have names for, and we have a good understanding of their genetic determinants.

But there are far more that we don’t have a clear understanding of. Usually, though, when those sort of conditions are being considered, those people are usually predisposed to severe disease throughout their life. We would expect that there are some other severe diseases in the person’s past (and therefore they’d be aware they are immunocompromised).

That said, everybody’s immune system is going to be slightly different. And we don’t yet understand why some people, when exposed to the exact same germ, develop disease and others don’t. The immune system is just one factor that we’d consider.

What other factors would be considered that would determine how ill someone gets?

Sometimes it’s just luck. Sometimes it has to do with the exposure, and the nature of the exposure, how much of the virus the individual has been exposed to and via what route. For example, if three people are living in a house and one person is infected, we may assume that the other two people have identical exposure to the infected person, but in reality they wouldn’t. That might influence who gets sick and how severe their illness becomes.

But we really don’t know a whole lot about why some people get sick and some don’t.

Quebec has been talking about opening primary schools in a few weeks with some restrictions. Saskatchewan has said it will open businesses in early May. Is that reasonable, or too soon in your opinion?

There are contrasts between the two provinces which raise important points on how this needs to be addressed. Clearly, the number of new infections in Quebec is alarming and it would make lifting of restrictions foolhardy.

It’s not to say there couldn’t be individual jurisdictions within a province that aren’t seeing cases (that could warrant lifting restrictions), but it’s going to be a very difficult balance. In order to open trade, by definition you’re going to have people coming and going and potentially introducing infection, and there would need to be a very widespread capacity for testing in order to consider that.

RELATED: How grieving has changed during coronavirus: A funeral director’s experience

I would advise against it. I don’t think it’s worth putting the population at risk for the benefit of a couple of weeks of primary school.

Obviously, I have a bias towards preserving lives over livelihoods. Politicians may not agree with it. But I think at this point in time, we just don’t know enough about this infection and about what is going to happen. The hints we do have should really give us pause about opening too soon.

In the same vein, we’ve heard professional sports leagues like the NHL musing about playing games for broadcast only at specific, carefully controlled sites. Does that sound viable to you? What advice do you have for them?

I think it’s going to be very difficult because these leagues operate across so many different jurisdictions, and what’s allowed in one state or province is not necessarily allowable in others.

There’s a concern that players could spread infection between each other, their families and their communities. And even without spectators, for a hockey team, you’re still talking about 30-some people who are going to be frequently exposed to each other between the players and the coaches and the training staff, and then multiply that by two for each game.

There would have to be a very thoughtful approach on how to mitigate the risk of infection, including aggressive testing, monitoring for symptoms, and isolating individuals if necessary.

Some people have said a cycle of lock-down and release due to COVID-19 could last an upwards of four years. Does that sound reasonable to you?

This coronavirus is here to stay, and until we have a vaccine available, we’re going to be going through this dance of loosening restrictions, having a surge of infection, increasing restrictions, infections dropping, and then repeating.

How many years that goes on for, I’m not sure. It can be a number of years, and I hope that before we get there we’ll have a safe and effective vaccine that is available and is able to severely interrupt transmission so that the virus is no longer a threat to us.