Canada now has more people in hospital than at spring peak

On May 6, 3,083 people were hospitalized, with caseloads going down. On Dec. 8, 3,093 were in hospital, with infection rates on a steady rise across the country. 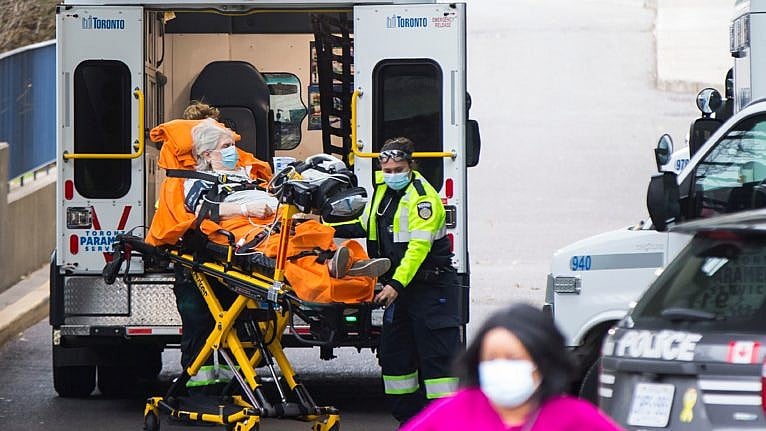 A patient is wheeled out of an ambulance to a hospital in Toronto, Canada, on Nov. 16, 2020. (Photo by Zou Zheng/Xinhua) (Xinhua/Zou Zheng via Getty Images)

On Dec. 8, 136 people were admitted to Canadian hospitals with COVID-19, pushing the nation’s total to 3,093. That surge of new patients—the highest one-day number since late April—created a grim new record: Canada now has more people in hospital with COVID-19 than it ever did during the first wave.

The spring peak occurred on May 6, when 3,083 Canadians were sick enough with the viral disease to need hospital treatment, according to COVID-19 Tracker Canada.

Now, the pandemic is much worse. On Dec. 8, the national rate of new cases was 172.3 per million population, though that rate varies across the hot spots in Western and Central Canada:

Canada is adding 50,000 cases to its cumulative tally every 10 days. Given that roughly four per cent of active cases are admitted to hospital, that means waves of new cases are going to keep hitting the doors of the nation’s hospitals until spread of the infection is reduced.

Alberta saw 45 new hospital admissions on Tuesday and now has 654 COVID-19 patients in its medical facilities. The province has 112 patients being treated for COVID in critical care alone, the same number of COVID-19 patients that it had in its entire hospital system at the peak of its first wave, according to COVID-19 Canada Tracker.

RELATED: COVID-19 in long-term care: a report from inside

One of those on the front lines is Dr. Darren Markland, an ICU physician at Edmonton’s Royal Alexandra Hospital. He hasn’t had a day off in months. “Everything is harder and less efficient,” he told Maclean’s. “Part of it is the scale at which things are happening.” He commends Alberta Health Services for doing “a fantastic job” in carving out new spaces for COVID-19 patients, getting machinery and human resources, but says that all those changes disrupt a system that is used to running a specific, precise way. For instance, he and others have to be very careful in how they transmit information to new ICU staff who may not be familiar with their processes and procedures. That communication process is further complicated by layers of PPE.

With the province’s hospital system increasingly strained, Premier Jason Kenney imposed the toughest public health restrictions seen in Alberta since the spring wave, including prohibiting all indoor and outdoor social gatherings, making mask-wearing mandatory in all indoor public spaces and requiring everyone to work from home if their physical presence is not essential. “If stronger action is not taken now, we know that hundreds, potentially thousands, of Albertans will die,” Kenney said.

“This lockdown has to happen because we need to preserve hospitals,” Markland warns. In the province, patients in some intensive care units are being double-bunked and at one point the Alberta Health Services warned that hospitals needed “to reduce the demand on the bulk oxygen system,” to which one anaesthesiologist commented, “I’ve never had this happen in all my years of practice.”

Markland hopes his fellow Albertans will take the new rules to heart. “Don’t go to the mall, don’t figure out a way to meet,” he says, adding that doing these things will simply drag out the restrictions longer. “Rip the Band-Aid off and deal with it.”

Dr. Noel Gibney, a professor emeritus in the department of critical care medicine at the University of Alberta, and lead signatory of a letter sent by 86 doctors to Kenny on Nov. 9 pleading for a two-week “circuit-breaker” lockdown, told Maclean’s that no one should expect the situation to improve by Christmas. “The problem now is that the situation is so severely out of control that it is likely to take longer than that to reach any typical control goals such as an R number of less than 0.8 or a new infection rate under 300 per day,” he explained in an email.

On Tuesday, as Ontario reported 69 new COVID-19 hospitalizations, the CEOS of three hospital systems in York Region issued a public warning that a “significant increase” in COVID-19 admissions in recent weeks meant their hospitals had reached a “tipping point,” and that scheduled surgeries and other services may be affected. In mid-November, the hospital in Steinbach, Man., was so overwhelmed that nurses were triaging patients in their cars because there was simply no space in the emergency room, the Manitoba Nurses Union told Global News. On Dec. 3, Premier Brian Pallister advised all Manitobans to avoid gathering for the holidays, saying, “I’m the guy who’s stealing Christmas to keep you safe because you need to do this now.”

The situation in the United States is a harbinger of what doctors do not want to have happen in Canada. There, experts have noticed that the proportion of COVID-19 patients being hospitalized is falling. But that isn’t a sign that things are getting better. Instead, hospitals are so overwhelmed that they can’t handle the volume of new admissions and so are restricting admission, The Atlantic reported. In other words, a medical condition that would get a patient a hospital bed in September or October is not serious enough to gain admission now. In South Dakota, where daily rates are averaging around 1,000 per million population, more than 150 COVID-19 patients were sent home with oxygen tanks.

In spite of the rising rates of hospitalization across Canada, doctors emphasize that their doors are still open to everyone seeking medical treatment. “I need people to come to the hospital when they are sick,” says Markland, “If they don’t come, things get worse.”