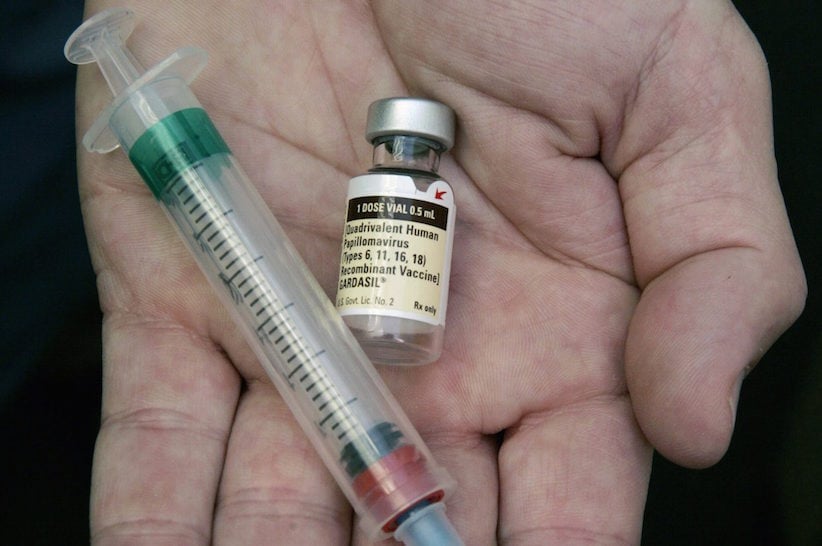 In this Aug. 28, 2006 file photo, a doctor holds a vial of the human papillomavirus (HPV) vaccine Gardasil in his Chicago office. (AP Photo/Charles Rex Arbogast, File)

TORONTO – The proportion of oral cancers caused by the human papillomavirus has risen significantly in Canada, say researchers, who suggest the infection is now behind an estimated three-quarters of all such malignancies. In a cross-Canada study, published Monday in the Canadian Medical Association Journal, the researchers found the incidence of HPV-related oropharyngeal cancers increased by about 50 per cent between 2000 and 2012.

“It’s a snapshot of looking at the disease burden and the time trend to see how the speed of the increase of this disease (is changing),” said co-author Sophie Huang, a research radiation therapist at Princess Margaret Cancer Centre in Toronto.

Researchers looked at data from specialized cancer centres in British Columbia, Alberta, Ontario and Nova Scotia to determine rates of HPV-related tumours among 3,643 patients aged 18 years or older who had been diagnosed with squamous cell oropharyngeal cancer between 2000 and 2012.

Statistics from a Canadian Cancer Society report last fall showed 1,335 Canadians were diagnosed in 2012 with HPV-related oropharyngeal cancer and 372 died from the disease.

HPV is the most common sexually transmitted infection worldwide. Most people never develop symptoms and the infection resolves on its own within about two years. But in some people, the infection can persist, leading to cervical cancer in women, penile cancer in men and oropharyngeal cancer in both sexes.

Most cases of HPV-related oral cancer are linked to oral sex, said Huang, noting that about 85 per cent of the cases in the CMAJ study were men.

HPV-related tumours respond better to treatment and have a higher survival rate than those linked to tobacco and alcohol use, the other major cause of oral cancer, she said, adding that early identification of a tumour’s cause is important to ensure appropriate and effective treatment.

RELATED: Should boys be vaccinated against HPV?

While some centres in Canada routinely test oral tumours to determine their HPV status, such testing is not consistent across the country, the researchers say.

In the past, physicians generally tended to reserve tumour testing for cases most likely to be caused by HPV — among them younger males with no history of smoking and with light alcohol consumption — to prevent an unnecessary burden on pathology labs.

“Only as accumulating data have supported the clinical importance of HPV testing has routine testing been implemented in most (though not all) Canadian centres,” the researchers write.

The study showed that the proportion of new HPV-related oral cancers rose as those caused by non-HPV-related tumours fell between 2000 and 2012 — likely the result of steadily declining smoking rates.

Huang said males tend to have a weaker immune response to HPV than do females, which may in part explain the higher incidence of oral cancers linked to the virus in men.

HPV vaccines given to young people before they become sexually active can prevent infection — and the researchers say both boys and girls should be inoculated.

Currently, six provinces provide HPV immunization to Grade 6 boys as well as girls, with the other four provinces set to add males to vaccination programs this fall, said Huang.

“So vaccinating boys is very important because, if you look at Canadian Cancer Society statistics (for 2012), HPV- related oropharyngeal cancer in total numbers has already surpassed cervical cancers,” she said.

“The increase of HPV-related cancer is real, and it’s striking that there’s no sign of a slowdown.”