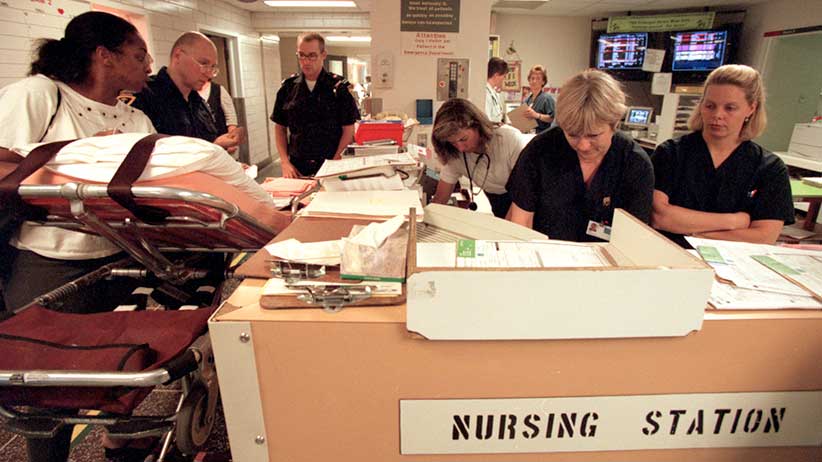 We finally did it last year. In 2016, we hit the 20-week mark for the average wait time for treatment by a specialist (across 12 medical specialities) after referral from a general practitioner. Canada’s national shame had reached a record high of 20 weeks, a far cry from the 9.3-week wait measured by the Fraser Institute’s annual survey in 1993.

One would have thought, nay, hoped, that this milestone would have served as a wake-up call to rally politicians and policymakers to improve the dismal situation faced by patients in our country. And yet, this year’s survey finds that wait times have gotten even worse. At 21.2 weeks, between referral from a GP to receipt of treatment, patients waited longer than ever for treatment in 2017.

Provinces such as British Columbia (26.6 weeks) and Alberta (26.5 weeks) have reached their own historic highs, Quebec has broken the 20-week mark for the first time since 2003, and patients in New Brunswick can expect to wait almost a full year for treatment (41.7 weeks). In fact, in certain provinces, patients can routinely expect to wait more than a year to receive orthopedic surgery and neurosurgery. In many cases, physicians routinely report that their patients wait longer than they (physicians) consider clinically reasonable (never mind what patients would prefer if they had their way). 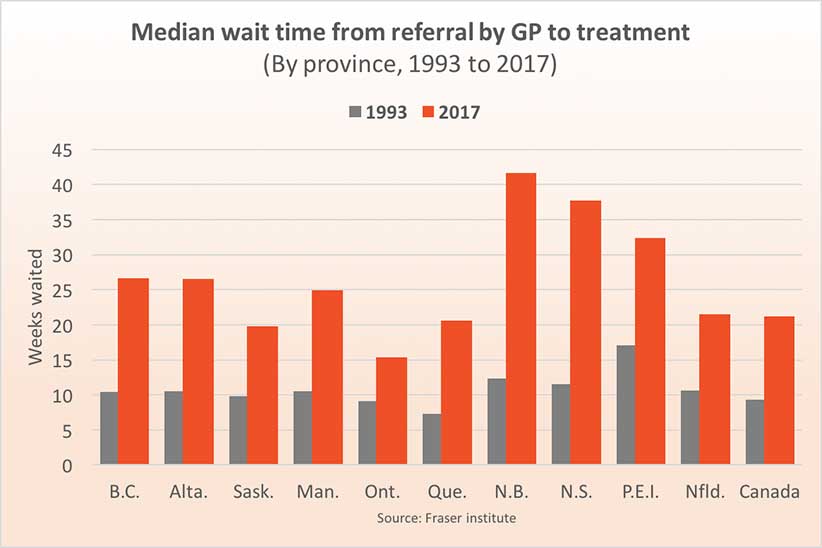 The simple question on everyone’s lips is why? Why do we wait so long, and why aren’t things improving? The answer is simple, but profoundly frustrating. It’s because policies have not changed.

Although we are now more aware than ever that universal health-care systems in other countries deliver more timely access to quality care at similar or lower costs, we continue to pursue the very policies that set us apart from them.

READ: How bad teeth are at the root of income inequality in Canada

Instead of embracing the private sector as a partner, or even just as a pressure valve, defenders of the status-quo continue to demonize the private sector as antithetical to the very nature of universal health care. Yet, when we look at some of the more successful universal health-care systems such as Switzerland, the Netherlands, Germany and Australia, we find that private insurers and providers are deeply woven into the fabric of their systems. For example, Switzerland ensures universal insurance coverage through a competitive (albeit, regulated) private insurance market. More than 40 per cent of hospitals in Germany are private, for-profit institutions.

Canadian policymakers are also obdurate in their rejection of copayments and deductibles. While such payments are explicitly prohibited by the Canada Health Act (via threat of financial penalty to the provinces), they are routinely used in other universal health-care systems. For example, patients in the Netherlands can expect to pay a deductible before coverage begins. In addition to a deductible, patients in Switzerland are expected to pay 10 per cent of treatment costs. Of course, most of these countries also either exempt vulnerable populations, provide subsidies, or maintain an annual cap for total out-of-pocket expenses.

These differences, among others, between Canada’s system and other more successful universal health-care systems are generally tied to Canada’s stubborn adherence to a single-payer model. In Canada, government controls the purse strings, physician and patient incentives are obfuscated, and individuals are generally not allowed to pay directly for treatment within the country’s borders.

Of course, there are those who choose to ignore the plight of Canadian patients, and instead focus on discrediting the Fraser Institute’s survey methodology. Perhaps they would have more trust in data from the Commonwealth Fund, which recently ranked Canada last (among 11 countries including Switzerland, Germany and the Netherlands) in a) the ability of patients to secure a same or next-day appointment when sick, b) the wait for treatment in the emergency department, c) the wait to see a specialist and d) the overall wait for elective surgery.

Or perhaps these same critics could simply listen to the thousands of Canadians waiting for treatment, including patients who recently took to Twitter (with the hashtag #CanadaWAITS) after Globe and Mail health reporter Andre Picard’s call for stories.

The fact is, when it comes to the specific way we structure our universal health-care system, we are not the norm, but rather the exception. Unfortunately, we pay for our exceptionalism with long wait times that have become the defining characteristic of Canadian health care.