To know when we'll return to normal, we must first figure out how to get there. One Prairie province might just show the way. 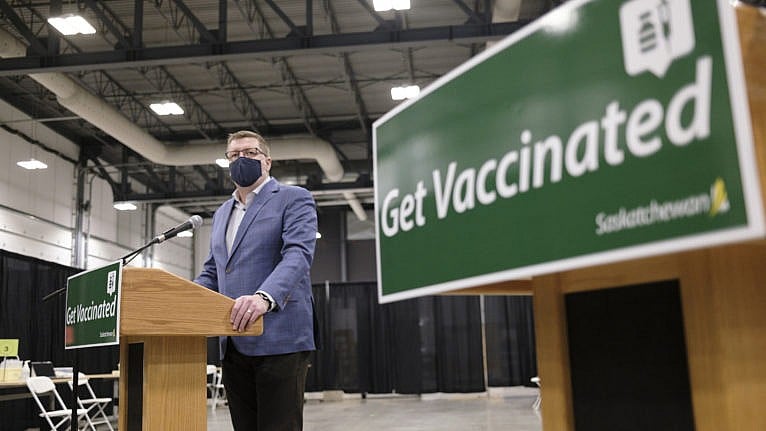 Scott Moe, the Saskatchewan premier, speaks to media in February after a tour of a COVID-19 mass immunization clinic. (Michael Bell/CP)

Half of all Canadian adults have received first shots of a COVID-19 vaccine. Case counts and hospitalizations are coming down in some provinces. The weather is improving. As many Canadians endured another Mother’s Day weekend under tight gathering restrictions, they watched videos on social media of vaccinated Americans joyfully reuniting with friends and families. And that combination has left Canadians desperate to know the plan for how we can enjoy the freedoms so many Americans and Britons do right now.

“People are wanting hope,” says Dr. Cory Neudorf, a professor in the department of community health and epidemiology at the University of Saskatchewan. “They want to know that the sacrifices they’ve been asked to put in for the last year and a bit have been worth it, and that there is light at the end of the tunnel.”

“We all want to have a summer where we can see our loved ones and invite friends over for barbecues,”  said Prime Minister Justin Trudeau on Tuesday.  Officials in some provinces, including Ontario and Alberta, have said they are working on reopening plans.

RELATED: Ontario has paused AstraZeneca. So, can I get my second dose sooner?

But only Saskatchewan—well ahead of most provinces in getting shots into the arms of its residents—has released a detailed one. And it may serve as a rough blueprint for the rest of the country to follow. At the very least, it gives a sense of the signals and milestones that will show the way to our long-awaited life after lockdowns.

“The road back to normal runs through one of our vaccination clinics,” said Premier Scott Moe on May 4. “Saskatchewan’s reopening roadmap is a three-step plan to gradually lift the current public health orders as Saskatchewan reaches significant vaccination levels.”

The first step of the province’s Re-Opening Roadmap occurs three weeks after 70 per cent of those 40 and older have received first doses and vaccine eligibility has been opened to all adults, 18 and older. Moe expects that will occur in the last week of May, and at that point some restrictions ease. Bars and restaurants will open, and up to 30 people will be permitted to attend indoor public gatherings. As further vaccination and timing targets are reached, more public health measures will be eased.

Moe uses the United Kingdom’s stepped approach as his model, pointing out that Britain started step one of its reopening on March 8, when 43 per cent of adults had their first doses of vaccine; he announced his plan on the day Saskatchewan reached 44 per cent.

“The emphasis on immunization coverage as the main metric to be looking at for a reopening strategy is a good move,” Neudorf says. “It gives people a reason to go out and get immunized because once we reach certain marks, we’re part of the solution.” What’s more, he says, the simplicity of Saskatchewan’s plan makes it easy for everyone to understand.

“But it’s maybe just a bit too simple as well, if I can be critical of our province,” Neudorf continues. He doesn’t think reopening metrics should be solely dependent on age-based immunization rates, explaining that vaccinations alone won’t get Saskatchewan or the rest of Canada out its third wave. He, like Moe, uses the example of the United Kingdom, which began its own “first dose first” vaccination program at the very start of 2021.

That meant it was in midst of a variant-fuelled third wave while ramping up its vaccination rollout, like Canada is now. Yet, its government also instituted a severe lockdown just before Christmas that was harsher than anything seen in Canada and has lasted longer than most here, Neudorf explains. As well, Britain’s multi-phase reopening plan was far more detailed than any Canadian one, so much so that it is a 21-page section within a 64-page overall COVID-19 response plan for the spring of 2021 (the devolved governments of Scotland, Northern Ireland and Wales customized it for their own residents). Each stage could proceed only when the government determined it had passed four tests, measuring not only vaccination levels and the effect vaccines were having on hospitalization and death rates, but also infection rates and the spread of new variants.

Britain’s pace of reopening is notably deliberate, with at least five weeks between each step. After that first step on March 8, there was a wait until April 12 before retailers and hair salons and outdoor pub dining were allowed to reopen. Even then, many restrictions remained. So, even though Britain’s daily case count had dropped to 38.5 per million, only 30 masked people were allowed to attend Prince Philip’s funeral a few days later on April 17, and his widow, Queen Elizabeth II, had to sit alone inside the chapel at Windsor Castle, as her extended family weren’t part of her own household. Indeed, the pace is so slow that indoor dining isn’t scheduled to restart until May 17, at the earliest.

Neudorf would like provinces, including Saskatchewan, to adopt more nuanced, paced reopening plans like those of Britain, using indicators such as hospital capacity, test positivity rates and case counts. In addition to looking at vaccination rates, he says, officials should ask themselves whether all those indicators are coming down; if so, “then we can start moving to relax restrictions.”

Like Neudorf, Dr. Theresa Tam, Canada’s chief public health officer, has cautioned against relying one only one metric, such as vaccinations. At the end of April, she announced a reopening indicator of her own: the 75-20 metric. Public Health Agency of Canada modelling showed that restrictions could be safely lifted after 75 per cent of adults have received their first doses and 20 per cent have received their second doses of vaccines, but only as long as “adequate tests, trace [and] isolate capacity and individual precautions are maintained,” Tam explained. Vaccine data crunching by economist Trevor Tombe puts a possible date for reaching that 75-20 mark around Canada Day, though burgeoning deliveries are pushing it even earlier.

Though lots of Canadians are impatient, Trudeau emphasized the need for multi-faceted reopening programs like those favoured by Neudorf and Tam. “If we can do this, then we can have a more normal, better summer,” the Prime Minister said on Tuesday. “And a one-dose summer sets us up for a two-dose fall when we’ll be able to talk about going back to school, back to work and back to more normality.”

For provinces like Alberta, which has a per capita case rate more than double that of all of Canada, it could take a while for those metrics to improve to a point where restrictions could ease. Meanwhile, in hard-hit Ontario, Dr. David Williams, the chief medical officer of health, said that, while he doesn’t have  “definite metric” for reopening, he posited that a case count of below 1,000 per day may be needed, far below the daily average of more than 3,000 cases posted that same day.

Even as reopening plans are being unveiled, Neudorf cautions that officials should avoid playing into the expectation that “at some magic number or date, COVID is just going to disappear from the face of the planet.” The virus keeps delivering surprises, he notes, “so it’s good to make sure we keep a certain amount of humility in our predictions. It’s getting that balance right of how much can you say to give people hope without running into huge margins of error.”