A new survey finds optimism among Canadians about how the pandemic will play out. But our U.S. and U.K. cousins appear more generous and helpful in the face of the crisis.

The novel coronavirus has now been detected around the globe, save for Greenland and Antarctica. As of Thursday, nearly 500,000 cases had been confirmed worldwide and more than 22,000 people had died. But while the spread of the virus seems universal, attitudes toward it—and toward measures aimed at limiting its spread—differ from country to country.

Some 56 per cent of Canadians believe their government has a plan that will work to control the outbreak, while less than half of Americans and Brits—42 per cent and 40 per cent respectively—feel the same way, according to a new survey led by Canadian researchers. 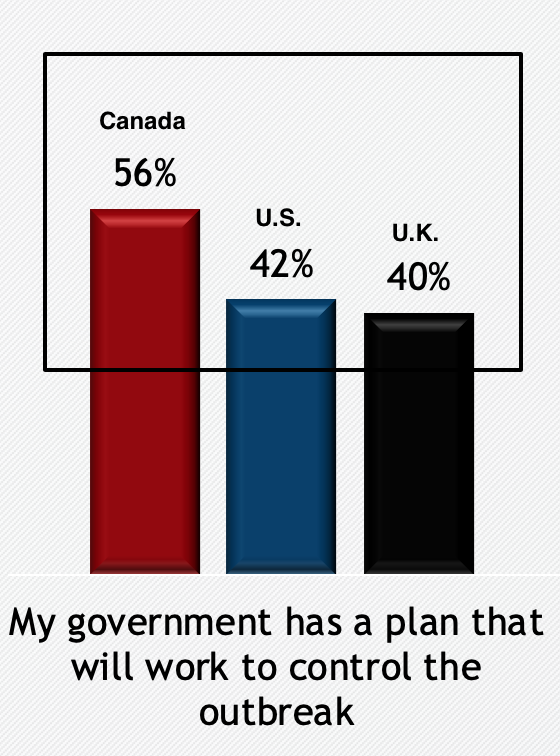 “Some of that may be their society or cultural differences, that Canadians are more optimistic,” said Heather Bastedo, principal researcher at Toronto-based Public Square Research, who conducted the survey of Americans, Brits and Canadians, in partnership with the online market research firm Maru/Blue.

But the variation could also be in response to what’s going on in real time, added Bastedo, who is also a professor of political science at McMaster University in Hamilton, Ont. The survey of 5,000 respondents (1,500 English-speaking Canadians, 1,500 Americans and 2,000 British people over the age of 18) was conducted between March 17 and March 19. By then, Canadian Prime Minister Justin Trudeau had already imposed international travel restrictions, while his British counterpart, Boris Johnson, had kept the U.K. largely open.

Despite the difference, there is equal trust of Trudeau and Johnson within their countries, at 53 per cent and 54 per cent respectively, according to the survey. U.S. President Donald Trump, however, lags behind in trust at 47 per cent. Trump also has a higher percentage of Americans who don’t trust him at all compared to his Canadian and British counterparts, the poll suggests—a figure that did not entirely surprise Bastedo. “We say that Canada’s polarized, but it’s really 25 per cent that don’t trust Trudeau at all, versus 37 per cent of Americans with respect to Trump,” Bastedo said.

If there is confusion in all three countries as to what leaders should be doing, it might be linked to the inconsistency in restrictive measures and messaging—both between countries and within them.

One need look no further than Florida’s sprawling beaches, filled with spring-breakers from across North America who, as recently as last week were ignoring urgent calls from public health officials to practise social distancing. Beaches were still crowded on March 20, days after Canada and the U.S. closed their shared border in hopes of hammering through one simple message: stay home.

Confusion has persisted in the United Kingdom, too, as the government staggers its response to the pandemic. Johnson’s go only invoked lockdown measures on March 24, when the country already had nearly 8,000 confirmed cases. Commuters spared no time to report just how little changed on London’s packed underground trains the following day, where there was still barely any space to stand.

Canadians’ confidence in their government to carry them through the pandemic counted among a few measures that set them apart in a survey that also revealed commonalities. 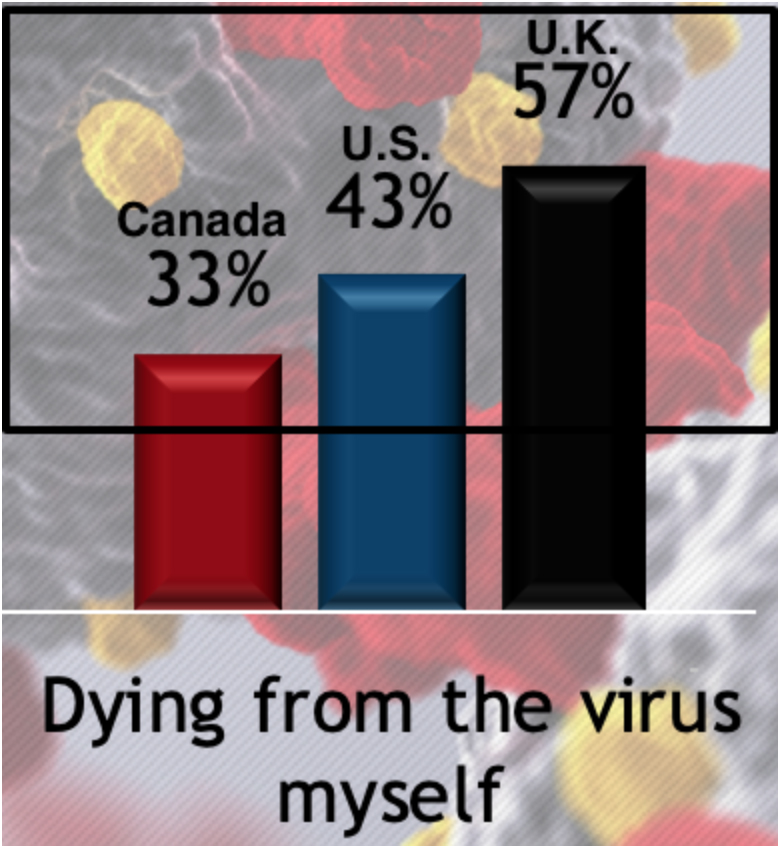 The heightened anxiety in the U.K. may be attributed to their close proximity to hot zones of the COVID-19 crisis, like Italy, where the total number of deaths (more than 6,000) is almost double that of China, while Canadians and Americans may have felt at ease as they’re oceans apart from the worst of the pandemic. This, of course, has since changed in the U.S., which now holds the third-largest number of cases worldwide at more than 63,000. New York State alone has more than 30,000 cases, 15 times that of Canada’s total.

But while Canadians seem less worried, their confidence in government may have led to a lack of interest in helping others through the outbreak. Canadians admitted to being less likely to share supplies or help their friends and neighbours than Americans or the Brits. It is a finding that surprised Bastedo, as Canadians are stereotypically known as polite and willing to lend a helping hand.

“We rely on our government, and culturally we know this, more than those other countries,” Bastedo explained. Canadians, it seems, are placing bets on the government’s plan to work.

Despite differences, some feelings, the survey found, are as universal as the virus itself: worries about the economy, acceptance of the need to stay home to curb spread, and understanding of the virus’ symptoms. Distrust in the media is also seemingly widespread. Less than six out of 10 Canadians (58 per cent) trust where they get their news from, the survey suggests. And that is the highest figure of all three countries, as the level of trust drops down to 46 per cent in the U.S., and 37 per cent in Britain.

How long before society returns to a sense of normalcy is still anyone’s guess. But in keeping with other results, Canadians maintain their optimism. Almost half of those surveyed think coronavirus will taper off in three to six months, compared to 42 per cent of Americans and 37 per cent of Brits.

Bastedo will be conducting a similar survey in the coming weeks to measure how attitudes change as government responses and, inevitably, the number of cases ramp up: “The critical thing here will be how the situation evolves over time.”