Fear is the right reaction to the coronavirus, says a top public health expert, and governments are acting too slowly. It's time to close schools and curtail travel. 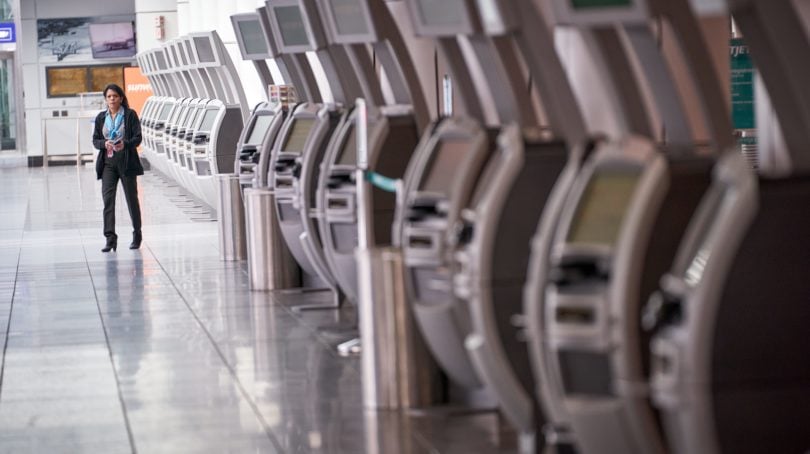 A view of an empty Montreal-Pierre Elliott Trudeau International Airport in Montreal, on March 12, 2020 (EPA/ANDRE PICHETTE)

Dr. David Fisman is afraid of COVID-19, and thinks you should be, too.

Fear, which is usually unhelpful—a powerful emotion that stops us from thinking clearly and making sensible decisions—is the ally of public health officials trying to deal with this threat. “For once it’s actually adaptive,” said Dr. Fisman in an interview on Thursday. “Everyone should be very scared.”

Fisman is the head of epidemiology at the Dalla Lana School of Public Health at the University of Toronto and a graduate of the Harvard Medical school. He has spent his career studying this kind of thing, and he thinks we are acting too slowly.

Our politicians and officials can only act insofar as they have public buy-in. In the case of the coronavirus—the biggest threat to global public health in many decades—that means that governments are likely under-reacting, acting more slowly than they should to keep us safe.

“We’re going to be in some very hot soup in a couple of weeks,” says Dr. Fisman. “It’s entirely predictable. It’s like watching a car-crash video in slow motion. You know exactly what’s going to happen. And it’s moving slowly and it’s painful to watch and you know how it’s going to end up.”

READ MORE: Coronavirus: What Canada can expect to happen in the next two weeks

In Italy, and in Seattle, where testing failed to find COVID-19, officials were unaware of its presence until people started dying. The math around that is terrifying. “When we have epidemics presenting with deaths, what that means is it’s an old epidemic, because it takes people a while to get sick enough to die,” says Dr. Fisman in a terrifying recent webinar. “So, we have a bit of a heuristic. If you see two deaths, and we think case fatality is two per cent, those two deaths represent 100 cases, and they represent 100 cases from two weeks ago. So those 100 cases with a reproduction number of two means 200 cases the next week mean another 400 the week after. So 400 plus 200 is 600, plus 100 is 700. So you’ve got a minimum of 700 cases in your population by the time you see two deaths. So when places like Seattle start with deaths, and Italy starts with deaths, that tells you it has been brewing for a long time and we don’t want Canada to be catching this in that way, and that’s why surveillance is so important.”

The horrible thing about the disease when it gets ahead of public health officials in this way is what happens in the hospitals, where there are only so many respirators.

Eighty per cent of the cases in China were mild. But 15 per cent of people who get it will need to be hospitalized, and a quarter of those people need respirators, with a tube down their throat, or they will die of noncardiogenic pulmonary edema—which means their lungs fill up.

The problem is that there are not enough respirators for everyone if the virus gets out of control.

“If you have people who are on ventilators for three weeks before they can come off … what that does is that effectively drowns our intensive care unit resources in the province because they’re full,” said Dr. Fisman. “And that’s what happened in Italy. And that puts you in a situation where people go into respiratory failure, they come to a hospital and there’s nothing you can do for them. That’s what we’re talking about in terms of how bad this can get and how quick it can get bad.”

In Italy, doctors have been forced to make terrible choices about who gets a respirator, which means, basically, that older people, who are least likely to survive, are denied care. This is a horrible prospect, and we should taking proactive steps to stop it, as officials did in Hong Kong.

“We can be Hong Kong or we can be Italy,” says Dr. Fisman. “We have to choose one or the other. We don’t get to choose the status quo. The difficulty for the politicians is that if you shut things down now, and you achieve what you wanted to achieve, and it’s quiet, you are going to be excoriated for overreacting. People are going to say, you bastards, you cancelled the NHL season and my restaurant got no customers for a month.”

There’s no real choice, though.

“What’s remarkable in the models is that social distancing shuts this down,” says Dr. Fisman. “It’s not that transmissible a disease …  but that comes at an economic cost and I think we’re all aware of that.”

This is likely why Donald Trump, whose re-election prospects depend on a booming economy, has been downplaying the threat.

It may be why Doug Ford said Thursday that people should not cancel their March break travel plans, and why the federal government and the Public Health Agency of Canada have not advised Canadians to call off their trips, and why education departments have not yet shut schools.

Dr. Fisman says schools should send their students home and nobody should fly south for March break.

“From a public health point of view, this is sort of like putting our collective faces in a wood chipper. We know there is already uncontrolled spread in the U.S. There was an estimate from last week that says 30,000-50,000 cases, so it’s double that now. So what you’re going to see is folks go down there, pick this up, bring it back all at once and reintroduce it to the community. I fear that things could really explode post-March break. It won’t happen immediately but it will happen all over the place, and by the time it happens we will be in a very deep hole.”

He is not in favour, though, of the kind of travel ban that Trump announced in last night’s frightening address to Americans.

There are many places in the world—Iraq, Syria and Iran, for instance—without strong enough public health systems to detect and contain outbreaks. People who have been in those countries are a threat, but it is impossible to stop them from travelling.

“We are going to be repeatedly reseeded,” says Dr. Fisman. “Whatever we do in Canada, you’re going to have ongoing introductions. And you can say, let’s cut off travel to this country. Let’s cut off travel to that country. It’s whack-a-mole, because people travel to places via other places, and you are never going to be able to shut this out. So what I would anticipate is that we are going to have for a period of 18 months or two years, a series of little crises where things have to change and people shut things down, and then it’s all clear and people start to relax restrictions, like they’re doing in China now.”

Dr. Fisman thinks Trump’s messages to Americans will make the situation worse in the United States.

“Nero only fiddled while Rome burned. He didn’t get a jerry can of gasoline and throw it into the fire. He’s not only incompetent and fails any test of leadership, he’s actively making the situation worse, by encouraging the sort of behaviours and practices that are going to spur transmission. And to what end? The Dow’s not listening. The smart people who work at hedge funds aren’t listening, because they know.”

With insufficient tests and a public health system being directed by Trump, the United States is in for a difficult period. “There is a massive amount of COVID down there that they’re not finding. And I think they are on the cusp of some very rough times.”

Wash your hands. Work from home if you can. Avoid crowds. Cancel your travel plans. Consider talking to older relatives about what to do if they contract the disease.

Be afraid. Be very afraid.