But will it make a difference? 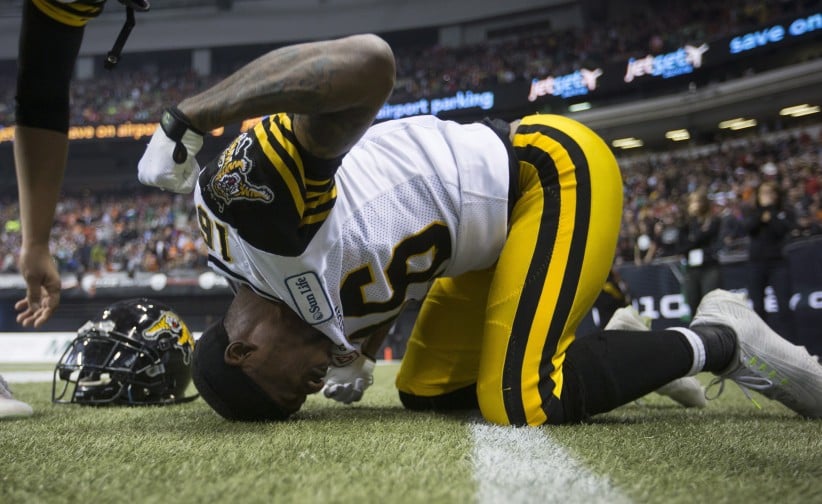 TORONTO – The CFL and NFL have teamed up to add a two-minute test to standard sideline examinations for suspected concussion, with the aim of quickly determining whether a player should be pulled from the field or can safely return to play.

But just how effective is the King-Devick test for diagnosing concussion? And is its implementation merely a public relations gambit by the football leagues — both defendants in lawsuits launched by groups of former players — or a bona fide means of looking after their athletes’ brain health?

But in the last five years, research groups around the world began studying the test to see if it could detect concussion, a brain injury that can affect attention and concentration.

Dr. David Dodick, a neurologist at the Mayo Clinic in Phoenix who specializes in concussion, said numerous studies have concluded the King-Devick test is highly accurate in picking up the brain injury.

“And that’s what makes it a very valuable tool,” said Dodick, noting that the time-based test is more objective than standard balance and cognition assessment tests like the SCAT3 and is not affected by player fatigue.

Players are given K-D tests before the start of their season to establish a baseline time for recounting all 120 numbers, which are laid out in increasingly difficult-to-follow patterns.

If a player is suspected of having sustained a concussion during play, he or she is retested and the results compared. Should the task take longer to complete or include errors, the athlete should be removed from play and seen by a doctor.

The Mayo Clinic, a non-profit U.S. health-care institution, this year endorsed the test for school-based, amateur and pro contact sports in a licensing agreement with King-Devick Test Inc.

“The reason we got involved with this is because we recognized the need for a simple, rapid and cost-effective sideline test,” said Dodick, who was born in Ontario and grew up in Nova Scotia. “So to have an objective and reliable test, we felt it was very important and we saw the potential for this King-Devick test to make a huge difference in increasing the likelihood of identifying concussion on the sidelines.”

The test, sold through annual subscription, costs US$20 per user per year and can be downloaded using the company’s new app, which uses Cloud-based data storage so parents, coaches or health professionals can easily enter and access test results, co-inventor Steven Devick said from Chicago.

“You need a baseline every year for the test to work,” he said, explaining that a person’s ability to fire off the numbers improves over time until about age 40.

The company now has about 75,000 annual users, despite not spending “a dollar” to market the repurposed product, said Devick. “But we expect to roll this out in a big worldwide way very soon.”

Dr. Richard Wennberg, a neurologist at Toronto Western Hospital, said that while studies suggest the test is effective in detecting concussion, he’s not sure how big a problem it’s addressing.

“They are making the point and you’ll read all the hype … saying this is a huge step forward because now we’ll be able to get players on the field out of the game and to the treatment they need,” he said. “That’s probably a pretty small group of individuals that really accounts for because most times it’s pretty obvious who’s had a concussion.”

Dr. Paul Echlin, a Burlington, Ont., sports medicine physician who treats young athletes with head trauma, doesn’t use the K-D examination and questions the ability of a two-minute test to diagnose the complex condition with any certainty — especially when it’s administered by parents or coaches.

“One test can’t say someone is concussed or non-concussed,” said Echlin, adding that if there’s any suspicion a player might have sustained the brain injury, they should be removed from play and fully evaluated by a physician.

Dodick at the Mayo acknowledged that some of his colleagues have voiced a similar criticism, saying the test should be given to youth athletes by qualified professionals — not lay people like parents or coaches.

“By the same token, do we not do anything? When we do have the tool, do we not administer it?

“What would the harm be? You identify someone slower and you take them out. You err on the side of caution.”

Still, Wennberg and Echlin worry the King-Devick test is just one more money-making scheme to cash in fears about the high-profile brain injury, which they say has become big business.

“It doesn’t address the bigger issue that you don’t want the concussion in the first place,” said Wennberg. “So we have to curb our enthusiasm here.

“There are so many interests at stake: the pro football leagues will want to look like they’re constantly doing something good. The repackaging people behind this old test want to make a buck, and all of them will have good intentions mixed in there.”

As for the CFL, the league is trying out the test for players on four teams — the B.C. Lions., Edmonton Eskimos, Calgary Stampeders and Winnipeg Blue Bombers — to determine if adding the King-Devick to other sideline examinations will improve identification of potential concussions among players.

“It’s really just to collect some numbers to see if this gives us an additional tool,” said Kevin McDonald, CFL vice-president of football operations. “We thought there was a real opportunity to get some meaningful data.”

The CFL is facing a $200-million lawsuit filed in May by two former players, who are seeking class-action status on behalf of all retired players going back to 1952. The suit, which has not been proven in court, alleges the league, former commissioner Mark Cohon, a Toronto doctor and clinic withheld information about how repeated concussions can lead to long-term cognitive disorders.

In April, a U.S. judge approved a settlement involving the NFL, which had long been accused of hiding the cumulative effects of concussions. The agreement involves thousands of concussion lawsuits and is expected to cost about US$1 billion.

McDonald denied that the CFL is adopting the test to appear that it’s taking action around the hot-button issue of concussion, especially in view of the lawsuit.