Charlie Sheen and the chase for an HIV vaccine

Charlie Sheen has the drugs to keep HIV at bay. One day, scientists hope to have a vaccine. 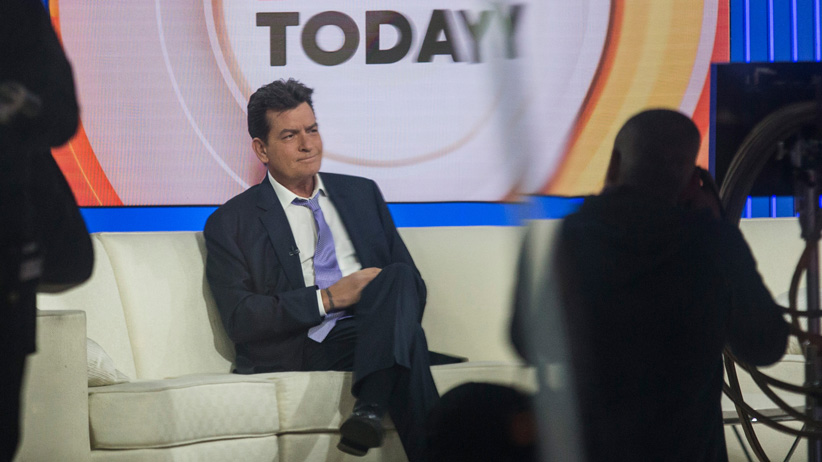 “It’s a hard three letters to absorb,” Charlie Sheen told Matt Lauer on the Today show on Nov. 17, confirming what had been rumoured in the tabloids—that the actor, once the highest-paid TV star in the U.S., is HIV-positive. “It’s a turning point in one’s life,” a sombre Sheen said.

Sheen, who’s been living with his diagnosis for four years, went public after blackmailers threatened to reveal his HIV status to the world, he said (Sheen claims he’s paid out some $10 million to extortionists). Public health officials and HIV researchers hoped Sheen’s interview would prod others to seek testing and treatment. Thanks to modern antiretroviral drugs, patients with HIV can expect to live a normal lifespan. It’s good news for Sheen—but not everyone has access to the same life-saving therapies.

Scientists are racing to develop a vaccine, which could one day wipe out a virus that’s killed 39 million since the start of the epidemic, according to the World Health Organization. There’s a financial argument to making a vaccine, too: new therapies, while effective, are expensive. “It costs the world in excess of $20 billion per year,” says Robin Shattock of Imperial College London, who leads the European AIDS Vaccine Initiative. EAVI2020 aims to develop candidates that can be taken to human trials within five years. Antiretrovirals are important, but “unsustainable [financially],” he says, “unless we can reduce the number of infections.”

Yet the HIV virus is a notoriously difficult target. For one thing, it can “hide out” in the body, Shattock says, “where it’s not seen by the immune system or drugs.” At Western University in London, Ont., the only North American collaborator on EAVI2020, renowned HIV researcher Eric Arts and his team use state-of-the-art imaging to find the virus, and see how the immune system responds to it—working directly in the body, and “not just in a test tube,” he says.

There are other challenges to creating an effective vaccine, says Arts, chair of the department of microbiology and immunology at Western’s Schulich School of Medicine and Dentistry. (He was recruited away from Case Western Reserve University in 2014.) The virus is incredibly adaptable. Thirty-five million people are living with HIV and AIDS worldwide, “but every person is infected with a different strain,” he says. “When the virus is transmitted to a new patient, it changes.”

Different subtypes circulate in different parts of the world. The majority of infections are in sub-Saharan Africa, where the virus looks completely different than it does in North America and Europe. Arts has done much of his work in Uganda, an HIV “hot spot.” Still, nearly all the drugs and vaccines developed so far have been derived from, and tested against, the HIV subtype found in Europe and North America, he says—not strains circulating in sub-Saharan Africa, where the situation is most dire.

Researchers worldwide are making progress toward a vaccine. In 2009, a trial in Thailand managed to bring down infection rates moderately among men and women. But it wasn’t a simple, single shot. (The treatment included two vaccines, given as six injections.) “That was the first vaccine to show a promising signal,” Shattock says. Western’s Chil-Yong Kang has developed an HIV vaccine from a genetically modified dead version of the virus. “We just finished the first HIV vaccine trial in Canada,” says Arts, who was partly drawn to Western to work with Kang. The results are now being analyzed.

EAVI2020 offers the chance to pool expertise of scientists from 22 institutions, “taking little bits from what everybody is doing and assembling it into a larger approach,” Arts says. He’s interested in creating a vaccine that’s effective against HIV strains in Africa, where it’s most needed, although he believes his approach will also work in other parts of the world. “We’re getting closer.”

On the Today show, Sheen’s doctor, Robert Huizenga, appeared with him. Thanks to antiretroviral therapies—Sheen said he takes four pills every day—levels of the virus in his blood are now “undetectable,” he said. Huizenga described his “biggest concern” as the actor’s substance abuse and depression, “more than HIV shortening his life, because it’s not going to.” That’s a miracle of modern medicine. For the many people who don’t have access to the same treatments as Sheen—the majority of them in sub-Saharan Africa—a vaccine can’t come quickly enough.