Clinic 554 for sale as N.B. government refuses to cover cost of abortions outside hospitals

The couple running the Fredericton clinic absorbed the cost of abortions for those who couldn't afford them, hoping the province would someday change its policy. Over time it took a toll on their finances. 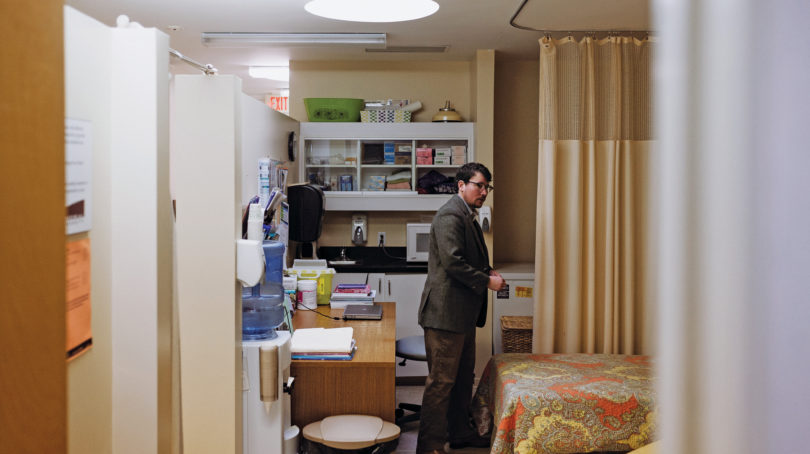 UPDATE, April 14, 2020: Citing pressure on the health-care system caused by COVID-19, the federal government agreed to temporarily reimburse the New Brunswick government the money it has withheld for clinic abortions charged to patients. An official in Health Minister Patty Hajdu’s office said the move is intended to maximize resources available to the province during the pandemic, and that discussions between the two governments regarding the abortion issue continue.

Dr. Adrian Edgar and Valerie Edelman had high hopes when they moved to Fredericton—he would be closer to his aging parents; she would discover the East Coast. Together, they’d open a clinic that would reduce the province’s well-known deficit when it comes to abortion access while providing care to marginalized patients, as the couple did for three years on Vancouver’s Downtown Eastside.

But over their next five years in the New Brunswick capital, the couple faced brick wall after brick wall, their plan crushed by a government that, in varying degrees, has limited access to abortion for decades. Their story is not unlike that of their predecessor, Henry Morgentaler, who two decades ago fought for abortion rights from within the same brick walls of their one-storey clinic.

“I can’t pay for abortions anymore,” says Edgar, a 37-year-old medical director of Clinic 554, referring to the province’s refusal to cover the cost of abortions outside hospitals—and the fact that he and Edelman routinely pay out-of-pocket for women who can’t afford the procedure. “I’m just a family doctor trying to keep doing health care for people without the government agreeing to reimburse me.” Edelman, a trained social worker who runs the clinic, says the couple feels pushed out of the province.

For now, their clinic is up for sale, potentially leaving one fewer option for women seeking surgical abortions unless they are able to go to hospitals in Moncton or Bathurst, two- and three-hour drives away, respectively. Clinic 554 has provided more than 1,000 abortions since it opened in 2015, and currently provides regular medical services to 600 patients, many of whom are transgender and elderly, says Edgar. For several years, through both Conservative and Liberal provincial regimes, the couple has written letters urging the province to fund abortions in clinics, as all other provinces that have stand­alone clinics currently do. There have been rallies outside the rainbow-painted clinic and petitions, all to no avail.

Recently, in a move that Edgar and Edelman would have welcomed years ago, the federal government made good on its threat to claw back health transfer payments to New Brunswick for failing to cover clinic abortions, which Prime Minister Justin Trudeau had said violates the Canada Health Act. In an email to Maclean’s, a spokesman for federal Health Minister Patty Hajdu said the feds would “ensure that the New Brunswick government allows paid-for access to clinics that offer abortion services outside of hospitals.”

The $140,216 cut—the cost of clinic abortions in 2017-18—will add sting to an ongoing crisis in health care in the province, made worse by the COVID-19 outbreak. (A public backlash toward recent health-care reforms recently came close to bringing down Premier Blaine Higgs’s Progressive Conservative minority government.) But it’s not clear that Ottawa’s move will prompt a change.

New Brunswick’s Health Department said it was too busy dealing with the outbreak to provide a response for this story. And in a Jan. 29 letter to Edgar, Health Minister Ted Flemming’s office said the government is “currently not considering any legislative billing changes.”

New Brunswick’s abortion legislation was introduced in 1985 in response to Morgentaler seeking permission to open a clinic in Fredericton, which he did in 1994. That was six years after Morgentaler won his landmark Supreme Court decision striking down the federal abortion law; in 2003, he challenged the legality of New Brunswick laws excluding abortions performed outside hospitals from public funding—a case that was still before the court when he died in 2013.

In 2015, after the Morgentaler Foundation closed the Fredericton clinic, Edgar and Edelman took over the downtown building, opening a family practice that provided abortions for fees of between $700 and $850. Every month, women are referred to Clinic 554 from New Brunswick hospitals—hospital abortions are provided to women who are less than 13 weeks and six days pregnant, whereas Clinic 554’s limit is 15 weeks and six days, and it offers same-day access.

But many who come through the door can’t afford the procedure. Edgar and Edelman absorbed the cost, hoping that the province would someday change its funding policy, and over time it took a toll on their finances. “We’re subsidizing health care for the province,” he says. “Morgentaler did it for 25 years; we lasted five.”

So Edgar has applied for a job in Saskatchewan—though he worries what will happen to women requiring abortions, as well as his elderly, transgender and HIV-positive patients: “I don’t like leaving things undone.” He’s also mulling a lawsuit against the province, saying he is frustrated by the government’s continued “ignorance” about a health policy that is “based neither in science, the law, nor compassion.”

They would reconsider moving, they say, if only the N.B. government would reverse its funding policy. Edelman, 45, regrets having to leave the home they bought and packing up their two dogs, Ella and Ollie, fixtures at the clinic who provided comfort to patients. “It’s emotionally hard to do all this work and get ridiculous answers from the government that make it very clear that they just don’t care,” she says. “It’s hard on the soul.”

This article appears in print in the May 2020 issue of Maclean’s magazine with the headline, “A white flag over rainbow walls.” Subscribe to the monthly print magazine here.