"I think a lot of survivors see this as their opportunity to define what breast cancer looks like on them."

By By Carrie Antlfinger, The Associated Press January 14, 2015 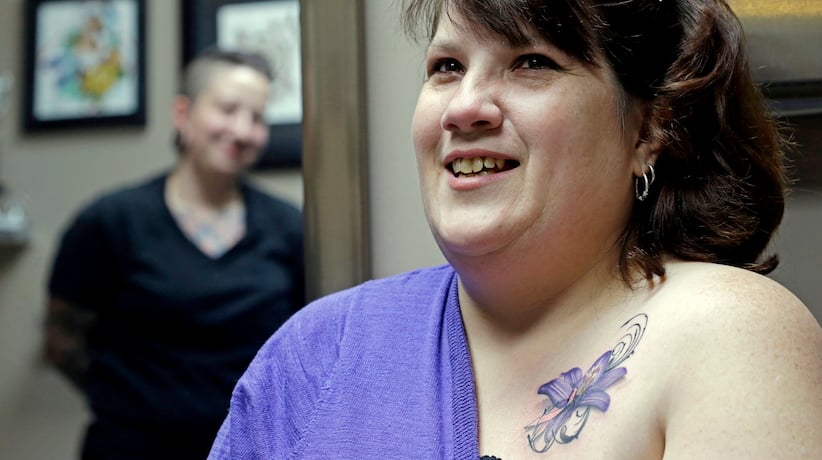 WEST ALLIS, Wis. – For women who have survived breast cancer, breast or nipple reconstruction can be a first step toward looking like their old selves. A Colorado organization is helping some of those women, and others who don’t choose reconstruction, in their emotional healing – through tattoos to help conceal their scars.

P.ink is a Boulder-based group that helps connect survivors with tattoo artists. Its first annual P.ink Day was in 2013, when it raised money and funded tattoos for 10 women in a single day in Brooklyn, New York. In 2014, the event expanded and featured all-volunteer artists in 12 cities in the U.S. and Canada who helped 38 women.

“I think a lot of survivors see this as their opportunity to define what breast cancer looks like on them, and that is the ultimate in personal empowerment we are shooting for here,” said Noel Franus, who launched P.ink with the help of others at the CP+B advertising agency, where he works.

Franus got the idea after his sister-in-law, Molly Ortwein, underwent a double mastectomy and wanted something more than reconstruction or tattooed nipples. She went to the family for ideas on a tattoo and got a pernambuco tree blossom one in 2013.

The organization also has a charitable arm, the P.ink fund, which raises money to pay experienced tattoo artists to work with survivors.

P.ink has created a smartphone app where women can look at designs and try one on via photo. And the group is considering creating a tattoo parlour dedicated to breast cancer-related tattoos and developing a training program for tattoo artists.

Diane de Jesus was among the women tattooed in Brooklyn at the first P.ink event. The 34-year-old dietitian said she requested a dove on her reconstructed left breast because she dreamed about the birds while going through treatment. She said getting her tattoo gave her a feeling of taking back control.

“I didn’t see my scar anymore, and it was the biggest surprise and biggest gift in going through this process,” she said.

Mari Jankowski, 44, worked through P.ink to get her purple lily tattoo in December. After the bartender and house cleaner was diagnosed with breast cancer, she had a double mastectomy and a hysterectomy in 2011 – an aggressive response in part because she had the breast and ovarian cancer gene and had lost her great-grandmother, two grandmothers and mother all to cancer that began with breast cancer.

Jankowski wanted to cover her chemotherapy port scar on her upper left chest because she said people often mistook it for a hickey. She was paired with Ashley Neumann, an artist at Rockstar Tattoo & Co. in West Allis.

Jankowski asked Neumann to come up with a design that incorporated the pink breast cancer ribbon with a lily – her mother and grandmother’s favourite flower.

“The design that Ashley did is just fabulous. I have been looking for 2 1/2 years, and she did it in one try,” Jankowski said, as she prepared to undergo a session at Neumann’s studio.

Neumann, 24, had worked with cancer scars before.

“It’s definitely something you want to nail for them because you know that means so much to them,” she said.

Two hours later, Jankowski choked up as she looked in the mirror at her new lily.