Could Canada cause multiple sclerosis?

The cheeky rebranding of multiple sclerosis in Canada raises the fair question: why are rates so high here? 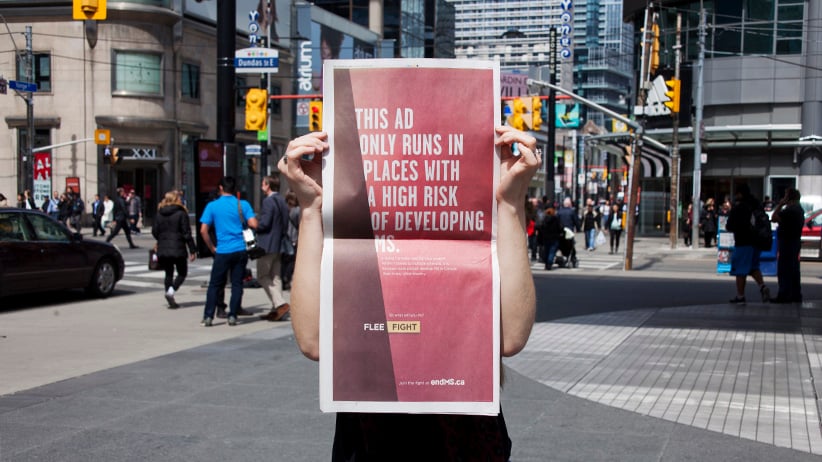 Could Canada cause multiple sclerosis? That’s one takeaway from a new campaign being rolled out by the Multiple Sclerosis Society of Canada that brands MS “Canada’s disease” based on data that the country is home to the world’s highest incidence of the incurable degenerative condition. “Welcome to MS nation,” one billboard reads. “World leader in hockey, maple syrup and multiple sclerosis,” the EndMS.ca website claims. Some messaging appears designed to quash the country’s appeal as an immigration destination: “In Canada, you have a greater risk of developing MS than in any other country,” the campaign reports, noting risk jumps for those who immigrate. The whys of this dubious distinction remain unanswered: “Is it our climate? Our diet? A lack of vitamin D?” No answers are given. But, as with all advertising, hope is extended: “We’re getting close to understanding why.”

The campaign’s directive, “What Will You Do: Flee or Fight?” plays on Canadians’ willingness to take on a challenge, says Owen Charters, the MS Society’s chief marketing and development officer. Those who click “flee” on the website are greeted with the “bawk, bawk” of chickens and links to tongue-in-cheek factoids about countries with a lower incidence of MS (of Mexico: “It’s a macho country, so consider packing at least two sleeveless shirts”) and a Government of Canada website where one can renounce Canadian citizenship. “We wanted to have fun,” says Charters. The “fight” option links to “personal fight stories” of people with MS, reference to vitamin D and pregnancy as possible preventative factors, along with ways to contribute to the society. A social media campaign beginning in May will goad people to “prove how Canadian they are,” which, if Canada is “MS Nation,” means pledging to the MS Society.

“Flee or Fight” is the society’s first fundraising push since its 2008 “endMS” initiative to build a cross-country MS research network. That campaign was completely overshadowed by rogue research from outside the MS establishment that thrust the disease into headlines and pitted the society against its core constituency. Dr. Paolo Zamboni, an Italian venous specialist whose wife has MS, posited the condition was caused by chronic cerebrospinal venous insufficiency (CCSVI), or obstruction of bloodflow in the neck and chest; his small, 65-person study indicated venoplasty, a procedure available in Canada—though not for MS—improved symptoms and seemed to even eradicate disease progression. Zamboni’s hypothesis contradicted the theory of MS that has underlined research for more than 60 years: that MS is an autoimmune condition in which the body attacks itself, destroying myelin, the sheath that coats axons in the central nervous system. CCSVI became a polarizing ﬂashpoint in media and online: MS neurologists denounced Zamboni’s research; MS patients, frustrated with a status quo focused on disease-modifying drugs, embraced CCSVI as a catalyst for activism.

The MS Society of Canada, the official voice of MS in the country since 1948, came under fire from its members when it failed to advocate for CCSVI treatment to be made available in Canada or for clinical trials be fast-tracked (it contributed funds to a clinical trial currently under way). Coverage of people with MS protesting outside legislatures and thousands travelling offshore for CCSVI treatment with wildly varying results posed a PR nightmare for the society. Donations, the society’s major source of funding, fell. But it also provided the public’s first glimpse of the frustrations of the 100,000 Canadians living with MS, a diagnosis that has baffled scientists since French neurologist Jean-Martin Charcot classified “la sclérose en plaques” in 1868. That descriptor describes the scars, or lesions, in the brain and spinal column that characterize the disease. How they get there and their role in disease progression are still unknown. 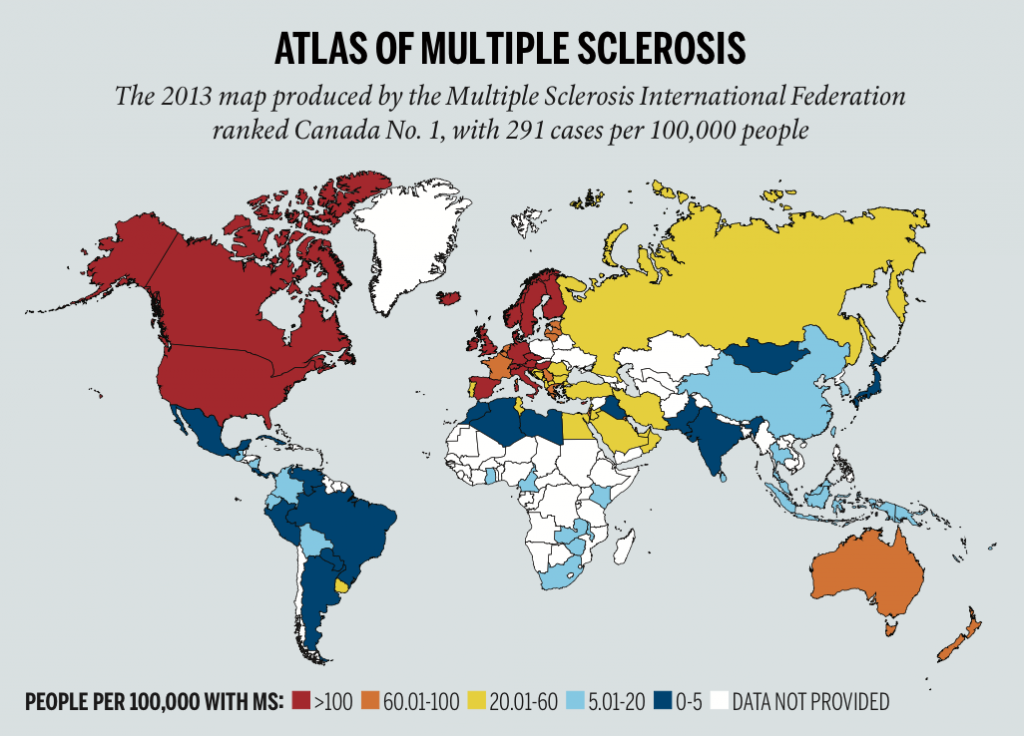 There is no definitive test for MS, commonly diagnosed between ages 15 and 40. Misdiagnosis is a risk. A 2012 study conducted at Oregon Health and Science University found 75 per cent of specialists reported seeing three or more misdiagnosed MS patients within the previous year; of 600 misdiagnosed patients, 280 were on MS drugs, many of which cause serious side effects and can cost more than $50,000 per patient per year. Concern has also been raised that infectious diseases, including Lyme disease, are being misdiagnosed as MS; MRI scans for both appear similar. Lyme disease is curable with antibiotics; being given immunosuppressant drugs, as many MS patients are, worsens it. The National MS Society in the U.S. has added information about Lyme disease to its website. The Canadian MS Society has none.

Fighting MS, like fighting terror, is waging war on an indeterminate enemy. Symptoms and disease progression vary so widely from person to person that it might seem logical to see MS as resulting from varying causes. But as Richard Swiderski, an American medical doctor with MS writes in his 1998 book, Multiple Sclerosis Through History and Human Life, medicine has always assumed that MS has one cause: “The cliché that multiple sclerosis is idiosyncratic and affects each person differently overlies an assumption that it has a single cause.”

The “flee or fight” challenge is a way for the MS Society to reclaim MS messaging, says Charters, who refers to MS as “the brand.” The society was aware the new motto could be read as a critique of those who left the country for CCSVI treatment. “It did cross our minds,” he says. “But the challenge was to find a different story and a reason why MS is relevant to the broadest possible population.” The 2013 MS atlas, produced by the Multiple Sclerosis International Federation, provided “the hook,” he says. Canada ranked first with 291 cases per 100,000 people, followed by Denmark (227), Sweden (189), Hungary (176), Cyprus (175) and the U.K. (164).

Within the MS community, the real “MS nation”—one as diverse as the Canadian nation—the campaign has met with a mixed response. A man diagnosed with primary progressive MS questions “MS nation”: “When ‘nation’ is put at the end of something—‘Ford nation,’ ‘Leaf nation’— it’s positive; it’s saying, ‘Yeah, MS!’ ” Others question the politics behind the “flee-fight” dichotomy: “It’s [their] way or the highway,” says Linda Hume-Sastre, a CCSVI activist who lives in St. Catharines, Ont., who experienced major benefits from CCSVI treatment. “I had to flee to get treatment for a vascular condition I didn’t need to leave the country to get.” Toronto resident Penny Reid objects to the aggressive tone: “It feels like schoolyard politics,” she says. “Am I a chicken if I don’t donate?”

Reid, who was diagnosed with MS 13 years ago at age 30 and stopped working two years ago, is active in the MS community. She supports the society, valuing the connections it provides. “A lot of people remain alienated,” she says. “Some say, ‘It’s all we have,’ which is not a ringing endorsement.” Reid believes Canadians are aware of the prevalence of MS. “Everyone knows someone with MS.”

But many don’t understand the realities of living with the condition, or the fact that many live in the MS closet due to fear of discrimination. Up to 80 per cent of people with MS in Canada will become unemployed. “I would like to see the MS Society creating awareness around the variability of MS symptoms and the struggles of those living with MS,” Reid says. But that runs contrary to the ethos of the society’s fundraising machine. It’s structured to emphasize the positive, if not the accurate, as seen in its “Branding and Graphic Standards” booklet distributed to MS chapters in 2009. All depictions of MS must be upbeat and never depressing or uncertain: “Avoid photos that showcase despair or dependency by people touched by MS,” it instructed. Grimmer realities of living with MS were to be given a positive spin: “Photos with mobility aids should evoke hope rather than pity and be empowering.”

But the less photogenic realities of MS touch all Canadians. The direct costs of caring for and treating Canadians with MS is estimated at $139 million annually, with drugs accounting for almost half of that. The high costs of MS drugs, which are priced on the assumption they delay disease progression and relapses, have come under fire. A study published in the journal Neurology in 2011 reported that the cost-benefit ratio of MS drugs was wildly out of whack and concluded there was urgent need for discussion on how to bring costs down.

Evidence is also mounting that the many commonly prescribed MS drugs don’t slow disease progression as promised. A 2009 study by the Cochrane Collaboration found the efﬁcacy of interferon medication on exacerbations and disease progression in patients with relapsing-remitting MS was “modest.” Research from the University of British Columbia published in the July 2012 Journal of the American Medical Association echoed the finding.

Canadian neurologist George Ebers, one of the first to show an environmental link to MS, has publicly denounced benchmarks used in MS drug clinical trials for not measuring what matters to MS patients, their families and their caregivers: the onset of long-term disability as measured by secondary progressive disease, the point when people need walking assistance or wheelchairs. In a blistering 2013 address to the European Medicines Agency, Ebers revealed that his 25-year tracking study found the frequency of MS relapses doesn’t affect longer-term disability (he found relapses are often associated with better outcomes). Lesion activity as measured by MRIs have “zero value” in predicting disease progression, he said. Focus on “what can be most easily measured epitomizes the last 25 years of MS research,” Ebers concluded, calling for marketers to stop telling people that drugs prevent disability: “They don’t.”

Still, the new MS Society campaign bristles with hope: “If any country will find a cure for MS, it will be Canada.” That statement isn’t based on breakthroughs, per se, says Charters: “It’s an extrapolation—a researcher from the U.S. said that.” He expresses optimism that investment will pay off: “We have the highest research spending per capita on MS in the world,” he says (in 2013, 15 per cent of the society’s revenues went to research and clinics). Charters talks about getting “to the bottom of the mystery about why Canada is the perfect storm for developing MS.” Yet the society’s research will be directed to therapeutics, specifically drugs to treat the progressive form of MS, he says. “We want to increase engine speed at the far end of research spectrum, the part that’s about treatments.”

Ebers, who recently retired after more than 40 years in medicine, is pleased to see MS finally framed as a Canadian health crisis, he tells Maclean’s, though he doubts Canada has the highest incidence. Scotland’s rates are higher, he says. “A lot has to do with a country’s ability to report.” Canada is the perfect research incubator to investigate causality, says Ebers: “Identifying what environmental factors have changed in Canada is key,” he says. “It has nothing to do with genes. Canada has to sort out what’s happened in the past 50 years that has lead to doubling or tripling of the rate of MS.” MS has been a crisis in plain sight for decades, Ebers adds. “We’ve seen rising rates since the ’30s. We have a disease that costs a couple of million a lifetime; it’s gender-specific, with three times as many women being diagnosed. It should have been treated as a four-alarm fire.” And as those diagnosed with MS know, that fire still rages.