Coronavirus: What Canada can expect to happen in the next two weeks

Infectious disease specialist Isaac Bogoch talks about how Canada could avoid a surge in cases, what people should do, and how America dropped the ball 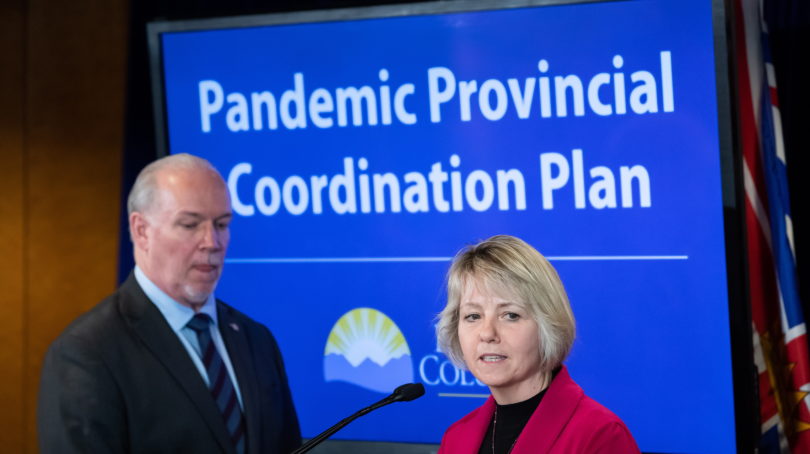 B.C. health officer Dr. Bonnie Henry responds to questions with Premier John Horgan during a news conference about the response to the coronavirus, in Vancouver on March 6, 2020 (CP/Darryl Dyck)

Isaac Bogoch is an infectious disease specialist at Toronto’s University Health Network. He spoke to Aaron Hutchins about what Canada can expect to see in the coming days and weeks as the coronavirus continues to spread, and why Canada may be better prepared than others to weather the crisis and ‘flatten the curve‘ of the outbreak.

What does ‘flattening the curve’ mean for Canadians?

In the context of an epidemic, there’s the potential for a rapid increase in cases. When you plot that out, it looks like a big upswing. The goal is to not have a large, rapid increase in infected individuals.

Even though we know most people will do just fine, if there are a large amount infected, a small portion will need hospitalization—and a smaller proportion of those people will require intensive care. Even if the proportion will be small, if there’s a large number of people infected at once, that has the potential to stretch our health care system to capacity. The goal is to avoid large upswings in patients.

How do you do that?

A lot of things that are effective come under the umbrella of social distancing. We know this is a respiratory virus that can be transmitted by close contact with individuals. So we can design our day-to-day life where there are fewer opportunities for the virus to be transmitted. We’ll still have cases, but we’ll be able to avoid the rapid increases.

Certain jobs can be done remotely, and some people can work from home. Universities can do online teaching. Cancel large events or limit the number of people at large gatherings like sports stadiums or concerts. It could also include choosing not to go to a busy nightclub or a packed restaurant.

Of course, we can’t seal ourselves off from the world around us. We still have to interact, even during an epidemic. Medical officials will sound like a broken record but—really and truly—impeccable hand hygiene works. This is one way to block transmission of this infection at an individual level. And stay at home when you’re sick, even if you feel mildly unwell.

Countries like Italy saw a fast spike in the number of confirmed cases. But places like Japan saw a very slow and steady rise. Is there a sense of what might happen in Canada?

A lot of these surges is because cases were going undetected for a period of time and then you roll out diagnostic testing and realize you have a lot of people with this infection. A lot of it is also driven by your population.

In Italy, the areas that are most affected have an older population. One hundred per cent of the people who’ve died in Italy have been over 60, and the vast majority over 80. If there’s an area with a predominantly younger population, you won’t see as many cases.

Surges have a lot to do with the population, with the medical health infrastructure, how diagnostic testing is going and how it was reported. In Italy, it was probably going on for weeks before diagnostic testing was rolled out—and they realized ‘oh my God!’

So Canada is in better shape because we rolled out diagnostic testing early on?

Yes! And I’m not trying to be a smug Canadian standing on the border looking south, but the United States really dropped the ball. The fact that they weren’t able to scale up their diagnostic testing really meant they were functioning in the dark for weeks. They don’t know what the true burden of the infection is. Diagnostic testing is one of the pillars for surveillance. If you don’t know what you’re dealing with, it’s hard to deal with it. It’s tragic watching that unfold.

Ottawa recently got its first case. So too did Sudbury, Ont. Atlantic Canada has its first presumptive case.

This is going to happen. We are at the beginning of our epidemic. China is at the tail end. South Korea is starting to see fewer cases. Japan and Singapore are ahead of us. We’re at the beginning. We should expect to see more imported cases from more countries, and we’ll see more locally acquired cases. How we fare is dependent on how robust our initiatives are to control this infection—and mitigate that large rise in cases—and how strong our healthcare system.

Is a surge coming to Canada?

We’ve had good guidance from leaders on practical strategies people can take: work from home, learn from home. This will all contribute to lowering the rate of new cases we get in Canada.

We’ll still have an increase in the number of cases, but will likely avoid the massive upswing as we’re seeing in Italy or the Hubei province in China.

What should Canadians expect in the next two weeks?

More cases. That number of 100 [confirmed cases], it is going to be significantly higher when this is all over. We need to just be prepared, and it sounds like people are taking this seriously. And that’s a good thing. It’s better to be over-prepared.

Would you be surprised if we have thousands of cases in two weeks time?

No. Not at all. Well… maybe not in two weeks. That would be a lot in the next two weeks. But I would certainly expect to see more and more cases. It’s hard to predict how many we’ll have or what our epidemiologic curve is going to look like because it’s so dependent on the initiatives people adopt now and in the weeks ahead.

We may blunt our curve because it sounds like Canadians are taking this seriously and practicing these social distancing endeavours. We will be much better for it.

What concerns me is what’s happening in the United States. If they’re having trouble south of the border, first off, I’ll feel bad for them because they’re our friends and neighbours, but also that might pose problems for us north of the border.