Science-ish puts a media release under the microscope 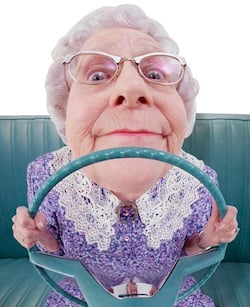 To this day, Dr. John Crosby, a family physician in Cambridge, Ont., remembers the scene perfectly: “She chased me around my waiting room with a walker, screaming and yelling.” The doctor dodged in and out of chairs to avoid getting beaten. “She” was one of his patients. Months later, when she was admitted to hospital and Dr. Crosby went to visit her, she greeted him with: “Oh! If it isn’t Big John Crosby.” She’d never forgive him, she said, not even on her deathbed.

The offense? Dr. Crosby had reported her to the Registrar of Motor Vehicles because she had dementia, and by his calculation, was a potential hazard behind the wheel. In Ontario, according to the Highway Traffic Act, physicians are legally required to report patients who are suffering from a condition that may impair their ability to drive. This is part of their role as guardians in our society, alongside other unpleasant duties like filing reports about gunshot wounds or suspected child abuse. But just because it’s a legal and professional obligation doesn’t make the task any less painful. “It’s one of the hardest things,” said Dr. Crosby. “Patients are always furious with you, no matter what.”

This is why doctors dread telling patients they may be unfit to drive, and it’s why, in 2006, Ontario introduced a financial incentive—$36.25 that doctors could bill the province—for each time they tell on a patient.

Six years later, a New England Journal of Medicine study released today, finds that the rate of reporting by doctors has increased since 2006 and patients who’d received a formal RMV warning were 40 to 45 per cent less likely to be involved in a serious car crash. “In our study, the baseline risk in this cohort of patients was 4.7 serious crashes per 1,000 drivers per year,” said Dr. Donald Redelmeier, a senior scientist at the Institute for Clinical Evaluative Sciences (ICES) and lead author of the report. After the warning, the risk came down to 2.7 serious crashes per 1,000 drivers per year.

So did Ontario’s fee avoid car accidents and save lives? That’s certainly what the media release introducing the study suggests: “Physicians’ warnings to patients who are potentially medically unfit to drive led to a 45 per cent decrease in serious trauma from road crashes, according to research by the Institute for Clinical Evaluative Sciences. This effect was seen after the Ontario Government introduced a financial incentive for doctors to report such patients in 2006.”

Not so fast, though. First of all, it’s difficult to say whether it was the warning that saved lives. As Dr. Redelmeier told Science-ish, the decreased risk may reflect the fact that patients drive less or with greater care or even quit driving all together after a doctor reports them. “Everybody gets a threatening letter from their licensing agency, but not everyone gets their license suspended,” he said, adding that happens in 10 to 30 per cent of cases. As well, there was no way of comparing dangerous Ontario drivers who didn’t get a warning with the 100,000 Ontario motorists—or 0.01 per cent—studied by Dr. Redelmeier. Besides, some doctors don’t even know they can be paid for this service so there may be reporting without billing.

Secondly, the research does not establish that the increase in the rate of reporting was caused by the fee. Dr. Redelmeier did notice the increase but he didn’t set out to study the effectiveness of this financial incentive; he was just using physicians’ billings as a way to track warnings and link those to the rate of serious car crashes. He didn’t even have data on the number of warnings issued prior to 2006, so he couldn’t know what things looked like before the government introduced the fee.

One scientist who studies financial incentives and quality improvement in medicine, Dr. Tara Kiran at St. Michael’s Hospital in Toronto, pointed out that the uptick in reporting may well have been caused by the introduction of a new form that “standardized the reporting process” and made it simpler and more convenient for doctors to submit. That also happened in 2006, in conjunction with the new fee for reporting. And there could have been other changes that caused an increase, such as more pressure from medical regulators on doctors to report unfit drivers.

Unsurprisingly, Dr. Redelmeier’s conclusions summarized on the first page of the study are rather cautious: “Physician warnings to patients who are potentially unfit to drive may [my emphasis] contribute to a decrease in subsequent trauma from road crashes, yet they may also exacerbate mood disorders and compromise the doctor-patient relationship.”

All this is a cautionary tale for health-care observers about the perils of reading only media releases and for researchers to check PR spins on their studies. As it stands, whether it’s about reporting dangerous drivers or other tasks, we don’t yet know how financial incentives for physicians work, an issue Science-ish has explored in the past.

Still, Ontario could be an interesting incubator for such a study. It’s the first region in the world that started compensating doctors for reporting unsafe drivers. There are six other Canadian regions with mandatory reporting, but none of them have this added financial bonus. Looking closely at the impact of the fee in Ontario, or comparing jurisdictions that require physicians to report with ones that don’t, could help us understand the effects of mandatory reporting. It could also shed light on what makes doctors go through the headache of telling patients the painful truth—and possibly being chased around the waiting room with a cane. (Science-ish could not find any such review, but welcomes your advice if you know of one.)

For Dr. Crosby, $36 is no incentive. In fact, he didn’t even know he could bill for the task. For him, the real incentive is this: “I know I’m saving someone’s life.”