Among hundreds of strangers who have offered to donate their organs to Phuoc and Binh Wagner, a small few appear to be the ideal match

Their story has triggered headlines around the world: twin sisters desperate for life-saving liver transplants—and a father with only one organ to give. In a matter of days, more than 500 strangers (and counting) have volunteered to be the second donor, offering to undergo major surgery to help a Canadian family they’ve never met. “I actually received a health history from someone in New Zealand,” says Dr. Gary Levy of Toronto General Hospital UHN, who is screening the flood of applicants. “They are from all over.”

Poring over that long list, doctors have now identified eight ideal donors—and, if all goes well, three-year-old Binh Wagner, like her sister, Phuoc, will receive a healthy new liver within the next month. “People saw these very sick children and it hit a strong chord,” says Levy, a veteran in the field of organ transplantation who has never witnessed such an overwhelming reaction to one story. “They saw that these girls couldn’t live a normal life and they just said: ‘There is no way I could live with myself if I don’t step forward to try and help.’ ”

Because of Binh’s age, doctors prefer a younger donor, no older than 40. Gender doesn’t matter, but the candidate must be in good health (in this case, a body-mass index below 25) and share a compatible blood type (A or O). Close to 80 applicants made the initial cut, Levy says, but a more detailed analysis narrowed the group down to eight who best fit the medical criteria. Although their identities are anonymous, all eight are from Ontario.

Levy has met five of the shortlisted candidates, and plans to interview the remaining three this week. Following standard protocol, each will undergo a battery of tests in the coming days, including CT scans, MRIs and a psychological exam. Doctors independent of the hospital’s transplant program will also conduct assessments, ensuring, for example, that none was coerced into coming forward. “We are under pressure to do this in a reasonably fast period of time,” Levy says. “With children, we move quickly. We certainly don’t want to lose a child when we have the possibility of saving a life.”

Eighteen months old when they were adopted from a Vietnamese orphanage by Michael and Johanne Wagner, the now-famous twins were so sick, so emaciated, that their odds of survival appeared slim. They weighed barely nine pounds each, the same as many newborns. After the girls reached their new home in Kingston, Ont., doctors confirmed the diagnosis: Alagille syndrome, a rare genetic disorder that attacks the liver, among other vital organs. Without a transplant, both would surely die.

The Wagners (who have seven other children; five biological and two adopted) turned to social media for help, launching a Facebook campaign to seek out potential donors. In the meantime, doctors discovered that Michael’s liver was a match—which meant he could save one of his daughters, but not the other.

After a complex medical assessment, a team of experts concluded that Phuoc was the twin in more immediate need of a transplant. Binh would have to wait for another donor to surface. 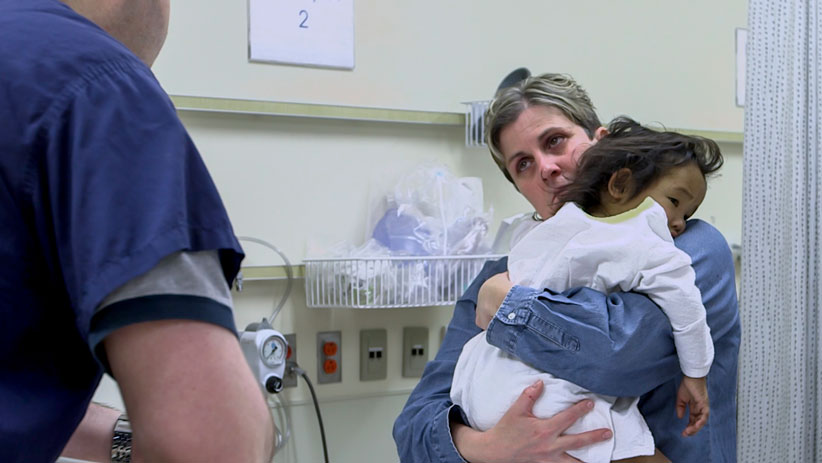 Michael Wagner donates liver to one of his twin daughters, Phuoc Wagner (Courtesy of SickKids & UHN)

Both Phuoc and her father went under the knife last Tuesday. At one downtown hospital, Toronto General, surgeons sliced out a small portion of Michael’s liver and packed it in ice; staff then walked the organ across the street, via underground tunnel, to the Hospital for Sick Children, where a separate team of doctors sewed the specimen into Phuoc. A week later, Michael is now on his feet and slowly recovering. (His liver will eventually grow back to full size.) Phuoc, meanwhile, continues to be closely monitored to ensure her small body does not reject the new organ. It could be weeks, if not months, before she is able to leave the hospital.

Her sister is up next. Pending a major setback, Binh’s surgery should occur before mid-March.

Volunteering to be a live liver donor is an arduous process, to say the least. The surgery alone requires one week of in-hospital recovery, if not more, and although fatal complications are extremely rare, an operation always carries the risk of death. Once discharged from hospital, a donor must also stay off work for three months—a costly sacrifice. At SickKids, where surgeons perform an annual average of 20 live liver transplants in collaboration with Toronto General, almost all are like the one involving Michael and Phuoc: parent to child. Stranger to stranger is very rare.

That so many strangers are willing to endure such an ordeal to help Binh is “exciting and heartwarming,” Dr. Levy says. “One person I spoke to said: ‘I refuse to take no for an answer, and if you don’t accept my candidacy, I’m going to come to Toronto and picket in front of your hospital,’ ” he tells Maclean‘s. “Some people are very, very determined, and it’s great to hear.”

In fact, the twins’ viral story will likely end up saving more lives than just their own. Although all eight of the shortlisted candidates signed up because they were so moved by the Wagners’ plight, Levy says all have agreed to donate to other patients, if they’re not the one chosen to help Binh. “They were touched by the story,” he says. “But I told them that we have many, many needy children and adults who would benefit from that gift.”

In a perfect scenario, of course, nobody would have to come forward. Live donors are only a necessary last resort, because so few Canadians register to be end-of-life organ donors. “People take risks and go to great lengths to have a part of their liver removed and given to a recipient,” says Dr. Steven Paraskevas, a surgeon at McGill University Health Centre and president of the Canadian Society of Transplantation. “That has come out of need, because there are not enough deceased donors to meet the needs of those waiting for a liver. If the system were able to meet the demand, some of these measures would probably not need to be taken.”

In Ontario, for instance, a person dies every three days while waiting for an organ transplant—yet only 26 per cent of eligible residents (3.1 million out of 11.8 million) have registered to part with their organs after death. “Michael Wagner put his health and his safety at risk; he is the father of nine children,” says Ronnie Gavsie, president of Trillium Gift of Life Network, Ontario’s organ and tissue donation agency. “Would we as Ontarians choose to put the father of nine at risk if we had an alternative? We do have an alternative. There is no cost, there is no pain, there is no risk to donating at the end of your life.”

If nothing else, Dr. Levy hopes that message is the Wagner twins’ lasting legacy. “Personally, I’m absolutely delighted with the fact that it’s increasing awareness about the need for organ donation to help desperately ill people,” he says. “Deceased donation is our preferred way. As I said to the potential donors, it doesn’t make me thrilled that we’re taking young people in the prime of life and subjecting them to a life-threatening operation. But we do have the confidence that we’ve developed the kind of program that we can do it safely and very professionally.”