Stamping out the virus regionally in Canada, without a vaccine, is an enticing possibility. But what are the costs? 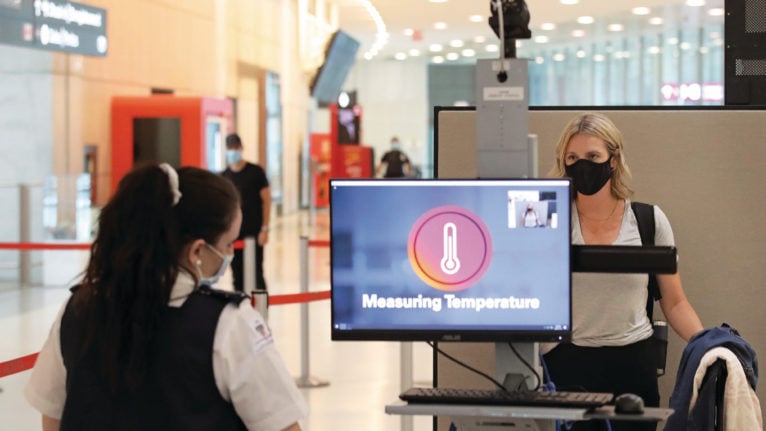 On July 3, the day Atlantic Canada launched its “travel bubble,” Prince Edward Island had enjoyed more than nine weeks with no new cases of COVID-19. Test results were pending for 48 people, but the 27 confirmed cases that had surfaced since the pandemic began had recovered without the need for hospitalization. Regarded rosily, it seemed the island was enjoying its own little bubble, effectively eliminating the novel coronavirus within its boundaries.

But P.E.I.’s bubble would quickly burst—the following day, in fact, when it recorded three new cases. The larger buffer cast over the region was supposed to protect the East Coast by screening incoming travellers. Yet all three diagnoses were connected to Islanders who had travelled outside the province. Premier Dennis King called the news a “bit of a gut shot”—a wake-up call for those who figured the province could keep the virus at bay.

Then again, anybody with an eye toward New Zealand would have seen it coming.

On June 8, the island country’s health ministry announced that the last remaining case of COVID-19 had recovered. After 17 days with no positive test results, and 40 without community spread, Prime Minister Jacinda Ardern declared that New Zealand had “eliminated transmission” of the virus—a strategic goal the government had been working toward since March, when it initiated a nationwide lockdown followed by seven weeks of stay-at-home orders.

The E-word became a point of great national pride, but just eight days after Ardern made her declaration, New Zealand reported that two women recently arrived from the United Kingdom had tested positive. Over the next two weeks, a string of cases trickled into the country from overseas travel, and by Aug. 11, its 102-day streak without community transmission had come to an end, with an outbreak among four members of a family in Auckland.

The setback wasn’t unexpected. In her June announcement, Ardern had warned Kiwis that the virus would certainly return. As for the country’s ambitious strategic goal, some perspective seemed in order: “Elimination is not a point in time,” the PM said. “It is a sustained effort.”

Not to be confused with “eradication”—a term that, in the argot of infectious disease, refers to a pathogen being wiped from the face of the planet (think smallpox)—“elimination” is achieved at a regional level: it means efforts to control an infective agent have stamped out transmission, rendering it inactive within a province, a country or even a hemisphere. As the world waits on a vaccine, and some countries brace for a potential second wave, New Zealand’s short-lived accomplishment has led some to ponder whether Canada should be setting a similar goal.

READ: How anti-vaxxers could disrupt the cure for the COVID-19 pandemic

Despite a resurgence in outbreaks, New Zealand’s focus on elimination has helped it keep an enviably low case count. As of mid-August, the country of about five million people had less than 1,300 confirmed cases and 22 deaths. By comparison, British Columbia, with a similar population count, had reported more than 4,300 cases of COVID-19, and 196 deaths connected to the disease.

With the exception of Nunavut and (to a lesser extent) the Northwest Territories, Canada has seen its own uptick in infections following loosened restrictions and reopened economies over the summer. Some Atlantic provinces have more or less planked their curves, raising at least the possibility of squelching it within the region. But most medical officers of health, including Nova Scotia’s Robert Strang, are reluctant to prescribe elimination as a strategy.

The conversation among public health experts in Canada, Strang says, should focus on limiting transmission and minimizing the burden on health-care systems. What may work for a South Pacific island nation isn’t necessarily feasible for a Canadian province, he adds, much less the entire country: “We can’t lock ourselves away from the rest of Canada. We have to appreciate the substantive harms that have resulted from the necessary restrictive measures to control the first wave—significant health, social and economic harms—and we’re just really starting to understand that more.”

In the early months of the pandemic, hospitals across the country had cancelled elective surgeries, resulting in backlogs. By May, Statistics Canada reported more than three million job losses connected to the economic fallout from the crisis. The agency also noted that stay-at-home orders could increase the risk of domestic violence among vulnerable families, and compromise the social networks and supports of those already experiencing isolation before the crisis.

Even in P.E.I., Chief Health Officer Heather Morrison says the cost of achieving elimination would be too high. With the benefit of hindsight, she is still hesitant to describe the lull as such. “I don’t think we ever thought about it as being totally eliminated because the risk of importation has always been there,” she said. “As long as the virus exists in the country and in the world, it’s going to be difficult to eliminate.”

READ: There won’t be a seasonal second wave of coronavirus, there will be a behavioural one

Difficult not least because school is set to resume in the fall, with cold-and-flu season sure to follow. Experts aren’t sure how the winter will affect transmission of the coronavirus, since people are generally more conscious of spreading germs during those months, when other respiratory viruses tend to peak.

Still, a second wave is not a foregone conclusion, says Irfan Dhalla, a physician and a vice-president at Unity Health Toronto; nor is elimination an impractical pursuit if it sets the country on a course to lower case counts and outbreaks. Far from necessitating another round of lockdowns, Dhalla says, aiming for elimination in Canada would involve breaking chains of transmission through focused public health interventions, such as quicker turnaround times on diagnoses, and education campaigns to encourage testing as soon as symptoms appear. “For the most part, it is about finding every case, chasing down every contact, quarantining people and supporting them through their isolation,” he explains.

The problem with planning to mitigate transmission as opposed to eliminating it, Dhalla adds, is that the former aims for low-level circulation that can easily erupt to high-level spread: “If we don’t set an ambitious goal, then we don’t do those things, and we shouldn’t be surprised when we see outbreaks.” Dhalla, however, along with other experts, acknowledges that true elimination is at least as far away as a viable vaccine.

Isaac Bogoch, an infectious disease specialist at the University of Toronto, agrees that aiming to eliminate the virus without a viable vaccine is a laudable goal. But gaps in diagnostic processes and the body of knowledge surrounding the pathogen, he says, make it unrealistic. Tests, while functional, are not 100 per cent accurate. Surveillance systems for the early detection of outbreaks (in long-term care homes, e.g.), while decent, are far from perfect. And the question of whether or not the virus can hide in non-human reservoirs, such as animals, still hovers in the background.

“To eliminate a disease, you really need something like a biologic intervention, such as a vaccine or a drug to prevent infection,” Bogoch says. “Smallpox could be eliminated because it was easy to diagnose: you had an effective vaccine, you had good surveillance systems, and it didn’t really affect other animals other than humans.”

Then there’s the elephant in the room: Canada shares the longest land border in the world with the most heavily affected country on the planet—a boundary essential workers from both countries cross every day to supply vital goods and services. The three cases that broke P.E.I.’s streak in July were among essential workers, two of them connected to an American traveller who had contact with an Islander who’d been in Nova Scotia. All of which is to say that, with the high risk of reimportation, the controls needed to effectively extinguish the spread would be punishingly severe. “It’s not going to work in Canada because getting people to live in hermetically sealed bubbles doesn’t work well in real-world practice,” says Bogoch. “We’re able to lock down, but not completely, because people need essential goods and services.”

Even with the potential help of a vaccine, there’s still the unanswered question of its efficacy on the virus, and the extent of immunity it provides. As Strang notes from Nova Scotia: “All we have to do is look at the influenza vaccine and understand the limitations of a vaccine against a viral respiratory disease, and the challenges of creating a vaccine that creates long-lasting immunity.”

Either way, until the day arrives that a vaccine can support such a goal, both Strang and Morrison say their provinces will look to strike a balance between managing the disease and accommodating residents’ need to connect with one another, and with the world beyond. “I think this province would like to see the virus eliminated, or feel like it’s eliminated,” says Morrison. But for now, she concedes, P.E.I. must do like its counterparts in New Zealand and the rest of the world: reopen with caution, remain on alert and cope with whatever the pandemic sends its way.

This article appears in print in the October 2020 issue of Maclean’s magazine with the headline, “The elimination game.” Subscribe to the monthly print magazine here.