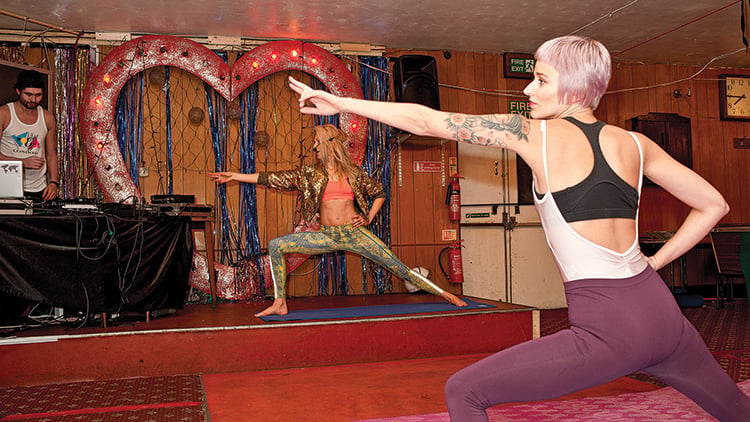 Yoga classes are generally tranquil happenings involving steady stretching and woodsy incense. They don’t tend to include iridescent leotards and choreographed dance moves set to propulsive Janet Jackson tracks. Unless, of course, it’s a voga class: yoga combined with voguing, the same dance popularized by Madonna when she once urged fans to strike a pose. “It’s guaranteed to make you feel amazing,” says Juliet Murrell, creator of the hybrid workout, run from a studio in London. Participants practise yoga from the waist down; meanwhile, the upper half vogues, performing a dance combining the angular arms of hieroglyphs with the body contortions of magazine models. It’s all done at an aerobic speed.

The dance had its first mainstream moment nearly 25 years ago. After Madonna’s 1990 hit Vogue dominated MTV, a documentary called Paris Is Burning examined its origins in Harlem’s underground drag culture. Created by black and Latino gay kids in competitive fashion shows called balls—where participants aim to win trophies by expressing the most outrageous version of themselves through costume, attitude and “realness”—voguing evolved as a dance fight, like breakdancing. When the film won a Grand Jury Prize at Sundance, the fashion world took notice: Stars of the film were enlisted to teach supermodels how to really command a runway.

Murrell adores Paris Is Burning. “I love how everyone is marginalized and poor and made this awesome art form,” she says, noting that the confidence exuded by ball walkers is the same attitude she suggests students bring to their yoga practice. Voguing and yoga, she argues, are natural bedfellows.

Whether or not that’s true, voga is right on trend, as renewed interest in “ball culture” is rippling through mainstream art. Swedish pop duo Icona Pop recently released a music video for All Night that features a raucous vogue-off, with dancers in drag competing at a ballroom fashion show. Last fall, a stunning photo book, Legendary: Inside the House Ballroom Scene by Gerard Gaskin, won the prestigious Honickman First Book Prize in photography. And last month, Toronto’s Harbourfront’s World Stage, an international performance series, partnered with the city’s House of Nuance to create the #artlive Vogue Ball, bringing the newest incarnation of ball culture from the fringes to the main stage.

“When House of Nuance asked me to judge one of their balls last summer, I was blown away,” says Tina Rasmussen, artistic director at World Stage. “Old, young, straight, queer—all just throwing on a wig and strutting down the runway. I still get goose bumps when I think about it.” It was an unconventional show, but just the type of cutting-edge art she wanted to curate. Rasmussen hoped the Harbourfront ball would encourage traditional art patrons to abandon inhibitions and walk the runway with seasoned voguers, who were on hand that night to offer basic tutorials.

Unlike the usual ad hoc affairs held in a bar’s backroom, this ball had red-carpet arrival and a signature cocktail. It also encouraged applause, notes Travoy Deer, a ball veteran who emceed the event and isn’t used to gold stars being awarded so readily. “There is incredible competition in the regular scene,” he says. “Vogue is studied like ballet, with that much focus and attention.”

Away from the spotlight, voguing has evolved in the underground realm to become more elaborate and layered. Vogue dance elements are as specific as those found in a gymnastics competition: hand performance, floor performance, duck walk, spins and dips. A good voguer blends the elements in a continuous flow to a song no slower than the average Rihanna club hit. Like ballet, voguing is intricate and highly stylized. Unlike ballet, says Deer, it’s an art born from the streets where expertise is less respected. Still, “it’s not just ‘do what you feel’— there’s more to it than using your hands to make an imaginary box around your face.”

Which makes purists a little skeptical of adaptations such as voga. “It’s great that she’s enthusiastic,” says Deer of Murrell, “but who taught her to vogue?”