Jane Fonda takes it, and she’s still having sex at 73. Why aren’t you? 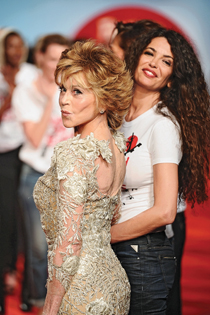 On Jane Fonda’s recent media blitz to promote her new book, Prime Time, the 73-year-old looked radiant. She attributed her glow to the fact that she’s having great sex in her seventies—thanks partly, she said, to the testosterone she’s been taking. As Fonda gushed about the virtues of using the hormone in a “gel, pill or patch” as a libido enhancer, some experts were horrified. “Jane looks great,” says Gloria Gutman, a gerontology expert at Simon Fraser University in Burnaby, B.C. “However, if she is doing it by juicing herself up on testosterone, that is scary.”

Scary or not, Fonda isn’t the only star talking about hormones. Suzanne Somers devotes a whole page on her website to it, and Sylvester Stallone has revealed he’s taken human growth hormone and testosterone to bulk up. The value of these treatments is hotly debated. Women on testosterone can experience side effects like hair growth and male-pattern baldness, oily skin, a deepening voice, and even enlargement of the clitoris. (Fonda went off it during her book tour because it was giving her acne.) Gutman and others argue the long-term effects aren’t really understood. But these hormonal treatments are more in demand than ever.

Testosterone is typically considered the “male” hormone, but womens’ bodies produce it too; it affects everything from muscle mass and bone density to libido. About 12 per cent of women aged 50 to 59 suffer “frequently” from problems with desire, says Dr. James A. Simon, a clinical professor of obstetrics and gynecology at George Washington University, and half say it causes them “some kind of distress.” In 2004, Simon led a study to see whether an experimental testosterone patch could enhance the sex drive of women who’d undergone surgical menopause, where the uterus and both ovaries are removed. These women saw one or two additional episodes of sexual activity a month. “It doesn’t sound like very much,” says Simon, but it was a 74 per cent increase over the average.

Concerned about the patch’s safety and potential side effects, the U.S. Food and Drug Administration wouldn’t license it. But Simon, who runs a private clinic and research centre in Washington, says the “exact same product” is available in Europe. He maintains that testosterone is a viable therapy for some older women who struggle with decreased libido, and that—if properly administered—side effects are “minimal or non-existent.”

Canada hasn’t approved any testosterone products to enhance a woman’s libido, but compounding pharmacies (which mix made-to-order treatments) do custom orders if the patient has a prescription. Apex Compounding Pharmacy in Toronto does brisk business in bio-identical hormones, which have the same chemical structure as what’s produced in our bodies. Physician-owner Ara Papazian says he’s seeing “more and more” women in their late forties and early fifties seeking testosterone to boost sex drive. When a client comes in, he’ll perform a saliva test to measure hormone levels. If it looks like they’d benefit from treatment, he’ll write to their physician requesting a prescription. “The first question I’ll ask a patient is, ‘Is your physician laid-back?’ ” Nine times out of 10, Papazian says, the doctor agrees to write it.

But even if we have less sex as we age, a new study suggests sexual satisfaction doesn’t decline. A team led by Wesley Thompson of the University of California at San Diego analyzed surveys from 1,235 women aged 60 to 89. They found that, of those who were married or in an intimate relationship, 70 per cent in their sixties had been sexually active within the past six months; among women in their seventies, it was 57 per cent, and in their eighties, 31 per cent. Even though sexual activity and function were observed to decline, “to our surprise, sexual satisfaction seems to remain stable,” Thompson says. This could be for all sorts of reasons, like the wisdom and perspective that comes with age.

Even so, low libido is an extremely common complaint. “It’s bar none the most common thing I see,” says Sue McGarvie, an Ottawa sex therapist. If a hormone imbalance seems to be the problem, she’ll send the patient to a doctor. McGarvie, 45, uses hormonal supplements herself: she’s taking testosterone, progesterone, and DHA (an omega-3 fatty acid). The testosterone comes in an ointment that she rubs into her leg “like moisturizing cream.” McGarvie feels bio-identical hormones are safe, and monitors her health with her doctor. “It stops the pre-menopause stuff,” she says. “It feels like I’m back to 30.”

Hormone treatments for post-menopausal women have been especially controversial since 2002, when the U.S. National Institutes of Health put an early stop to a major clinical trial of hormone therapy (combined estrogen and progestin) after seeing an increased risk of breast cancer. Today, hormone treatments are used to treat symptoms of menopause, like hot flashes; if used for treatment, “it should be in the lowest dose, for the shortest period of time,” says Dr. Jerilynn Prior, a professor of endocrinology at the University of British Columbia and scientific director of the Centre for Menstrual Cycle and Ovulation Research. Because of concern over side effects, using testosterone to boost libido “really has not been advocated for women,” says Dr. Margery Gass, executive director of the North American Menopause Society.

Although the testosterone patch hasn’t been approved here, new products could be available soon. According to Dr. Christine Derzko, associate professor at the University of Toronto, North American trials of a vaginal suppository that delivers androgens (the same family of hormones to which testosterone belongs) are now under way. Early results are promising, she says, and show benefits in desire and orgasm, as well as decreased pain during sex, which is often caused by vaginal dryness or muscle spasms. Instead of circulating hormones through the bloodstream, the suppository delivers them locally.

Loss of sexual desire is a complicated problem—one that’s to be expected, to some extent, with age—and it touches on many factors, including a person’s overall mood, physical and mental health, self-image and relationship, to name just a few. “All these things are vitally important, probably far more than hormone levels,” Gass says. While men who struggle with declining sex drive can get a prescription for Viagra, Health Canada hasn’t approved any hormone, drug, or natural health product to do the same for women. Until something becomes available, Fonda’s claims that she’s found the secret to eternal sex are bound to make waves.